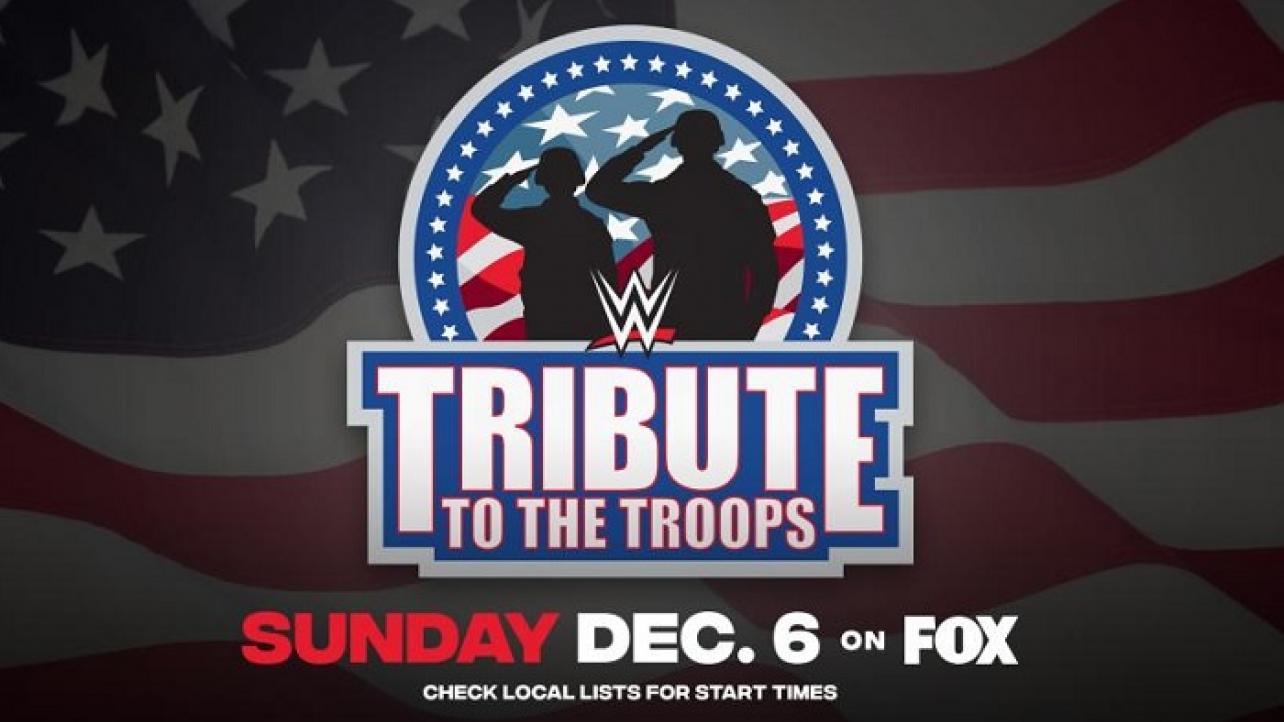 18th Annual WWE Tribute To The Troops Returning As TV Special On FOX On Dec. 6, Celebrity Guests To Appear

After a one-year hiatus in which it was not aired, the WWE Tribute to the Troops annual special will be back on television this year, as the company and FOX Sports issued press releaseses this morning to formally announce the news.

Check out the official details regarding the 18th annual installment of the WWE Tribute to the Troops special via the press release below.

18th ANNUAL WWE® TRIBUTE TO THE TROOPS® TO AIR ON FOX

“Supporting the United States military year-round is an essential part of FOX Sports’ mission, and partnering with WWE on their Tribute to the Troops is an incredible extension of this ongoing commitment,” said Eric Shanks, Chief Executive Officer & Executive Producer, FOX Sports.

“This is a unique time and we look forward to providing our troops and their families with an interactive experience that only WWE can deliver as we celebrate our servicemen and women with millions of our fans watching at home on FOX,” said Vince McMahon, WWE Chairman & CEO.

In what is considered TV’s most patriotic and heartwarming show of the year, WWE began Tribute to the Troops in 2003 to honor our servicemen and women and their families and thank them for their continued sacrifice to our country. In addition to the event, WWE will also be hosting virtual meet and greet sessions with WWE Superstars and military members.

With more than 37,000 active duty Soldiers and Airmen assigned to the post along with more than 100,000 family members, Fort Hood in Texas is the largest active duty armored post in the United States Armed Forces and trains an additional 22,000 Reserve Soldiers annually.

USS John C. Stennis (CVN 74) is a Nimitz-class aircraft carrier responsible for protecting American interests across the globe. With 4.5 acres of sovereign U.S. territory, 75 aircraft, and a crew in excess of 5,000 Sailors while deployed, the John C. Stennis is one of the most lethal assets, capable of engaging in sustained power projection operations in support of U.S. and coalition forces.

The pinnacle in Naval Aviation training, Naval Air Station Fallon is the US Navy’s “Carrier in the Desert.” As the home of TOPGUN, the air base in Nevada’s high desert trains aircrews and Navy SEALS before they deploy around the globe.

Naval Air Weapons Station China Lake in Ridgecrest, CA, covers more than 1.1 million acres and is known for research, development and testing of some of the world’s most cutting-edge weapons, including the Sidewinder & Tomahawk.

In the coming weeks, WWE will announce celebrity guests from the world of sports and entertainment that will take part in the Tribute to the Troops broadcast on FOX.

About WWE
WWE, a publicly traded company (NYSE: WWE), is an integrated media organization and recognized leader in global entertainment. The Company consists of a portfolio of businesses that create and deliver original content 52 weeks a year to a global audience. WWE is committed to family friendly entertainment on its television programming, pay-per-view, digital media and publishing platforms. WWE’s TV-PG, family-friendly programming can be seen in more than 800 million homes worldwide in 28 languages. WWE Network, the first-ever 24/7 over-the-top premium network that includes all live pay-per-views, scheduled programming and a massive video-on-demand library, is currently available in more than 180 countries. The Company is headquartered in Stamford, Conn., with offices in New York, Los Angeles, London, Mexico City, Mumbai, Shanghai, Singapore, Dubai, Munich and Tokyo.

REACTION: WWE Tribute To The Troops 2020

18th Annual WWE Tribute To The Troops Returning As TV Special On FOX On Dec. 6, Celebrity Guests To Appear