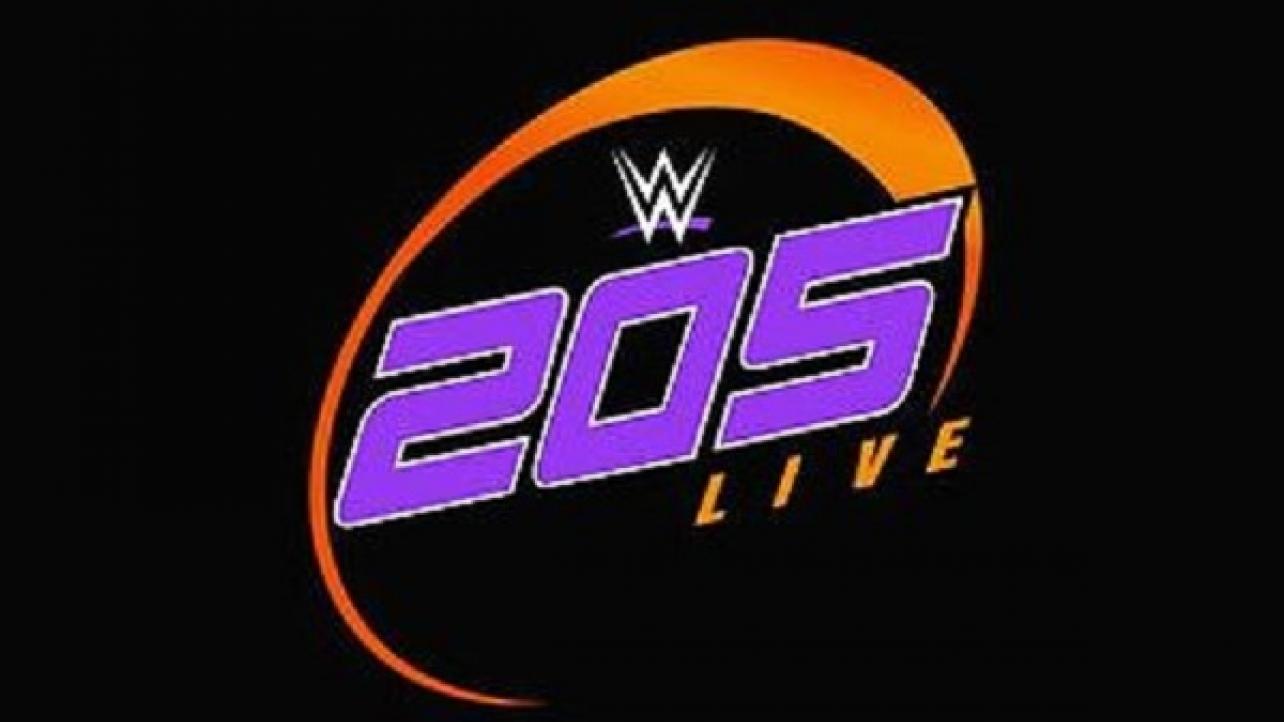 Following this week’s edition of WWE Friday Night SmackDown On FOX, the action continued with the latest episode of WWE 205 Live premiering on the WWE Network.

Follow our ongoing, live results coverage of WWE 205 Live from the beginning of the show until the end right here on this page.

The Friday, November 8, 2019 episode of WWE 205 Live was pre-recorded prior to NXT in the NXT Arena at Full Sail University in Winter Park, Florida instead of airing live after SmackDown as it normally does.

We enter the arena showing The Brian Kendrick wasting no time running down the ramp and into the ring where he circles with his arms spread as he removes his leather jacket. Mansoor’s music sounds in the arena next as he makes his way to the ring, climbing to the top rope pointing to the crowd as he removes his gear. The bell rings and the match begins as the crowd chants “Let’s go Kendrick” and half are

The Brian Kendrick vs. Mansoor

A lot of back and forth between both men in this match-up early on. Mansoor hits a power move leading into a Dropkick on Mansoor. A blow to the midsection of Mansoor by Kendrick, Mansoor counters with a power move of his own, followed by a Sunset Flip by Mansoor. The match makes it’s way to the outside of the ring. Kendrick throws Mansoor into the baracade, where Mansoor gets caught up, wrapping his arm around the railing. Kendrick gets a kick to the arm of Mansoor who is still wrapped up. Kendrick makes his way back into the ring, waiting on Mansoor.

Mansoor makes finally makes his way back into the ring where Kendrick is lying in wait, hitting a Russian Leg Sweep on Mansoor. Kendrick continues by shoving his knee hard into the hand and wrist of Mansoor. Mansoor with strong chops to the chest of The Brian Kendrick. The crowd continues to be split, clapping and booing in unison, only at opposite times. Kendrick locks in an Armbar. Mansoor comes back with more chops once again.

Kendrick takes a Clothesline from Mansoor, followed by an Enzuigiri. Mansoor with a Falcon Arrow on Kendrick for the two count. Kendrick kicks out just in time. Mansoor still holding his injured arm between each takedown. Mansoor lifts Kendrick over his head onto his shoulders, Kendrick once again attacking the injured arm of Mansoor. Mansoor goes for a power move, Kendrick counters with the Half and Half Suplex as the crowd begins clapping. Kendrick hits a Powerslam on Mansoor.

Mansoor is face down on the mat with a gazed out look on his face. Kendrick goes for Captain’s Hook, to no avail. Mansoor counters catching Kendrick in a mid-Sliced Bread attempt with a quick roll up of his own for the three count pinfall. Mansoor rolls out of the ring quickly, smiling at Kendrick who is left sitting in the ring.

Aiden English and Tom Phillips are seen at the broadcaster’s desk recalling the match at NXT 2 days ago between Tony Nese and Angel Garza for the #1 Contender’s match-up.

Tony Nese makes his way to the top of the ramp where he stops to count each one of his abs, counting to eight before making his way down the ramp and into the ring. Out next, Angel Garza who acts like he’s going to slap the hands of fans, pulling away before they can. Garza stops by one female fan on the outside of the ring and points to his cheek for a kiss, she complies. Garza enters the ring and the bell rings to begin this match.

Early on, both men grab each other by the hair. Garza finally takes Nese down as both men are now grappling on the mat momentarily, as both men struggle to make their way back to their feet. Nese with a single-leg pick up. Garza attempts a single leg submission. Back and forth reversals between both men, crowd claps. Both men back to their feet, circling the ring. Waistlock takedown by Nese who now shows off his own guns. Garza gets back to his feet. Flying Head Scissors by Garza onto Nese. Back and forth chops to the chest on both men. The crowd “Oh’s!” after each chop.

Nese with an elbow to the face of Garza. Garza lifts Nese onto the top rope. Garza with a boot to the face of Nese at top turnbuckle. Sunset Bomb attempt, Nese gets a PowerBomb on Garza’s pants, Garza still standing on the top turnbuckle as we go to commercial momentarily.

As we come back from commercial, Garza lights up Nese. Wrecking ball Dropkick by Angel Garza as he makes his way to the second turnbuckle, followed by a Flying Moonsault onto Nese with a leap of faith. Both men make their way back into the ring. Garza hits a Butterfly Backbreaker, with a two count pin attempt. Garza pulls Nese back to his feet, Nese slips between the legs of Garza and rolls up for a pin attempt of his own. Garza hits a Pump Handle Falcon Arrow for a near fall.

Nese tries again, Garza counters with a Lung Blower on Nese. Garza attempt to go airborne once again, Nese jumps to his feet and slaps Garza across the face sending him onto the outside of the ropes, still standing on the mat. A Tornado DDT by Nese on the ground outside of the ring. Nese with a 450 Splash onto Garza and pins, referee stops the count noticing Garza’s boot on the bottom rope. Garza gets caught with a right hand.

Garza with a boot to the face of Nese. Echoing chops to the chest back and forth by both men. Garza attempts to go airborne again, misses, but gets a Wing Clipper on Nese followed by the three count pin for the win. The referee raises the hand of Angel Garza in victory.

Lio Rush comes out to the top of the ramp saying, “I’m looking forward to it…” with a good sportsmanship handshake. Garza smacks Rush in the face and walks off towards the backstage area. Rush can be heard saying, “Oh, it’s on now…” as he smiles, rubbing his jaw as we go to commercial.

The video package is shown following the storyline of Danny Birch who will be joining the Cruiserweight Division on 205 Live as a singles competitor. Aiden English and Tom Phillips discuss the details of the NXT Invasion during the past few weeks.

Lio Rush comes out into the arena as his music sounds. Rush climbs to the second turnbuckle, signaling to his championship belt which is secured around his waist. Raul Mendoza out next with a lot of energy as he jumps up onto the side of the ring, climbing through the ropes and entering the ring. The referee signals as the bell rings and the match begins.

Mendoza with a boot to the face of Rush who ends up on the outside of the ring, Mendoza flies through the ropes onto Rush. Mendoza hits a Flipping Senton before both men make their way back into the ring. Neck Breaker followed by a Springboard Moonsault off the bottom rope onto Rush by Mendoza. Mendoza with a loud backhand chop to the chest of Rush who is stuck in the corner against the turnbuckle. Rush goes for a kick, Mendoza counters grabbing his foot, Rush flips over kicking with his other leg. Mendoza attempts a pin, Rush gets his arm up.

Mendoza stretching Rush into very awkward positions with the Surfboard Stretch followed by a submission attempt. The crowd chanting, “Lio, Lio!”. Back and forth between the two men, Rush with a pin attempt to no avail. Rush with a boot to the face of Mendoza. Both men get back to their feet. Rush shoves Mendoza into the corner. Rush gets a Clothesline on Mendoza. Mendoza counters with a Back Elbow. Rush takes Mendoza down with a Spear though the ropes onto Mendoza. The referee counting, Rush throws Mendoza back into the ring at 4.

Rush gets the Springboard DDT on Mendoza and attempts the pin, Mendoza kicks out at two. Mendoza counters with a big move of his own and a pin attempt, Rush kicks out. Mendoza get to the top rope and Rush is able to escape. Mendoza with a big kick to the back of the neck of Rush. Rush slams Mendoza face first with a Spinning Unprettier followed by the three count pin for the win.

Lio Rush is seen walking back up the ramp, holding his championship belt high above his head as Aiden English and Tom Phillips reiterate this was the first 205 Live taping in the NXT Arena as the show ends and the arena fades to black. That’s it folks!