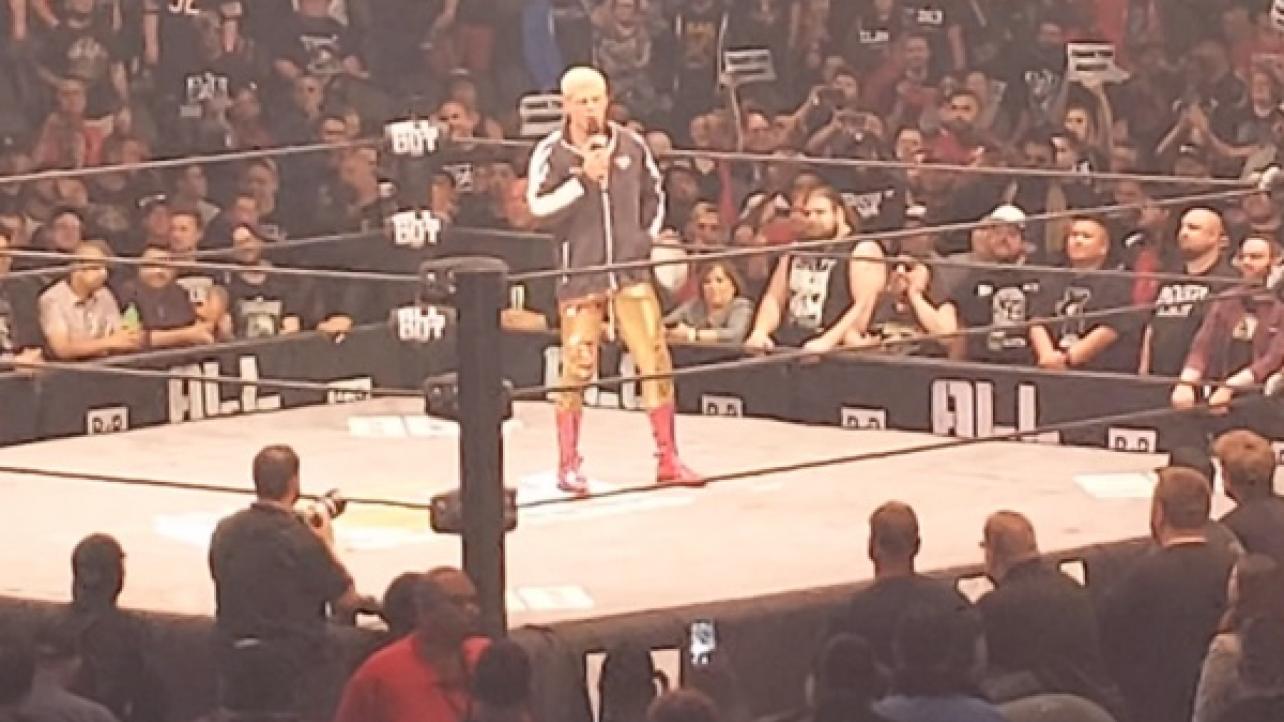 AEW All Out Off-Air News: What You DIDN’T See After The PPV Ended Last Night (Video)

If you thought what you saw during the AEW All Out pay-per-view was cool, wait until you see what happened when the cameras stopped rolling.

After Saturday night’s AEW All Out 2019 event at Sears Centre Arena in Hoffman Estates, Illinois wrapped up, AEW Executive Vice President (EVP) Cody came back down to the ring to cut a promo.

Cody, who defeated Shawn Spears during the PPV thanks to an assist from WWE Hall Of Famer and former “Enforcer” of the Four Horsemen, Arn Anderson, thanked the fans inside the Sears Centre Arena before telling a quick story about Adam “Hangman” Page.

As seen during the show, Page came up short in the main event, losing to the first-ever AEW World Champion Chris Jericho in an excellent match.

The AEW EVP would tell the fans a brief story about “Hangman” Page earning his well-earned reputation.

“I’ll tell ya a quick story,” Cody told the fans in attendance after the PPV. “I was in Japan, and Kevin Kelly said to me, ‘That’s really good what you’re doing with that guy, taking him under your wing.'”

Cody continued, “He was talking about ‘Hangman’ Adam Page. I looked a Kevin Kelly and said, ‘I’m not doing anything. That guy is the best wrestler in The Elite.'”

From there, Cody asked AEW President Tony Khan to come down to the ring.

Khan came out and cut a promo as well, announcing the start of a new annual tradition for All Elite Wrestling. Khan announced that every Labor Day Weekend the company will promote an AEW All Out PPV in the Chicago, Illinois market.

Additionally, the AEW boss man announced that the promotion will be returning to the Sears Centre Arena in Hoffman Estates, Illinois again on Thanksgiving Eve, Wednesday, November 27th for an episode of AEW On TNT. He mentioned that he would also like to make it a tradition to return to the venue every Thanksgiving Eve as he is originally from Illinois and his family still spends Thanksgiving there every year.

Check out exclusive video of the off-air happenings that took place after the AEW All Out PPV went off the air on Saturday night below.

AEW All Out Off-Air News: What You DIDN’T See After The PPV Ended Last Night (Video)