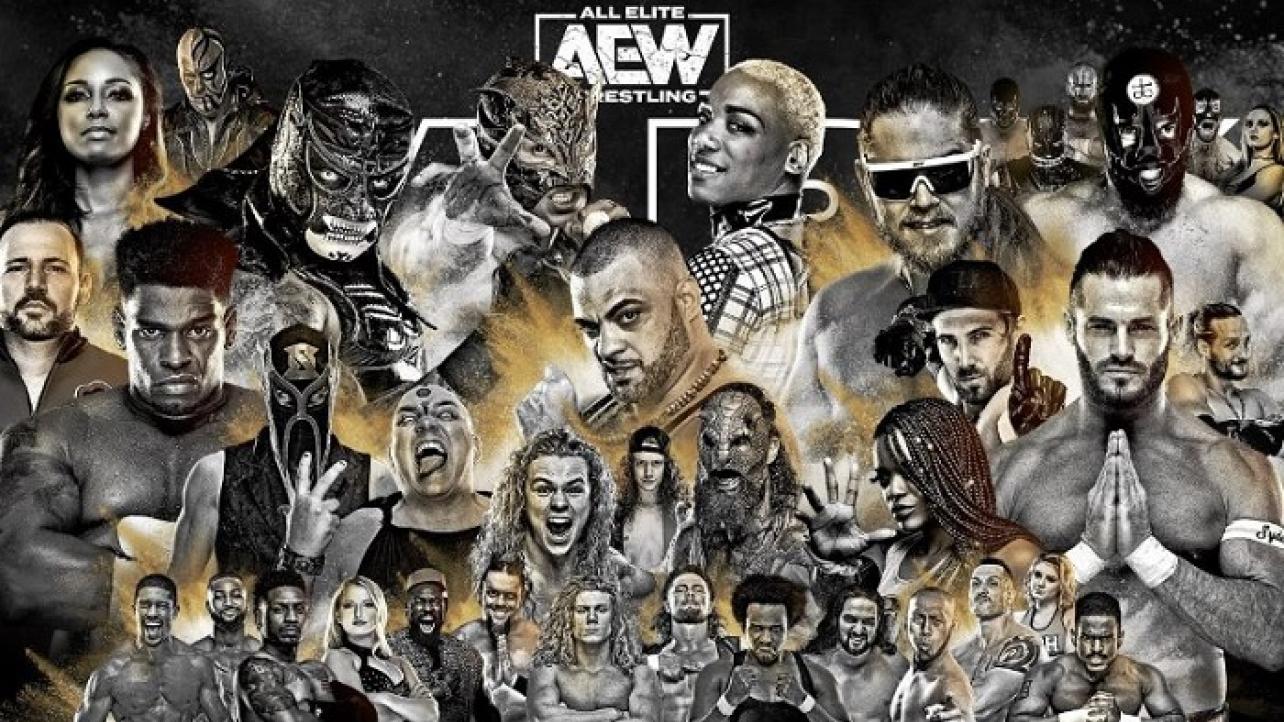 The Lucha Bros — Rey Fenix and Pentagon JR. — defeated the team of Joey Janela and Sonny Kiss in tag-team action in the main event of this week’s edition of AEW DARK.

The Tuesday, October 6, 2020 episode of the weekly All Elite Wrestling digital series also saw Eddie Kingston pick up a win in singles action, Matt Sydal scored a “W” over Michael Nakazawa and Brandi Rhodes picked-up a win in the opener of the show, which also saw Jurassic Express, Will Hobbs, Chaos Project, Big Swole, members of The Dark Order and more in other matches on the card.

Featured below are complete AEW DARK results from the Daily’s Place amphitheater in Jacksonville, FL. from Tuesday, October 6, 2020. The following report comes courtesy of @ParkerJKlyn and F4WOnline.com.

It looks like Ricky Starks is now a regular member of the Dark commentary desk as this marked his fourth appearance at the desk, although he did leave about halfway through. He joined regulars Excalibur and Taz.

This was pretty rough. It was very back-and-forth for the most part and not as much of a squash as you might expect. Brandi used lots of Dustin’s signature offense including his bulldog and the dropdown right hand. Brandi got the win with what was ostensibly a knee strike, but it came nowhere near landing like it should have.

Post-match, Anna Jay attacked Brandi, but Red Velvet ran out to make the save — the inverse of what happened last week.

This was Watts’ debut. He’s really tall, easily Luchasaurus’s height, and most recently made a national appearance on a UWN Primetime show. This was clearly meant to be a showcase for him as he got tons of offense in on one of AEW’s most established teams.

Jungle Boy and Luchasaurus dominated at the bell. The dinosaur no sold Rosas’ strikes as Jungle Boy hit an assisted senton for a quick near fall. Watts took advantage with a fallaway slam, but after an inside cradle, Jungle Boy escaped for the hot tag.

Watts tagged in and hit a sit out chokeslam for two. Rosas tagged in, but Luchasaurus hit the Tail Whip, Jungle Boy hit a dive, and Jurassic Express hit their assisted cutter for the win.

Luther has been a focal point of Wednesday’s Chris Jericho 30th anniversary celebration as he and Serpentico will face Jericho and Jake Hager. Johnson had an excellent match against Ben Carter on Dark a couple weeks ago.

Johnson and Bowens isolated Serpentico early on, but a short thrust kick allowed Chaos Project to take advantage. Johnson attempted a comeback after a sunset flip, but a clothesline from Luther cut him off. Chaos Project displayed some of their unique offense which frequently involves Luther literally using Serpentico as a weapon.

Johnson eventually escaped for the hot tag. Bowens hit clotheslines and kicks as well as a floatover DDT. Luther sent Johnson outside and Chaos Project overwhelmed with their numbers advantage, hitting a doomsday meteora for three to remain undefeated as a team.

Hobbs hit power moves early on, including multiple suplex variations. RYZIN attempted to land strikes and a clothesline, but Hobbs mostly no sold them and leveled RYZIN with a shoulder tackle. He caught a RYZIN crossbody and hit a powerslam, followed by the Last Will and Testament (a basic spinebuster) for the squash win.

– Eddie Kingston cut an excellent yet simple promo. He called out Janela and Kiss, saying they were talented but that they don’t live up to their potential by treating everything like a joke. He finished by saying the Lucha Bros don’t put up with that bullsh*t.

This was pretty good as it got plenty of time and wasn’t one sided at all. AEW can’t seem to decide whether they want to refer to Dark Order members by their names or their numbers. This week, he was simply “John Silver” with no mention of the number 4. He also wrestled without a mask.

Silver attempted a dive early, but Marshall caught him and turned it into a suplex. Uno grabbed Marshall’s leg with the official distracted, allowing Silver to take advantage. Silver drove Marshall into the staging area and the barricades.

Back inside, a corner lariat from Silver got two. Marshall attempted a comeback, but Silver turned it into a crossface before Marshall reached the ropes. Both men fought up top until Marshall hit a superplex for the comeback.

Marshall hit an inverted atomic drop, a scoop slam, and a diving uppercut. Uno distracted Marshall as Silver attempted a clothesline, but Marshall turned it into a tilt-a-whirl backbreaker. Silver hit an enzuigiri and a backcracker for a near fall.

Uno distracted the official yet again, but Rhodes evened the odds. Alan Angels and Preston Vance, both of whom were masked, ran in and interfered but both were foiled by Marshall. However, the distraction was enough for Silver to hit a rolling elbow and an inverted F5 for the upset win.

Bononi, a former WWE NXT trainee, debuted on Dark last week. Pillman and Garrison had never won as a team before.

Ali and Bononi got the heat after Bononi hit a big spinebuster. They took turns beating down Pillman with frequent tags. Pillman escaped out the back of a powerslam attempt and reached Garrison for the hot tag.

Garrison dispatched both of his opponents with strikes, finishing the sequence by essentially lawn darting Ali into Bononi for a spear. He and Pillman then hit a springboard clothesline powerbomb combination for their first AEW victory.

Swole is the no. 2-ranked wrestler in AEW’s women’s division. They talked trash at the bell before trading strikes. Swole fought out of a suplex and hit one of her own, followed by a series of running strikes. Moore sent her to the apron, but Swole hit a slingshot cutter and Dirty Dancing for the quick win.

– Matt Sydal talked about his All Out battle royal appearance, and how he slipped on the ropes and “almost died.” On Being The Elite, it was established that it was Michael Nakazawa’s fault due to something dealing with his body oil. Sydal’s not just trying to win the upcoming match, but is trying to end Nakazawa’s career.

This was Sydal’s Dark debut. He immediately leveled Nakazawa with kicks and went for the shooting star press, but Nakazawa had oiled the ropes again. Sydal went to wipe them off, but Nakazawa sprayed oil in his eyes and hit an Olympic slam for two.

This was a squash showcase for Kingston. He hit loud chops at the start, but M’Badu reversed a whip and nailed a huge corner splash and a powerslam for two. Kingston hit the Kitchen Sink and a spinning backfist for what would have been the win, but he picked M’Badu up before the three count. Kingston then locked on a kimura, forcing M’Badu to tap out.

Post-match, Kingston grabbed a mic and said that the kimura was a message to Jon Moxley. He mentioned Moxley is wrestling on Josh Barnett’s Bloodsport this weekend. He wants another shot at Moxley, and when that happens, he will lock on the kimura and make him scream “I quit.” This was an even better promo than the pre-recorded one he cut earlier.

– Janela and Kiss cut a promo backstage. Janela said that he embodies “no fear” just as much as the Lucha Bros and they want a spot on the AEW tag team rankings.

Angelico and Jack Evans have a tag title shot on Dynamite this week and the goal here was putting over Angelico’s unique Mexican llave submission style.

Angelico took Dean down with a kick to his hamstring and locked on an inverted figure four. Dean reached the ropes, but Angelico applied another unorthodox hold, but the referee forced a break.

Dean dropped Angelico with a forearm and clotheslines, concluding the sequence with a German suplex. He went for an underhook suplex, but Angelico escaped with kicks, locking on another inverted figure four for the submission victory.

This was far and away the best match on the show. Janela and Kiss hit stereo suicide dives before the bell. Fenix escaped and hit a tope con hilo on everyone. Back inside, the bell rang and El Zero hit a diving dropkick to Janela’s rear end. Janela fought his way out and reached Kiss, who took control with a springboard dropkick.

Lucha Bros hit their cazadora-assisted splash for the heat on Janela. El Zero beat him down with kicks and chops. Eventually, Janela escaped to Kiss for the hot tag.

Kiss hit a backflip dropkick and an exploder suplex followed by a corner dropkick. He hit a 450 splash, but Fenix broke up the pin. We got the parade of moves, concluding with Kiss hitting a lariat on El Zero.

Janela tagged in, but ran straight into a Fenix cutter. Penta superkicked both of his opponents, and the Lucha Bros hit their foot stomp/package piledriver combo for three.