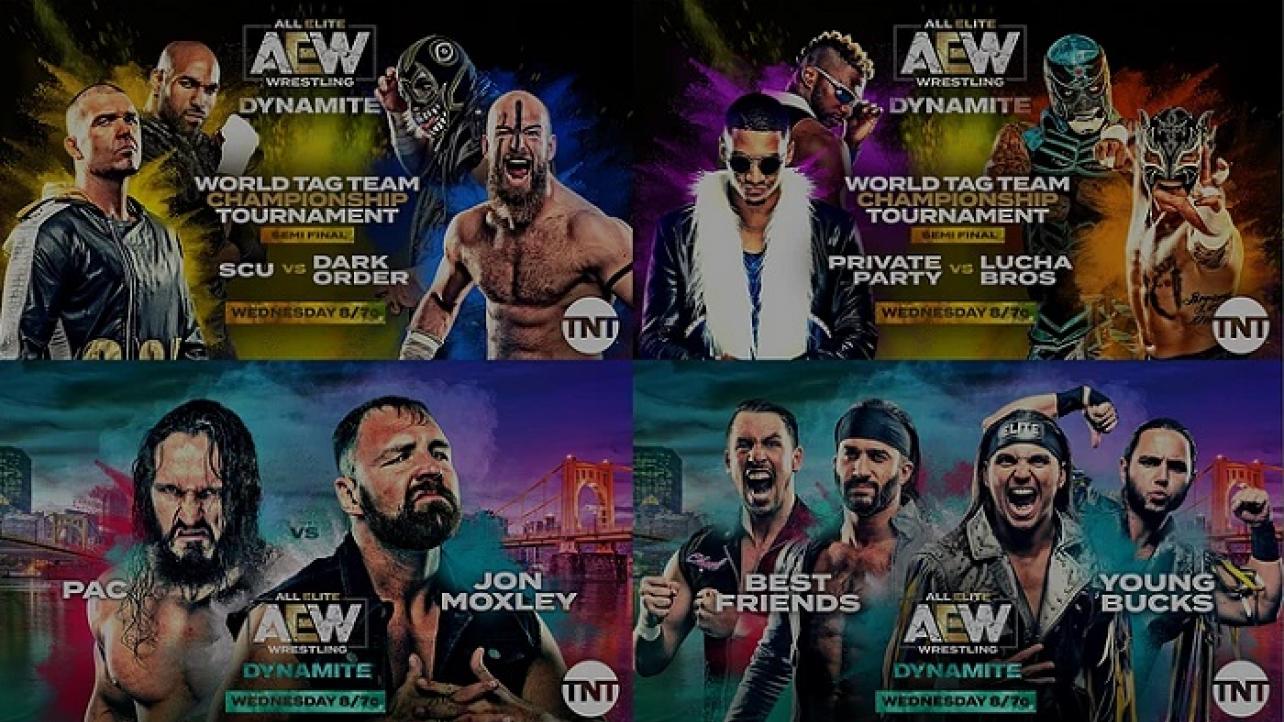 The Wednesday Night Wars continue with All Elite Wrestling returning with this week’s episode of AEW Dynamite live from the Petersen Events Center in Pittsburgh, Pennsylvania.

The Steel City awaits for All Elite Wrestling this Wednesday night on TNT! AEW comes to the Peterson Events Center, located on the campus of the University of Pittsburgh, and fans will get to see the Semi-Finals of the World Tag Team Title Tournament go down, as well as a first-time meeting between two titanic forces! Plus a top-shelf tag team clash, a homecoming for Dr. Britt Baker, D.M.D, and more for “AEW Dark”!

The tag team tournament rolls on as Private Party comes into Pittsburgh riding an upset victory over The Young Bucks in Boston, while the Lucha Bros advanced over the impromptu duo of Jungle Boy and Marko Stunt after Luchasaurus suffered an injury that forced him onto the sidelines in Philadelphia. That young duo took it to the current AAA Tag Team Champions in a fashion that shocked many fans around the world, but the brothers took the W and moved on to this battle. With only one more match between these four men and the chance to become the FIRST champions, you can rest assured that nothing will be left on the table, and that all four men will bring everything they’ve got as they work to advance to the championship match in West Virginia.

Yet the simple wins and losses aren’t the only story here, there is also what Penta and Fenix did earlier in the night in Philly, prior to the other Quarter-Final match. They demonstrated the willingness to do absolutely anything to get a leg-up on their competitors…

Injuries are the worst. They’re like a tunnel where you don’t know the length, you don’t know when you’ll see daylight again. But I didn’t come this far just to fade away. Especially since I have unfinished business to attend to.
Thanks for the well wishes, everyone.
SCU…soon pic.twitter.com/JlWlCoqn9x

…that leg-up came at the expense of S.C.U’s Christopher Daniels as Los Luchas attacked S.C.U prior to their match with Best Friends in Philadelphia. The end results saw Daniels carried out on a backboard, while Scorpio Sky stepped-up to the plate, and helped secure a victory of Chuck Taylor and Trent to advance to this bout right here.

As for The Dark Order, they earned themselves a bye into this semi-final match after defeating The Best Friends back in September at “All Out” in Chicago. And although they competed (and were victorious mind you) on the “AEW Dark” from Boston, this will mark the in-ring debut on TNT for The Dark Order, and what bigger way to make a statement than by defeating S.C.U in front of a worldwide audience.

S.C.U is looking to advance while praying Los Luchas advance as well, so Frankie & Scorpio can get their opportunity for revenge. Their focus could be split between those championships, their desire for vengeance, and the health of their third man, or all those factors could transform into one streamlined motivation towards claiming the tag titles. As for Evil Uno and Grayson, well it seems likely they would not care who they must face en route to their end game, and who they must beat to become the very first AEW World Tag Team Champions on Halloween Eve in West Virginia. By the end of the night, the face of the finals will be set…

Going into Philadelphia there was certainly a question if PAC and Moxley could co-exist as partners despite their mutual disdain for Kenny Omega and “Hangman” Adam Page. By the end of the bout, after Moxley and Omega attempted to introduce weapon’s into a straight-up tag match, it became clear they could not. PAC entered the ring, took the barbwire wrapped weapon from Moxley’s hands, and tossed it outside of ring. In that moment the differences between PAC and Mox could not have been clearer; for PAC it is about the wins and losses, for Moxley it is about the destruction and violence. A bloody PAC was laid out with a Paradigm Shift DDT from Moxley, and left to the mercies of Omega and Page, thus suffering his first loss in AEW record books.

Now these two forces will collide in Pittsburgh for the very first time, and the result is sure to be a violent explosion. This one is also certainly of interest to the newly crowned AAA Mega Champion Kenny Omega as he is set to face Moxley at “Full Gear” on November 9th in Baltimore…

Two of the top tag teams in the wrestling world now find themselves on the outs of the AEW World Tag Team Title Tournament; they have to sit in front of the monitors and watch while four other teams fight to claim titles that could have been theirs. So it is with this in mind that The Young Bucks and The Best Friends collide in this tag team contest, and look to get their careers back on track. It’s not the first time these four men have danced, as far back as 2014 they did battle over the PWG Tag Team Titles, but it may be the most important of the handful of matches between the two duos. With no chance to become the champions after their eliminations, it is now time for these teams to position themselves as deserving challengers for whomever walks out of WV with the belts next week. Will it be the brothers Jackson or Chuck & Trent who begin that journey on the winning track?

It’s a homecoming for Britt Baker as she returns to the Pitt campus where she earned her degree, the area where who she is as a person, and as a wrestler, was forged, and it is not the homecoming she anticipated. Last week, when Baker faced off with Riho for the AEW Women’s World Championship, she no doubt expected to walk out as the new champion, not because it was her right or because she was entitled to it, but because in her heart Britt believed she had worked harder, and prepared herself more than her opponent. She was wrong…

Riho retained her championship, and now Dr. Baker comes home to Brittsburgh without the championship in tow, but (much like the teams in the match above) with an opportunity to regain her composure and demonstrate she deserves to stay in that title picture. With her hometown in her corner, Dr. Britt Baker will be in action this Wednesday night to prove she is one of the best women on the AEW roster!

Also you know, with the Bubbly Bath that capped the night off in Philadelphia, AEW World Champion Chris Jericho and his Inner Circle will make their presence felt in one fashion or another. And with the next AEW World Title match between Jericho and Cody just over two weeks away, things are only going to heat up between the champion and challenger! Make sure you don’t miss a moment of AEW “DYNAMITE” this Wednesday night on TNT kicking off at 8pm EST/7pm CST!!

And #AllEliteWrestling STACKS the deck for TONIGHT’S #AEWDynamite show