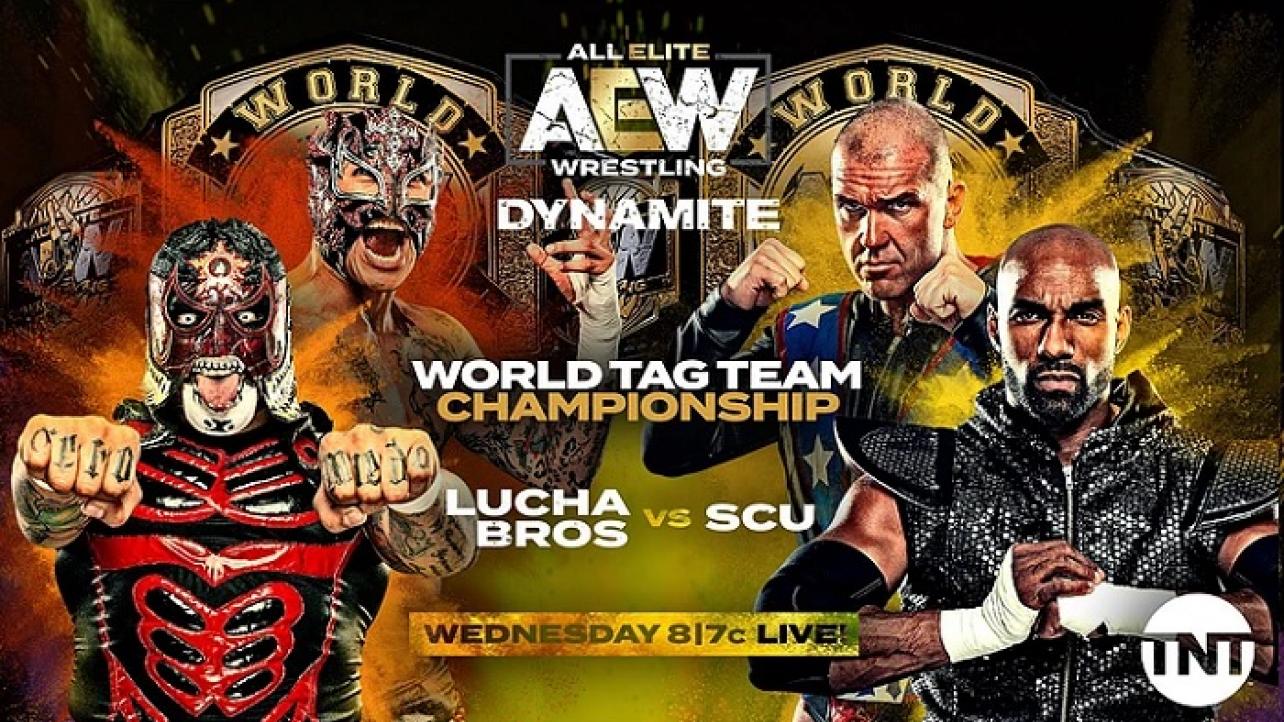 All Elite Wrestling (AEW) returns to TNT on Wednesday evening with their latest weekly episode of AEW Dynamite, which emanates from the Charleston Coliseum in Charleston, West Virginia.

AllEliteWrestling.com released the following preview for this week’s show:

This Wednesday night, on the eve of Halloween, All Elite Wrestling “Dynamite” makes its West Virginia debut at the Charleston Coliseum LIVE on TNT!! We go live at 8pm EST/7pm CST and what a night of action in store for the fans. The finals of the World Tag Team Title Tournament, the official contract signing for the AEW World Title Match at “Full Gear” on 11/9, Six Man Tag action, and the legendary Rock ‘n’ Roll Express in the house!!! Oh yes, and do not forget Rick and Morty…

It has been building for months now, since “Fyter Fest” when the first qualifying bout for the tournament took place between SCU, Private Party, and Best Friends. From there we have seen 7 teams ultimately make up the brackets for this battle to become the very first AEW World Tag Team Champions. The Young Bucks, Private Party, Jurassic Express, Best Friends, The Dark Order, and the two teams competing in the finals, Lucha Bros and SCU, have fought to get here to West Virginia, and now it finally goes down. Penta and Fenix defeated Jurassic Express and Private Party to get to this point, while the SCU duo put down Best Friends and Dark Order to arrive at the finals. But the deeper story is just what The Lucha Bros did to nearly end the championship dreams of SCU…

Prior to the start of the tournament, SCU was unsure which 2 members would represent the unit in the tournament but ultimately, in deference to their experience as a team, Scorpio Sky recused himself for Christopher Daniels and Kazarian to pursue the titles. The Lucha Bros nearly put an end to that dream in Philadelphia as they attacked SCU prior to their 1st round match-up, looking for a leg-up on the competition, and putting Daniels on the shelf with an injury. This forced Scorpio Sky to step-up and team with Kazarian that night, and the impromptu SCU duo persevered and captured the victory that night, The Lucha Bros only served to add fuel to the fires motivating So Cal Uncensored in this tournament.

So now with the personal vendetta between these two teams now piled on top of the opportunity to become the first AEW World Tag Team Champions, this tag team contest is going to tear the roof off the building. For Pentagon Jr and Fenix, this one is about adding the AEW titles to their already impressive championship resume, everything else is just a means to an end, but for Kazarian and Sky it was made very, very personal. Who will make history in Charleston this Wednesday night?

As an added bonus, in honor of their status as one of the absolute greatest tag teams in the history of professional wrestling and handpicked by The Young Bucks for the occasion, The Rock ‘n’ Roll Express, Ricky Morton and Robert Gibson, will be in the house to present the winners of the tournament with the championship titles!!

On November 9th, AEW returns to pay-per-view on B/R Live with “Full Gear” and on that night AEW World Champion Chris Jericho will defend his title against Cody in what has become one of the most heat rivalries in wrestling. From verbal assaults on Cody and his family, to the physical assaults handed down to The Elite and Dustin Rhodes by The Inner Circle, fans have seen Chris Jericho do his best to get into the psyche of Cody prior to the World Title challenge. On the other side of the coin, Cody has shown no signs of fear and no intention of backing down from Jericho or his crew. As a matter of fact, in Pittsburgh this past Wednesday, Cody demonstrated that he too has support in the face of Jericho’s Inner Circle numbers game, and that nothing, not even a locked door and panes of glass, will keep Cody from getting his hands on the World Champion.

Wednesday night it will become official as the two men meet in the center of the ring to put pen-to-paper, sign their names on the dotted lines, and set in stone the AEW World Championship match for “Full Gear” in Baltimore. Fans know Jericho will likely be flanked by the members of his Inner Circle, and Cody clearly has support when needed. This has all the elements of a combustible situation, the question is if it will blow up in West Virginia like it did in Pittsburgh or if it can be contained until AEW gets to Charm City?

You heard it from the mouth of Kip Sabian himself what his intentions are for this match, a chance to finally appear on “Dynamite” alongside Jack Evans and Angelico, and to do so in a bout with the biggest trio they could possibly face in The Elite. Evans and Angelico found themselves on the outs of the Tag Team Title Tournament, thanks to fan voting mind you, and now simply look to establish themselves as another force in the division worthy of challenging whomever claims the titles tonight.

The Elite trio of the Jacksons and Omega tasted defeat in their lone trios bout on “Dynamite” opposite The Inner Circle of AEW World Champion Chris Jericho, Santana, and Ortiz, but, in their own ways, all three men have begun to rebound from tough losses. The Young Bucks defeated Best Friends a week ago and have accepted the challenge to fight Santana & Ortiz at “Full Gear”, while Kenny Omega has strung together two victories over Joey Janela, and a tag title win over PAC and Moxley in recent weeks.

Will the momentum of The Elite roll on as we head towards Baltimore on November 9th or will the nascent trio of The Hybrid 2 and Kip Sabian snag the upset victory live on their “Dynamite” debuts?

Two young and hungry athletes, one man looking to get back on the championship track and another seeking to establish his cred within The Inner Circle; Adam Page and Sammy Guevara are no strangers to one another. In Boston a few weeks back, the pairing of Guevara and World Champion Chris Jericho defeated Page and Dustin Rhodes in a tag team bout albeit with Rhodes tasting the Judas Effect for the loss. Now Page has a chance to redeem that defeat and stand up for his Elite brethren in this bout, but as fans keep seeing (and can see in the video above), the connection between Page and the rest of The Elite appears to be strained at best. On the other hand, Sammy and The Inner Circle seem as tight as possible, especially looking how the group rallied behind Jake Hager at his recent Bellator MMA fight. Will the rest of Guevara’s group play into this battle, or will he go it alone to continue prove to the world that he deserve to be in the “best wrestler in the world” conversation?

Prior to the start of the television broadcast, AEW will hold a special Meet & Greet open to all our fans with tickets for the event! The meet and greet tickets will go on-sale at 5:30pm, and the signing will start at 6:30pm when the doors open for the night! Again, you must have an event ticket to participate in this special opportunity to meet The Jurassic Express (Marko Stunt, Jungle Boy, & Luchasaurus), SCU of Scorpio Sky and Frankie Kazarian, The Young Bucks, and Allie!

Rick and Morty In The House!!

In celebration of new episodes of “Rick And Morty” premiering on November 10th on Adult Swim, the duo is coming to West Virginia this Wednesday night!! Fans in attendance will have a chance to snag special Rick and Morty masks to commemorate the occasion, and just in time for Halloween!

In addition to all that excitment, fans will also see Jon Moxley in action on the heels of last week’s unnecessary assault on Senior Official Paul Turner. Can he control himself, or will Mox risk suspension with his violent actions? It is Devil’s Night after all…

Plus the trio of The Best Friends, Chuck Taylor and Trent, with Orange Cassidy will be in six-man tag team competition!

The first tag team champs will be crowned, the “Full Gear” contract will be signed, and a whole lot more in store for you from All Elite Wrestling! Grab your tickets at AEWTix.com, or tune in live on TNT!

Make sure to join us here at eWrestling.com on Wednesday, Oct. 30th for LIVE AEW Dynamite Results coverage from Charleston, W.V.!