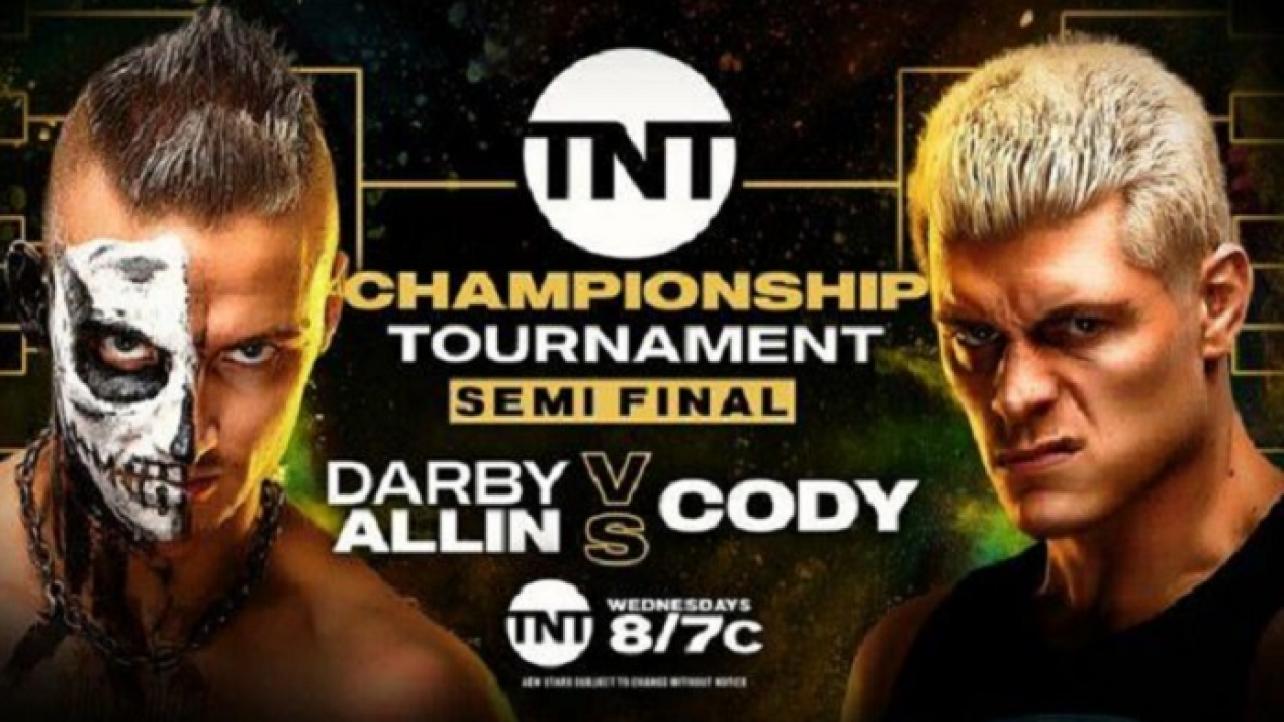 All Elite Wrestling returns with this week’s episode of AEW Dynamite this evening, featuring the semi-finals of the ongoing TNT Championship Tournament, the latest thoughts from AEW World Champion Jon Moxley and more.

Last week, fans witnessed both Dustin Rhodes and Darby Allin advance in the TNT Championship tournament with victories over Kip Sabian and Sammy Guevara respectively. In addition, Kenny Omega, Mr. Brodie Lee, Wardlow, and Orange Cassidy all also came up on the winning end of their respective matches. Unfortunately for the latter of that quartet, it didn’t end up as a celebration thanks to Kip Sabian, Penelope Ford, and Jimmy Havoc, but that’s a story for a later.

We also got an update on the status of MJF, heard from The Bubbly Bunch, we got a special look at Scorpio Sky, and Matt Hardy checked in from The Hardy Compound.

This week, with two Semi-Final bouts on tap, we will find out just who will collide to crown the first TNT Championship at “Double or Nothing” on May 23rd. In addition, we will have a fight on our hands between The Best Friends and Sabian/Havoc, plus Marko Stunt facing a mammoth challenge in Mr. Brodie Lee, and we will hear from the AEW World Champion Jon Moxley for the first time since his Empty Arena fight with Jake Hager. It all goes down at 8pm EST/7pm CST on TNT!

As recapped in the “Road To…” video embedded above, Cody and Darby Allin are quite familiar with one another. Be it the time limit draw at “Fyter Fest” that heralded Allin’s arrival in AEW in dramatic fashion, the tag team fight against The Butcher & The Blade last December, or the “Dynamite” rematch on New Year’s Day that Cody came out of victorious, these two individuals have been allies and opponents, but never enemies.

And yet on April 1st when Cody and Darby last occupied the ring together, tag teaming against Sammy Guevara and Shawn Spears in a match that saw Darby eat the losing pin, they way in which they parted was a far cry from the earlier instances. Those previous times were respectful, if not frustrating for Darby, but respectful nonetheless. Yet on April Fool’s Day, as you can see in the video below, that was not the case:

Rather, on their last encounter, it can be surmised that Darby let Cody know he was done with the respect game. It was a moment of frustration boiling over, of Darby being done with the “It’s okay KID” treatment, and that forearm across the jaw pretty much screamed if they met in the tournament, Darby was coming for the proverbial kill.

See while Cody has glowingly praised Darby in the past on commentary and in interviews, he has also referred to him as (paraphrasing here) “a freshman on the Varsity squad”, which could easily be taken as a backhanded compliment. Sort of a “you’re good, but not good enough yet” statement that slides Darby into line behind Cody.

Will it be Darby’s night for that next evolution in his career? Or will it be Cody who moves on to either a rematch with his brother, or to face the monster that has been pursuing him for weeks?

One week ago, in a moment of self-doubt, Dustin Rhodes declared that if he could not beat Kip Sabian in their Quarter-Final bout, he would walk away from his 30-year career, and hang up the boots. Thankfully, with Brandi Rhodes there to counterbalance Penelope Ford’s attempt to sway the match, Dustin picked up the victory and advanced to the Semi-Finals of the TNT Championship tournament. Dustin proved to himself he still had that fire inside, that the desire to become a champion in AEW burned strong. Unfortunately for him, Dustin now must contend with a near 7-Foot tall monster if he hopes to get to the Finals at “Double or Nothing”.

See Lance Archer does not care about Dustin’s self-doubt, does not care about the thirty year career, just does not care about anything other than the wanton destruction of anyone in his path. And yes that is meant quite literally, as evidenced by his violent actions toward anyone who enters his field of vision while Archer marches towards the ring for a match. It is in the hell he creates that Archer finds his heaven, and it is the decimation of Cody that serves as his Holy Grail. But to get there, “The Murderhawk” must first bring Cody’s big brother to heel, and it is certainly a rational belief that Archer will attempt to do that as painfully as possible. For Archer and The Snake, this Semi-Final pairing is as much about sending a message to “Caesar” through his brother as it is about advancing towards that championship match.

Dustin will not allow himself to simply be a message here, and he will not go down without a fight. As he said himself, Dustin has fought many a monster during his three decades inside the squared circle, but even they may pale in comparison to the unrestrained violence of Lance Archer. Still, as the saying goes, to get to heaven you’ve got to go through hell, and this is a hell Dustin Rhodes will willingly wade through to get to that TNT Championship match.

A week ago, in his very first “Dynamite” match, Orange Cassidy picked up a win over Jimmy Havoc, but certainly did not feel like the winner in the aftermath. As seen in the video above, as soon as that bell rang, Havoc and his running buddy Kip Sabian were on the attack, dropping OC on his head, and it was only the quick intervention of Trent and Chuckie T that prevented it from being much worse. Post-match words from the trio (well, two out of three) served as notice that this wasn’t an issue going away quietly:

By the close of “Dynamite” last week, it was set that The Best Friends would go into battle with Sabian and Havoc under these stipulations that are sure to create chaos! Plus, with Orange Cassidy and Penelope Ford no doubt around to support their side, we have all elements for one uncontrollable fiasco. And not to be forgotten in all this, The Best Friends are the third-ranked team in the standings, and a victory for Kip and Jimmy would certainly help garner them some attention as a team to go along with the attention each gets competing on their own.

Tune-in tonight to see this one unfold before your very eyes!

Last week Marko Stunt watched from ringside as Mr. Brodie Lee decimated yet another victim on “Dynamite”, and once more showed the world the same dominance as a wrestler that he exerts as “The Exalted One” of The Dark Order.

Yet Marko did not back down from the extremely intimidating presence of Lee as Mister Brodie made a beeline towards him following the victory. Marko, despite being at a tremendous size disadvantage stood his ground, while The Exalted One looked on him, almost amused.

Stunt has certainly proven time and again in AEW, and throughout his career, that he will not back down from any fight, no matter the odds or the disadvantage. Marko will take the fight to his opponent to the best of his ability, and it’s that “never say die” attitude that has earned him not only the love of the fans, but also the respect of his peers.

This week on “Dynamite”, Stunt will have to tap into every single iota of that attitude if he hopes to survive the onslaught of Mister Brodie. Where the attack of Archer that Marko faced weeks ago was unrestrained, the offense of Lee is calculating and controlled, each move thought about before it’s delivered with maximum effectiveness. All the quickness and agility, every move and strike and hold Marko has every learned will need to be at the ready if he hopes to avoid becoming another victim of The Exalted One.

When we last saw the AEW World Champion, it was after turning back the challenge of The Inner Circle’s Jake Hager in a No Holds Barred, Empty Arena Match. It not only marked the first successful title defense for Jon Moxley, but also completed a clean sweep of victories over the five members of The Inner Circle.

So what is on the mind of Mox as we head into this week’s edition of “Dynamite”? What is swirling around inside the brain of the champ after that victory, and what does he have to say about the future of the AEW World Title? As we understand it, he has a lot to say, and Moxley will let us all hear it all tonight when the AEW World Champion speaks!

At the end of the night tonight, we will all know the finals of the TNT Championship Tournament and know just what the AEW World Champion has stirring around in his brain. And it all begins at 8pm EST/7pm CST on TNT when “Dynamite” takes to the airwaves for another week of the most exciting professional wrestling available anywhere!

The gang at #AEW returns TONIGHT with this week’s episode of #AEWDynamite!