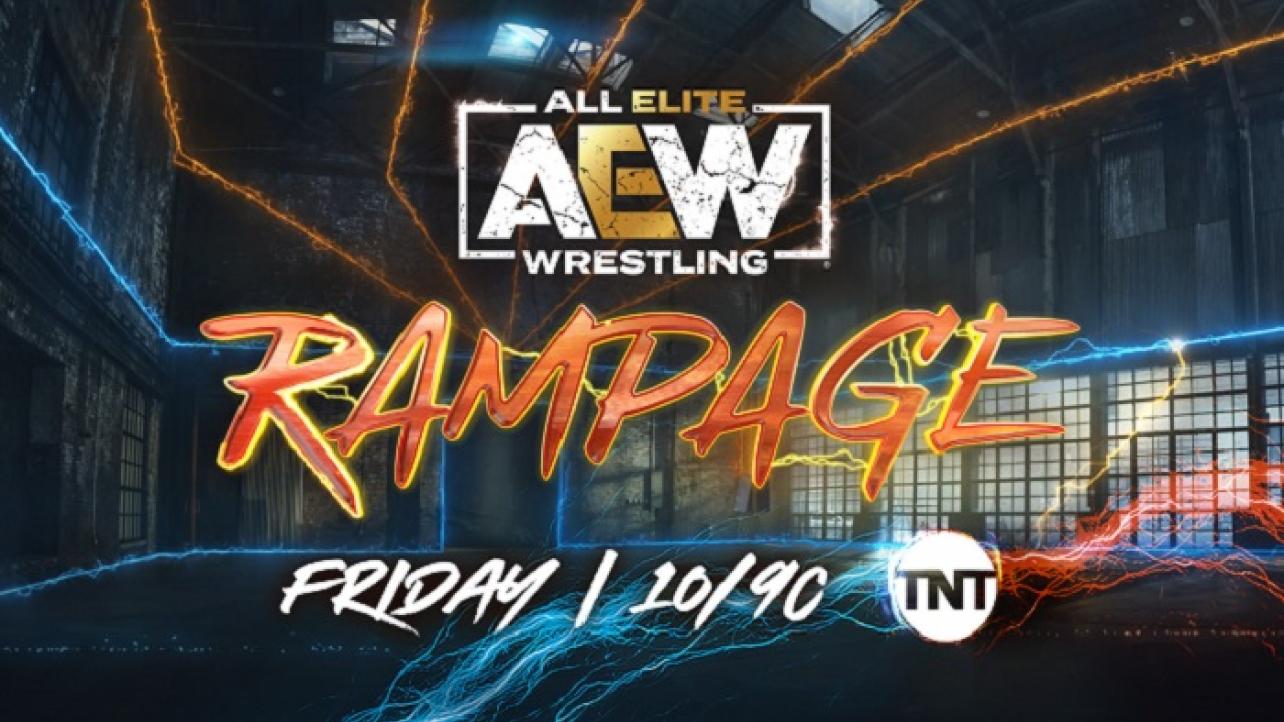 All Elite Wrestling returns to the Chartway Arena in Norfolk, Virginia this evening for the post-Full Gear edition of Rampage on TNT.

The usual signature video intro kicks off this week’s show and then we shoot inside the Chartway Arena in Norfolk, VA. as the commentators welcome us to the show.

We then hear the familiar sounds of Darby Allin’s theme music. The fan favorite makes his way out accompanied by “The Icon” Sting and the two make their way down to the ring.

After the two settle into the squared circle, the music dies down and then the theme for Billy Gunn hits as the leader of The Gunn Club makes his way down to the ring for tonight’s opening contest.

The bell sounds and we’re off-and-running with our first bout of the evening. We see these two go at it early on with back-and-forth offensive spurts, with neither man establishing any real control of the action.

Now we see Gunn start to pull ahead, as he shucks Darby out of the ring and out to the floor. The action resumes inside the ring and we see Gunn now very much in control of the contest. The fans break out in a loud “assh*le! assh*le!” chant.

Following a couple of big shots, Gunn throws Allin out to the ringside area again. He takes a hard landing on the floor and then Gunn follows out after him to deliver additional punishment. On that note, we head to a mid-match commercial break as Gunn continues to work over Allin on the floor.

As we return from the break, we see Gunn still working over Allin, with the action now back inside the ring. The fans chant “Darby! Darby!” to try and rally him back into the fight, but Gunn remains in the offensive driver’s seat.

The Gunn Club leader takes Darby up to the middle rope and goes for a big superplex, but Darby fights his way free and leaps off backwards, connecting with a Coffin Drop on Austin and Colten Gunn on the floor. Moments later he hits back-to-back Coffin Drops on Billy Gunn back inside the ring. He then goes for the cover and picks up the pin fall victory.

We shoot backstage to Tony Schiavone who is standing by with QT Marshall. Marshall mentions CM Punk and goes on to extend a challenge to “The Best in the World” for when AEW travels to his hometown of Chicago, Illinois. After this, we head to another commercial break.

Now we head back inside the Chartway Arena in Norfolk, VA., as it’s time for our second bout of the evening, which will be the latest match in the ongoing TBS Women’s Championship Tournament.

Jade Cargill and Red Velvet make their respective ring entrances and once inside the ring, they stare each other down and then the bell sounds to get this one off-and-running.

Early on we see Velvet and Cargill exchanging back-and-forth action, however it is the larger Cargill who ends up outpowering and beating down Velvet. She throws her out to the floor and then hoists her up for a chokeslam on the hard part of the ring apron. On that note, we head to a mid-match commercial break.

When we return from the break, we see Velvet start to shift the offensive momentum into her favor, as she begins dominating the action for the first time in the bout. It doesn’t last for long, however, as Cargill decks Velvet with a big boot to the face. She then locks her in a Jay-Day submission but Velvet rolls through for a pin attempt on a counter. Cargill kicks out at two.

Once the two get back to their feet, we see Velvet take Cargill down with a big spear. She tries following that up with her finisher but Cargill avoids it and ends up taking Velvet out for the victory to advance in the tourney.

We shoot backstage to Tony Schiavone, who is standing by with CM Punk. He asks for his reaction to the challenge issued by QT Marshall earlier in the show and Punk makes it clear that in his backyard and hometown of Chicago on the day before Thanksgiving, he’s gonna prove that Marshall truly is a turkey.

After the commentators run down the lineup for next week’s special Black Friday edition of Rampage, we shoot to Mark Henry, as it’s time for the weekly split-screen pre-main event interview hosted by “The World’s Strongest Man.”

Henry introduces the two teams involved in tonight’s main event and then The Super Kliq and Bobby Fish begin talking first. They mention that Jungle Boy thinks he’s a tough guy after decking him with a cheap shot recently.

Christian Cage and Jurassic Express make it clear that they’re ready for The Super Kliq and Bobby Fish. We then head to more commercials with our main event waiting on the other side of the break.

After we return inside the Chartway Arena in Norfolk, VA. following the commercial break, we hear the familiar sounds of Adam Cole’s theme music. The Super Kliq member makes his way out accompanied by “The Infamous” Bobby Fish.

The two head down to the ring for our tag-team main event of the evening. They settle into the ring and their music fades down. We then hear the equally familiar sounds of Jurassic Express’ entrance music, and out comes Jungle Boy and Luchasaurus.

Now we hear the bell sound and it’s time to get our main event of the evening off and running. Jungle Boy ends up on the wrong end of a one-sided beatdown as he ends up isolated in the ring as Cole and Fish take turns tagging in and out to keep a fresh guy on him at all times.

Jungle Boy gets close to making the tag but ends up not quite making it to his side of the ring. Instead, Fish and Cole double team him some more before we head to another commercial break.

As we settle back in from the break, we see Jungle Boy still desparately trying to make it to his corner to make the much-needed tag to Luchasaurus. Instead, Fish quickly makes it to Cole to get the tag, and Cole cuts Jungle Boy off before he can make it to his own corner of the ring.

Finally, we see Jungle Boy make it to his corner, and he makes the tag to the big masked man. Luchasaurus hits the ring like a man possessed, using his size-and-strength to dominate the action, beating down both Cole and Fish single-handedly. He then makes the tag to Jungle Boy.

Jungle Boy hits the ring and he and Luchasaurus hit a big double-team spot on Cole for a close near fall. Cole gets in position for the Panama Sunrise on Jungle Boy, however he doesn’t hit it. Instead, Jungle Boy beats Cole down and gets in a near fall situation, only for Fish to hit the ring to break up the pin attempt.

Fish ends up as the legal man with Jungle Boy. He stalks him from one corner of the ring before charging over to the other side to blast him with a big shot. He then uses the dragon cork-screw to yank Jungle Boy down to the mat the hard way by the leg. He waits for Jungle Boy to get up and then sprints at him, only for Jungle Boy to launch him with an overhead suplex.

As Jungle Boy starts to look to finish Fish off for the victory, we see The Young Bucks — Nick and Matt Jackson — make their way out through the entrance tunnel. They head down the ramp, but are ultimately stopped in their tracks when Luchasaurus comes after them. Christian Cage ends up running out with a steel chair and chasing them off. We then see Jungle Boy lock Fish in his snare trap submission finisher. Fish taps out.

My personal opinion: Tonight’s #AEWRampage main event is going to absolutely rule. I’m so excited about it. With all of the debates about match star ratings, we can debate about this later. @AEWonTNT Rampage TONIGHT is stacked with GREAT wrestling + some important announcements! https://t.co/KDg8wWlMFe pic.twitter.com/45K9Pdgivp

I think that TONIGHT’s Friday Night #AEWRampage is going to be one of the best 1 hour wrestling shows in recent memory, and if you happen to have 60 minutes to spare tonight @ 10pm ET/9pm CT, watch Rampage on TNT however you can, on your tv or a friend’s or a bar’s or your phone! pic.twitter.com/kxEvXZ5Nes