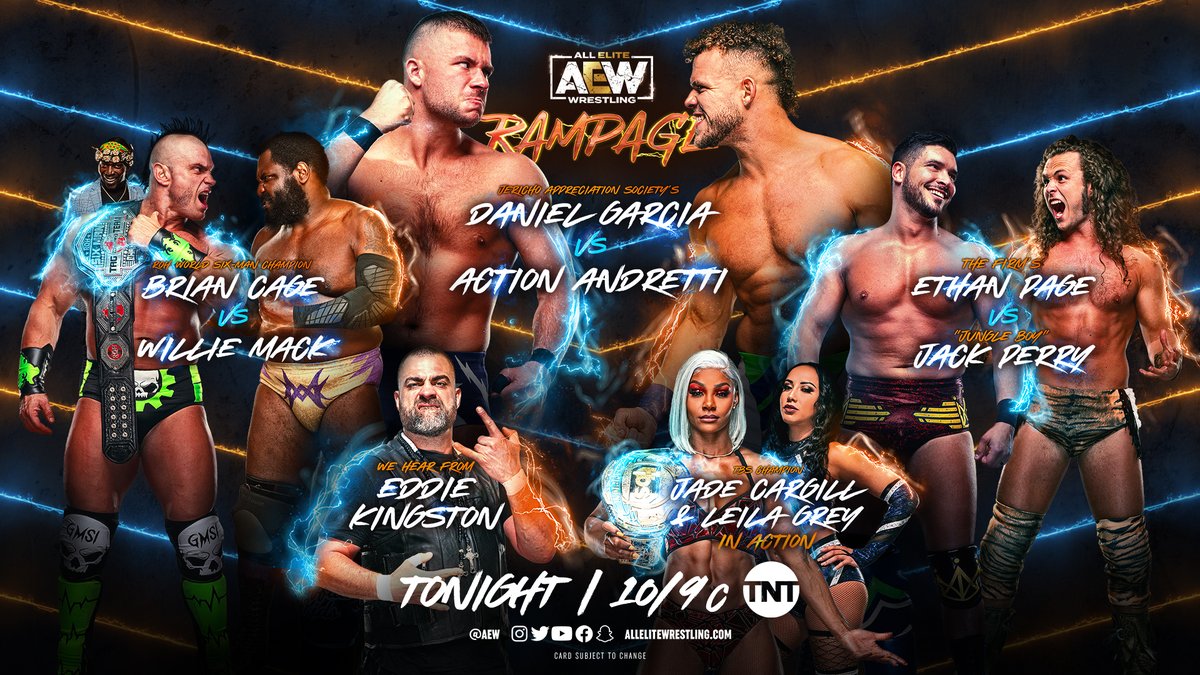 It’s Friday, and you know what that means …

All Elite Wrestling returns from the Save Mart Center in Fresno, California with the latest installment of AEW Rampage.

Featured below are complete AEW Rampage results from Friday, January 20, 2023. The following report was written by eWrestling.com reporter Matt Boone (@MattBoone0709) as the show aired live from 10-11pm EST. on TNT.

The “This is Rampage, baby!” theme and opening video plays and we shoot inside the Save Mart Center in Fresno, CA. where the commentators welcome us to this week’s show.

Jungle Boy’s theme hits as Jim Ross and Chris Jericho welcome us to the show on commentary. Jericho jokes that he hates when crowds sing along with theme songs. Already in the ring is Jungle Boy’s opponent, “All Ego” Ethan Page.

Page takes Jungle Boy off the top-rope and looks for his Ego’s Edge straight out of the gate, but Jungle Boy Jack Perry escapes and goes to work on him. Page heads out to the floor where Isiah Kassidy from Private Party is pulled in front of him as Perry splashes from the ring.

Ethan Page starts arguing with Matt Hardy at ringside as the commentators remind us that Page owns his and Private Party’s contracts. While they talk, Jungle Boy dives through the ropes and splashes onto “All Ego.”

Back in the ring, Jungle Boy hits a unique move off the ropes and a follow-up drop kick. We see Stokely Hathaway provide a distraction as the action spills out to the floor. This allows Page to take back over on offense. After he does, he pretends to celebrate with Matt Hardy, who looks miserable to be around Page.

Page slams Jungle Boy face-first on the hard part of the ring apron and then rolls him back inside the squared-circle. He follows in after him as the fans try and rally behind Jungle Boy. Page hits a back-breaker on him and then taunts the crowd.

The action spills out to the floor and then we cut to a mid-match commercial break. When we return we see some more back-and-forth action building to the finish, which sees Hook come out just in time to make a save and also to provide a distraction that allows Jungle Boy to roll-up Page, after pulling Page’s grip off Hardy’s ponytail through the ropes on the floor.

Once the match wraps up, we see Stokely Hathaway and Ethan Page grilling Matt Hardy for “costing” him the match. Page asks if Hardy wants to be his friend. He says Hardy is gonna make it up to him because he owes him. He challenges Jungle-Hook to a tag-team showdown against Page and Hardy. Stokely Hathaway tells Hardy that until then, he is on time out. After this, we head to another commercial break.

We return from the break to see Tony Schiavone in the ring with Ortiz. He asks him about his friend Eddie Kingston. Ortiz says he thought Kingston was his friend but a man who is willing to hit a woman with a steel chair is no friend of his. He tells Schiavone he appreciates his time but he shouldn’t be talking to him, he wants to talk directly to “The Mad King.”

With that said, Eddie Kingston’s theme hits and out he comes with a steel chair in hand. He gets in the ring and he and Ortiz go face-to-face and circle around. Kingston tells Schiavone to take a hike. He says they’ve been through their battles in the past but in their world, you don’t hit a woman. He asks if that’s how Kingston was raised.

Ortiz brings up Kingston bringing a chair. He says their mentor Homicide would say he’s a coward. A fake tough guy. As he continues talking, he is ambushed and struck by the chair from Kingston. Kingston walks off as Ortiz is left laying.

We shoot to a special message from TNT Champion Darby Allin. He talks about how he has beaten Malakai Black and Brody King, but he’s ready to prove to himself that he can beat every single member of The House of Black. He tells Buddy Matthews that he doesn’t have to issue the challenge to him. He tells him to show up at AEW Dynamite.

Now the IMPACT Wrestling veteran Willie Mack makes his way to the ring for his AEW Rampage debut. He goes one-on-one against “The Machine” Brian Cage next here on Rampage. He settles inside the ring and his music dies down.

Now the theme for “The Machine” plays and out comes Brian Cage accompanied by Prince Nana. The bell sounds and we’re off-and-running with this one. We see Mack faring well early on, but it is Cage who is controlling the action as we head into a mid-match commercial break.

When we return from the break, we see Cage still controlling the action with relative ease. Mack eventually starts fighting back and he hits a nice sky-high for a near fall. Cage takes back over again after this and after hitting a big spot, he does a super-lax-cover and because he got too arrogant, he couldn’t finish this one off.

Cage looks to hit another power bomb on Mack but Mack avoids it. Cage ends up hitting it anyways moments later and then follows up with a Drill-Claw for the pin fall victory.

After the match we shoot to the commentators, who mention how great the Jacksonville Jaguars are doing. Jim Ross shows off his Jaguars sweater and Chris Jericho mentions plans to go to the next game.

From there, we head back down to the ring where Jade Cargill’s theme hits and out she comes along with Leila Gray. Already in the ring are their opponents, Jaida and Jordyn Vanity.

The bell sounds and we’re off-and-running with women’s tag-team action. Leila Gray kicks things off against Vanity and she slaps a front face-lock on her and controls her on the mat as the commentators promote tonight’s Daniel Garcia vs. Action Andretti main event.

Jade Cargill tags in and looks put out to even have to be in the ring. She dominates Vanity for a bit as the commentators even question which member of the Vanity team is in the ring right now. Gray comes back in and hits a face-buster. This one seemed over but Jade tells Gray not to cover her, but to instead tag her in.

Gray smirks and obliges. Cargill hits the ring and hits her Jaded finisher for the pin fall victory. After the match, we head to another commercial break.

After the usual pre-match interview segment hosted by Mark Henry, where the two men involved in the main event of the evening speak, we head back inside Save Mart Center in Fresno, CA.

The focus is on our final match of the evening, as Daniel Garcia’s theme hits and out comes the J.A.S. member to the ring. As he heads to the ring, Sammy Guevara joins Chris Jericho, Jim Ross, Excalibur and Tony Schiavone on commentary. They talk about the new leather pants that “The Spanish God” gifted Garcia that he is wearing tonight.

Now Action Andretti’s theme hits and out comes the rising prospect for our headline bout on this week’s episode of AEW Rampage. The bell sounds and we’re off-and-running with this one. Jericho and Guevara are gold straight out of the gate on commentary, talking about learning trees and sharing overly goofy compliments for each other.

As Garcia pulls further ahead on offense, we see the action spill out to the floor at ringside. As Garcia works over Andretti outside of the squared circle, we head to a mid-match commercial break as our main event of the evening continues.

When we return from the break, we see Garcia still in firm control of the action. Andretti eventually fights his way back into the lead after connecting with a big high spot out to the floor.

Back in the ring he comes twisting off the top rope with a crazy high spot and then follows-up with the same spot he used to score the upset victory over Chris Jericho to earn another big win over the J.A.S. by pinning Daniel Garcia here tonight.

As Andretti celebrates his win, we see Jericho and Guevara upset at the outcome. On that note, we head off the air. Thanks for joining us!