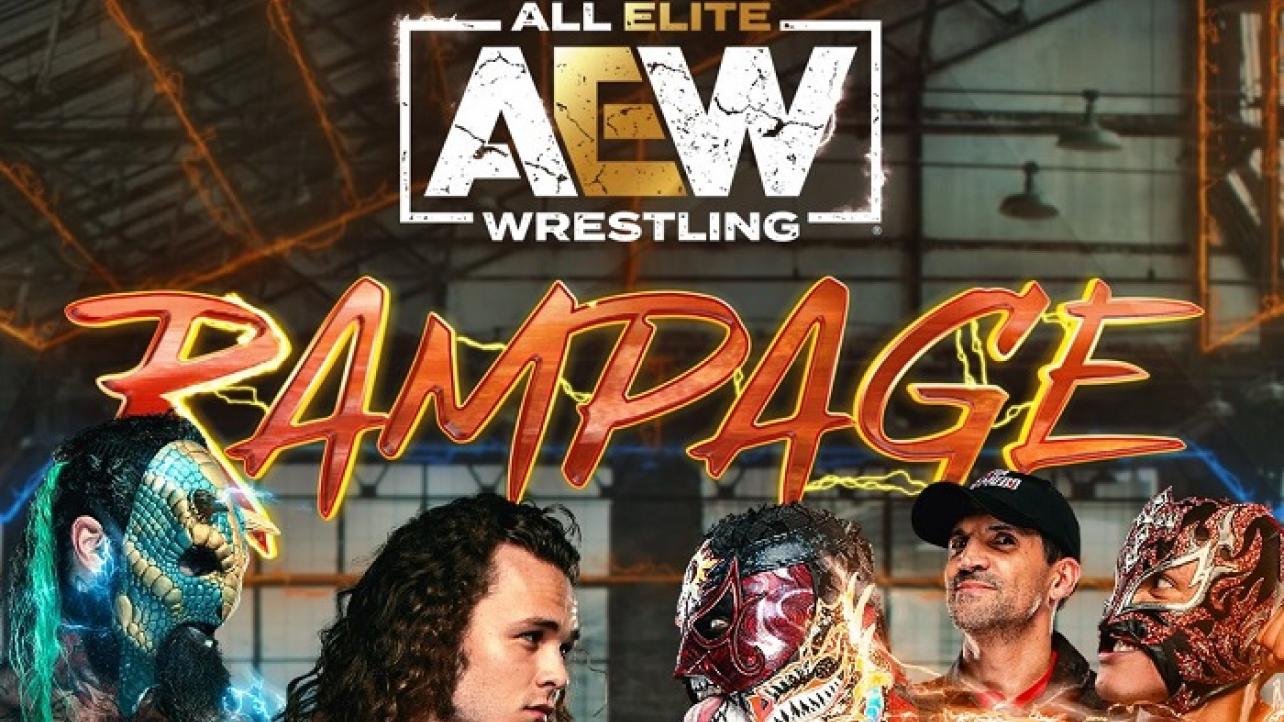 All Elite Wrestling returns with the latest edition of their weekly AEW Rampage series on TNT from the UWM Panther Arena in Milwaukee, Wisconsin.

On tap for tonight’s show is Jurassic Express vs. Lucha Bros in the AEW Tag-Team Title Eliminator Tournament, The Bunny vs. Tay Conti, Christian Cage & Frankie Kazarian vs. Kenny Omega & Brandon Cutler, an appearance by NBA Finals MVP Giannis Antetokounmpo, comments from CM Punk and Darby Allin ahead of their AEW All Out showdown and more.

Featured below are complete AEW Rampage results from Friday, August 27, 2021 at the UWN Panther Arena in Milwaukee, WI.

This week’s edition of the show kicks off with the signature intro video that kicks off every week’s show, with CM Punk now included at the top. We then shoot inside the UWM Panther Arena in Milwaukee, WI.

Excalibur welcomes us to the show and Chris Jericho, Mark Henry and Taz join him on commentary as we hear the familiar sounds of the entrance theme of Jurassic Express.

Jungle Boy and Luchasaurus make their way down to the ring accompanied by Marko Stunt. They settle in the ring where their opponents are already waiting for them.

“The Dapper Yapper” Justin Roberts handles the introductions for this finals bout in the AEW Tag-Team Title Eliminator bout. Before the match gets underway, however, The Young Bucks make their way out to get a first eye view of this match.

We hear the bell and this opening bout here on Rampage gets off-and-running. Jungle Boy and Rey Fenix kick things off for their respective teams. The match is all over the place coming out of the gate, with Jungle Boy hanging on and swinging around the ring post while running the ring apron.

From there, Jungle Boy hits the ring and Fenix starts to string together some nice offense as he establishes the offensive upper-hand. The camera shows NBA Finals MVP Giannis Antetokounmpo and the commentators acknowledge him on the broadcast as the crowd pops when they see him.

Now Luchasaurus and Penta both tag in and stare each other down. We see some more back-and-forth action as all four men end up laid out and The Young Bucks and aforementioned NBA star are shown watching on at what is turning out to be an excellent bout as we head to a mid-match commercial break.

As we return from the break, we see Fenix hitting a crazy splash on Luchasaurus on the floor. Meanwhile back in the ring Jungle Boy and Fenix both end up laid out and crawling to their corners as the fans chant “This is awesome!” and the tags are made on both sides of the ring.

Luchasaurus takes the hot tag and comes in the hotter of the two, taking out both Penta and Fenix by himself with relative ease. He blasts one with a massive heel kick and another with a chokeslam before hitting a standing moonsault press for a close near fall. The crowd is again making a ton of noise.

We see the big man from Jurassic Express go for another chokeslam on Penta, however Penta reverses and blasts him with some kicks and then tags Fenix back into the bout. He picks up where Penta left off, taking it to Luchasaurus and dominating the action. He shimmies his shoulders in a paying of homage to the late Eddie Guerrero and then hits a top-rope frog splash for a close near fall.

As the action continues, Luchasaurus hits a nice headbutt and then tags in Jungle Boy, who takes the hot tag and nearly finishes off Fenix. He hits a nice Tiger Driver and gets the leg trapped to go into the Snare Trap. Just as Fenix was about to tap out, Penta hits the ring to break it up. Penta ends up taking over the action, hitting a massive sit-down backbreaker into a made in Japan high-spot for a close near fall of his own.

Fenix and Jungle Boy set up a big spot after Fenix walks the ropes like a ninja. He pops up and hits a hurricanrana that sends Jungle Boy flying out, flipping and splashing onto a pile of wrestlers at ringside. Penta brings Jungle Boy in the ring and goes for the pin, however Jungle Boy kicks out before the count of three.

Penta tags in Fenix, who walks into a super kick from Jungle Boy. Luchasaurus sets Fenix up for Jurassic Express, but Fenix avoids it and counters his way out of the situation. We see a crazy Canadian destroyer on the ring apron that Jungle Boy takes that sends him out to the floor. He hits another on Luchasaurus in the ring and goes for the cover, but the big man kicks out at one.

The Lucha Bros hit a series of super kicks on Luchasaurus and then back-to-back double-team spots that finally finishes off the Jurassic Express duo and sends them to the finals to take on The Young Bucks at AEW All Out inside a steel cage for the AEW Tag-Team Championship.

Winners and ADVANCING to challenge The Young Bucks at All Out: The Lucha Bros

After The Match: Young Bucks Attack Lucha Bros, Jurassic Express Makes The Save

Hype For CM Punk vs. Darby Allin At AEW All Out

After the post-match scene wraps up, we shoot to a commercial break. When we return, the commentators send us to a video package that shows the AEW debut of CM Punk and then him calling out Darby Allin for a match at AEW All Out.

From there, the video package shows CM Punk sitting in a chair making new comments about the match, reiterating a previous point he made about how a 15 year-old CM Punk would be a fan of Darby Allin. He hypes up their match at All Out and then the trailer for All Out airs followed by a plug for the AEW Countdown to All Out special next Friday night.

We then head back inside the UWM Panther Arena where the theme for the TNT Champion hits. We see Fuego Del Sol’s body go flying through the entrance tunnel.

Miro comes out after him and drags him down to the ring. He gets on the mic and then says he’s gonna make Fuego show his face to the TNT Champion. He yanks his mask off and then super kicks Del Sol.

From there, Eddie Kingston’s theme hits and “The Mad King” makes his way down to the ring. Miro throws his microphone at him as he was coming down the ramp so Kingston sprints into the ring and gets into a big pull-apart brawl with several officials trying to keep them apart.

The Bunny vs. Tay Conti

Once the Miro/Kingston segment wraps up, we head to another commercial break. When we return, we head right back down to the ring for our second match of the evening here on Rampage.

The Bunny’s theme hits and she makes her way down to the ring accompanied by The Blade, who remains at ringside during this contest. Before the bell can even sound, The Bunny charges and attacks her opponent, Tay Conti, who is already in the ring.

This lets The Bunny get off to a big offensive lead here in the early goings. She makes a face into the camera after ramming into Conti in the corner, prompting some colorful commentary from “Le Champion” on the broadcast.

The Bunny controls the action for a while, but then Conti finally starts fighting back into competitive form. She has The Bunny out on her feet and then slams her down before running and slamming big boots into the grill of The Bunny in the corner of the ring.

As it looks like Conti is about to finish off The Bunny with a Tay-KO, we see Penelope Ford make her way down to the ringside area. As she hits a jawbreaker on The Bunny, we see Conti become distracted by Penelope Ford on the ring apron.

While the ref is distracted with that, The Blade passes brass knucks to The Bunny, who decks Conti with them before the ref’s back. She goes for the pin and picks up the victory and then poses with Penelope Ford after the win.

Don Callis and Omega do their usual shtick, and then Christian Cage gets in his “carny piece of sh*t” line aimed at Callis when referring to Cutler.

The main event competitors for tonight’s final bout of the evening here on Rampage settle into the ring after making their respective walks to the squared circle. Don Callis joins the four-man commentary team to make it a five-man team for the main event tonight.

We head to a pre-match commercial break before our featured attraction of the evening gets underway.

In the ring, Kazarian and Cutler kick things off for their respective teams. Chris Jericho and Taz have some fun making jokes at the expense of Cutler and Michael Nakazawa, who is also at ringside with Callis for The Elite team.

Kaz dominates Cutler with ease and then throws him into his own corner and tells Omega to be a man and tag in. The AEW Champion does tag in but before anything happens, Nakazawa trips up Kaz from ringside. The distraction allows Omega to jump onto Kaz and establish the early offensive lead on him.

Omega plays to the crowd to much, which allows Kaz to fight back into competitive form. He starts taking it to Omega and then tags in Christian. Cage comes in and Omega looks like he’s seen a ghost. He backs up quickly and tags out. Cutler comes back in and the IMPACT Champion beats him down and then tags Kaz, who picks up where he left off, taking it to Cutler.

Now we see a bunch of distractions as chaos breaks out at ringside with every one involved in this match. This allows Omega to take control of things, so he tags back in and goes to work on Kaz, taunting he, Christian and the fans all-the-while and scoring some close near falls.

Cutler asks for the tag, so Omega obliges. While Kaz is down and out after a prolonged one-sided beatdown from Omega, Cutler hits some very unathletic looking offense on him while stopping to do the dab dance every so often, prompting the commentators to mock him.

Christian hits a pair of back-to-back reverse DDTs and then backs in a corner and stalks Cutler, waiting for him to get up. As he does, Omega trips Cage up. Callis hops on the ring apron to distract the ref. Cutler holds Cage but Cage moves and Omega takes Cutler out. Kaz takes out Cutler again as Christian goes for the Killswitch on Omega.

Omega escapes before Cage hits it. He and Callis head up the ramp as Christian hits Cutler with a spear. Kaz goes out and looks at Omega, making sure he stays away from the ring as Christian hits the Killswitch on Cutler in the ring and scores the pin, picking up the win for he and Kaz in this week’s Rampage main event. That’s how this week’s show goes off the air. Thanks for joining us!