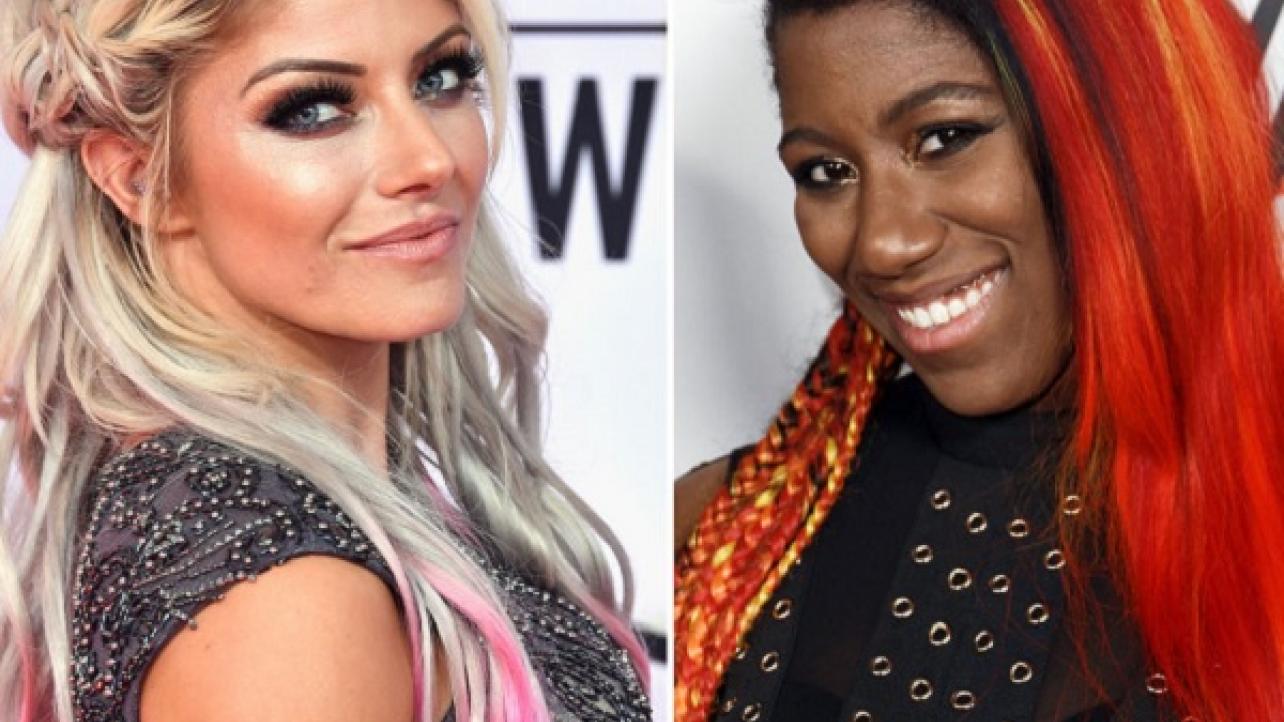 Alexa Bliss and Ember Moon spoke with SyFy’s “FANGRRLS” prior to the recent WWE Evolution pay-per-view to promote the first-ever all-women’s WWE PPV show. Featured below are some of the highlights from the interview, which was just released on the official SyFy website this week.

On who, if anyone, influenced their WWE ring attire:

Ember Moon: “So I have a lot of different influences, and each one of my gears is inspired by a different comic book character or villain. But mostly it’s inspired by my D&D character from way back when. Take my money in the bank gear; that was inspired by Loki. I know what happened to him in the last Avengers movie and I almost walked out. But also just different things, whatever floats my boat.”

Alexa Bliss: “I started cosplaying back when I was with Blake & Murphy; we decided that we were going to do an Iron Man gear, and that was the first one. It was so much fun to bring a little bit of our personal interests into the ring — especially because sometimes, when you’re so set in the storyline, in the character, you kind of lose who you are outside of that. So I love to take a lot of different inspiration for my gear, and I’m a big horror movie fan so I’ve done Freddy [Krueger], which was probably my favorite; and Chucky, which took me about a year to be able to actually do it. Because first it got turned down, and so then I kind of had to sneak it in on Halloween last year. I did one outfit that was Harry Potter colors, but I just wore it for one of the pay-per-views. Yeah, I’ve done a lot of cosplay stuff, and it’s a lot of fun.”

On being part of the historic, industry-changing women’s revolution in WWE:

Ember: “As someone who started working in a public storage building for a hot dog and a soda pop, going from being a match after intermission because everyone would leave to go get popcorn, or take their time getting back, it’s really cool to see how much the women at WWE have inspired that movement. It has been a revolution, it has been an evolution to see: going from The Jumping Bomb Angels way back in the ’80s, coming all the way up to seeing Becky and Charlotte and Alexa Bliss, or Stratus and Lita, and all these amazing women that have pioneered women’s wrestling— not just on camera, but behind the scenes as well.”

Alexa: “Yeah, it’s amazing. It’s awesome to see, especially with how far women have come. I remember even when I first started with WWE only five years ago, there wasn’t a lot to be expected from us and to see how far our women have come just in five years, even just from when I started. We’ve had these matches that would’ve never been expected from our women five, ten years ago. And now we’re doing them often, dominating them, and now we have our own Pay-Per-View. And I feel it’s something that the company behind us, the WW Universe, wanted to see our women succeed. And that just shows that it’s not even just the shift of WWE, it’s just the shift in the world. That people value women so much higher now in any section, any sport industry. We have women from diverse backgrounds being a part of this evolution. It’s so cool to see everyone come together for the love of what we do and to be able to perform together and keep this evolution going. I’m excited to see what the roster’s gonna look like in another year, five years, ten years from now.”

On what they feel defines a strong female character in WWE:

Ember: “For me, personally, it’s just not being afraid to be yourself. Not being influenced by your circumstances or environment. It’s just feeling comfortable being you and not letting anyone change who you want. That to me is a strong person, ’cause it takes a stronger person to say no and to not be influenced by other people than to just go with the status quo.”

Alexa: “I would have to say it’s confidence. A woman who is proud to be who she is respects herself and shows that women can be strong-willed, and the confidence to carry that. I feel like that can be an issue with women all over the world, insecurities and everything like that. A strong-willed woman is someone who’s just as strong mentally as they are physically, and I think confidence is the main part of that.”

Check out the complete interview with Alexa Bliss and Ember Moon at SyFy.com.