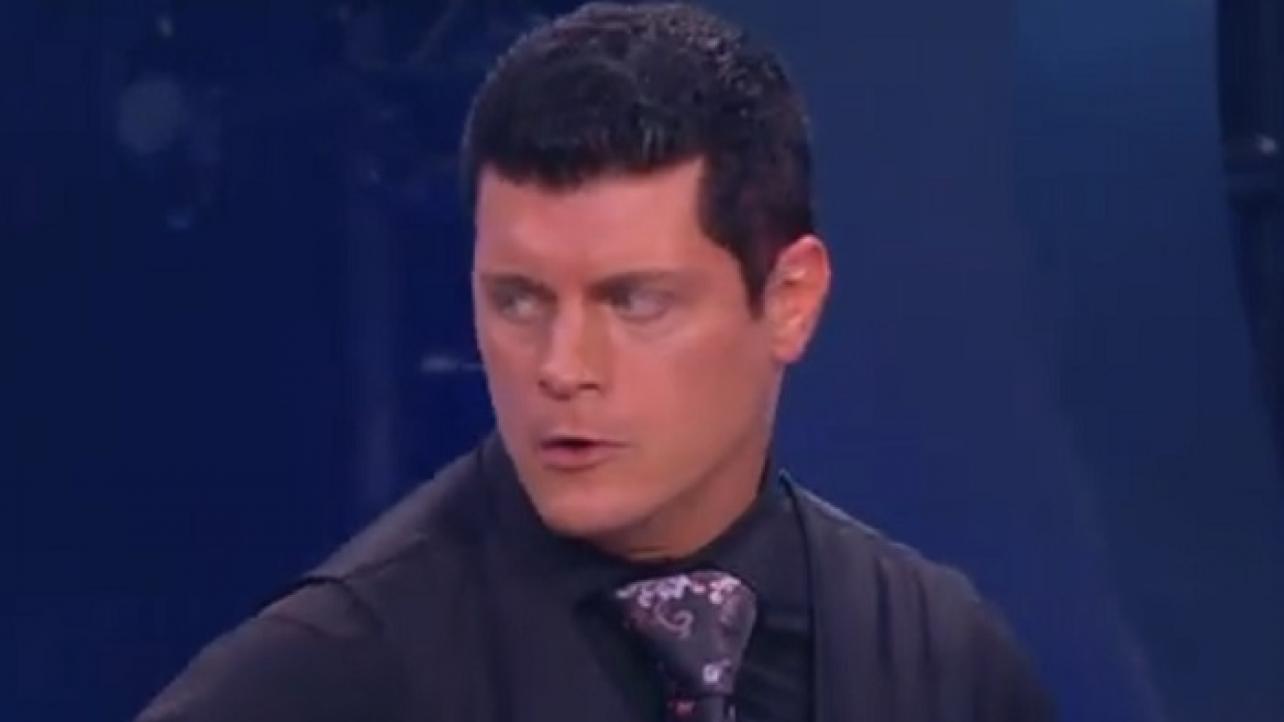 “The American Nightmare” is back, folks, and he’s sporting a brand new look.

Cody Rhodes made his return on AEW Dynamite on Wednesday night, hitting the ring for a post-match beatdown of members of the Dark Order following a successful TNT Championship defense made by “The Exalted One” Mr. Brodie Lee over “Freshly Squeezed” Orange Cassidy.

Cody came out to the ring with a new look, as the former bleach-blond haired EVP of All Elite Wrestling is now once again a brunette.

Featured below is a recap of the Cody return segment from our results for the Wednesday, September 23, 2020 episode of AEW Dynamite on TNT:

After the match ends, the lights inside the Daily’s Place amphitheater go out and some ominous music plays, slowly intensifying as the announcers acknowledge the unusual sight.

Finally, the music picks up and out walks “The American Nightmare” as Cody makes his long-awaited return here on AEW Dynamite. He comes out with new hair color, as the formerly bleach-blond hair-colored AEW EVP is now a brunette once again.

Cody takes out several of the members of the Dark Order who are still at or around the ring, including taking out one of them with a nice springboard cutter off the middle-ropes.

The announcers talk about how this not only looks like, but seems like a totally new “American Nightmare.” After his explosive return, we head back to another commercial break.

For those who missed this week’s AEW on TNT program, check out our detailed AEW Dynamite Results From Daily’s Place In Jacksonville, FL. (9/23/2020) right here at eWrestling.com!

View photos of “The American Nightmare” Cody’s new look debuted on his return on AEW Dynamite this week via the photos embedded in the tweet below.

The American Nightmare @CodyRhodes has returned to All Elite Wrestling. pic.twitter.com/HiMchst2oS

.@CodyRhodes is not the same man that we’ve known #AEWDynamite pic.twitter.com/mzirict0I5

And I come back to you now, at the turn of the tide. @CodyRhodes #AEWDynamite pic.twitter.com/uMLGUqUHHt

The action continues here on hour 2 of #AEWDynamite, as after #OrangeCassidy comes up short in attempt to capture the TNT Championship from Brodie Lee, the RETURN of “The American Nightmare” #Cody, as @CodyRhodes is back in #AEW!