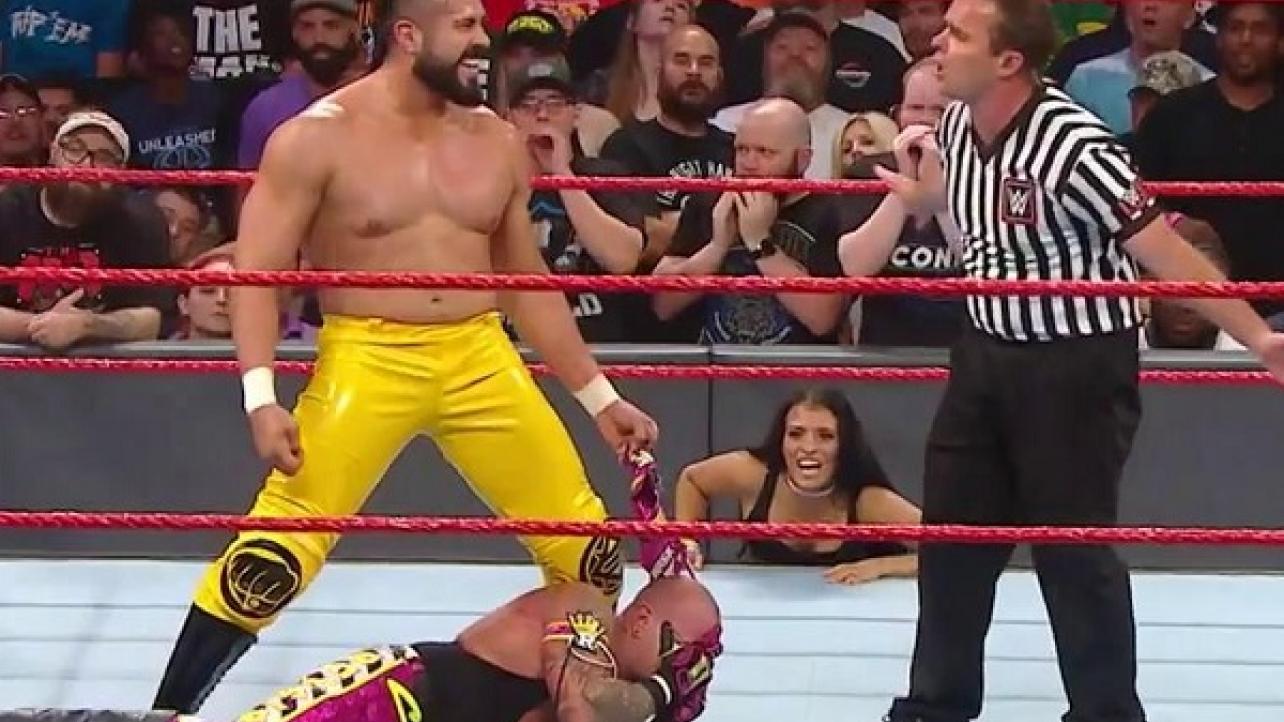 WWE is going back to the well with a story line about Andrade trying to take the mask from Mexican pro wrestling legend Rey Mysterio, and on Monday’s episode of RAW, the intensity picked up a few notches.

Following Monday night’s episode of WWE RAW at the Verizon Arena in Little Rock, Arkansas, Rey Mysterio spoke in a backstage interview about having his mask torn off by Andrade during the show.

“That’s when you think about the hard work you’ve put in, and it just goes to show that I’ve worked really hard but not enough. I needed to go through two more rounds and tonight just wasn’t my night, but I can’t live with that weight on my back forever. Tonight was just one bad night that happened; and even though the circumstances were a bit horrible,” Rey said as he takes a look down at his mask.

“Because the only person that has ripped my mask before, in the past, has been Eddie Guerrero and Randy Orton. Now Andrade took it overboard. I have two main goals in mind right now – first, get that U.S. Title back, and second, take care of Andrade for what he did tonight.”

Mysterio would go on to refer to Andrade as “the future of WWE” after once again drawing a comparison between his style of work in the ring and late WWE Hall Of Famer Eddie Guerrero’s.

“[Andrade] is awesome. I mentioned it before in previous interviews, but every time I’m in the ring with him, there’s an affiliation to how I would move with Eddie [Guerrero],” said Mysterio. “This is how good he is: he’s thinking a step ahead before you even move. He already knows the positioning and knows exactly what to do and how to do it. My hat goes off to Andrade as he’s definitely the future of WWE.”

After RAW went off the air on Monday night, Andrade took to social media to gloat about tearing off Mysterio’s mask during the show.

On Twitter, Andrade wrote, “I am the new face of Latinos!!! I will end with the legacy of Rey Mysterio!” along with a photo of him tearing Mysterio’s mask off from RAW.

Additionally, Andrade posted the same photo on Instagram, however the caption for that post read, “I enjoyed this moment so much, I remembered my time in Mexico when I did this every week !!!”

Check out the post-RAW backstage interview with Rey Mysterio below.

For the aforementioned social media posts by Andrade insulting Rey Mysterio, as well as a series of photos and close-ups of Rey Mysterio being unmasked on Monday’s episode of WWE RAW, click here.

I enjoyed this moment so much, I remembered my time in Mexico when I did this every week !!! Recordando destruir mascaras #elidolo #andrade #reymisterio

I am the new face of Latinos!!! I will end with the legacy of #ReyMistero https://t.co/xU8Roj15uq

He’s got ONE MORE opponent to deal with! #RAW #GauntletMatch pic.twitter.com/TgHpKweILt