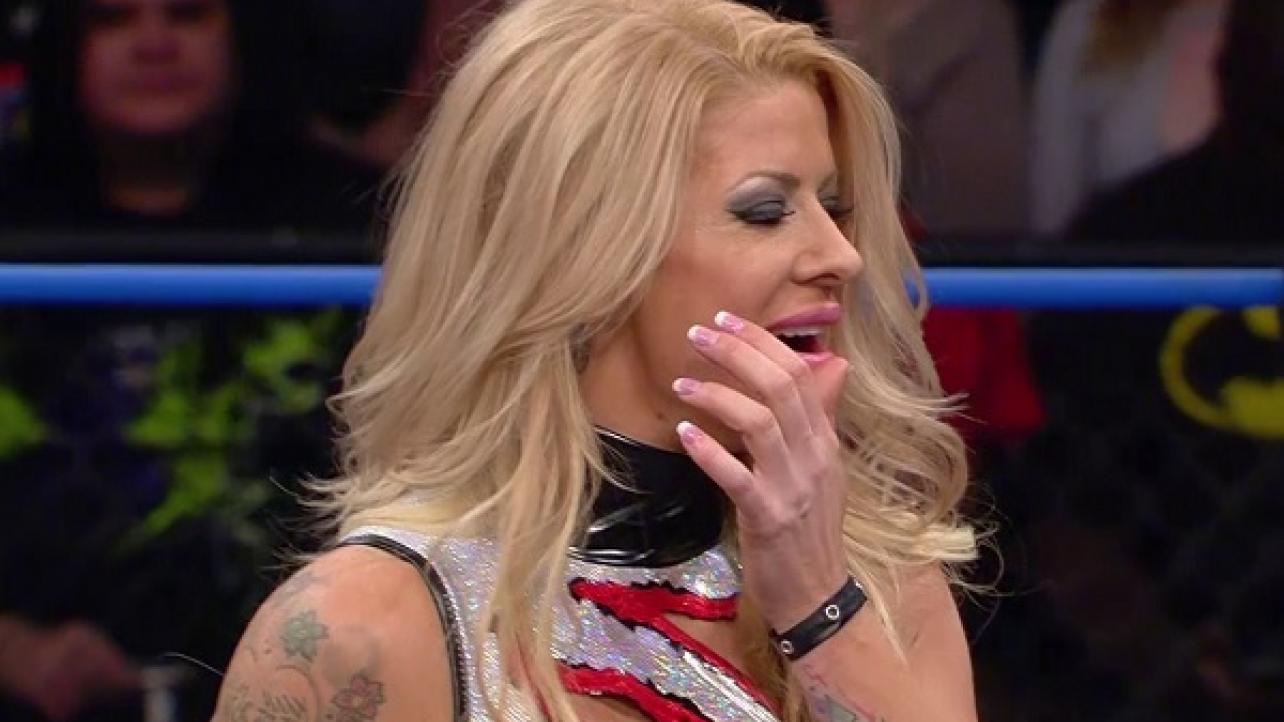 Former Impact Wrestling Knockouts Champion Angelina Love recently spoke with the folks from Hannibal TV for an in-depth interview about her career. Featured below are some of the highlights.

On her most memorable moments in Impact Wrestling and suffering a concussion while winning the Knockouts title for the first time: “I have a lot of highlights… I would love to say the first time I won the Knockouts title was a highlight, but I was completely unconscious when I won the title. So I don’t remember. I got a concussion live on pay-per-view. It was Lockdown 2009 in Philly, and I was in a cage match. It was me, Taylor Wilde and (Awesome) Kong, and I think Kong was the champ at the time. And right towards the end of the match, Taylor did a cross body off the top, and landed on my brains on the mat. And I was just like (out). We were supposed to go into this whole intricate sequence for the finish, and Kong was tied to the cage, and I was unconscious, and Wilde was like, ‘Alright, we’re live on pay-per-view, what do I do?’ But I did end up winning, but that wasn’t quite what we had planned. But obviously, highlights was The Beautiful People. I mean, we got to do a very history making character/gimmick which we’re still doing ten years later. So we’re pretty happy about that.”

On having a developmental contract with WWE from 2004-2007 and how she was released: “I lived in Louisville for a week. I’ve known Nova (Simon) since I was 19, he always calls me Williams. I was the only girl in Deep South from the day the doors were open and until the day the doors were shut. And then I went to Louisville and did one training class, one show, one tape review and I got released that night. And I thought he was joking because at one point in Deep South when I was actually being brought up to TV for something, and he called me like he was firing me, and it was this big joke or whatever.

“I thought he was joking, and he was like, ‘Listen to the tone of my voice. Do I sound like I’m joking?’ And I was like, ‘Oh my God!’ And I was in Louisville only for a week. So my parents had actually driven from Toronto eleven hours down to Louisville to help me get everything set up, because as soon as I got there, I had to go work. So they pretty much got my entire apartment set up for me like laundry, they got cable set up. My mom (kept) food in the fridge, and everything like my room was put together, my living room put together. We had to give everything back, because I only had stuff for two days. And I lost money on delivery fees and deposit on an apartment.

“When Nova had called me, my parents had called me thirty minutes prior to say they had just crossed the border back into Canada, they had driven like eight hours. And I was like, ‘I just got fired’. And my mom was like, ‘What?!’ And then she said, ‘Do you want to come home?’ And I said, ‘Get me out of here’. My parents stopped on the dime, turned around, crossed the border again and drove eight hours back to Louisville and got to my place at like 6 in the morning. We all napped for a little bit and started the process of leaving the next day. I have rockstar parents by the way.”

Check out the complete Angelina Love interview with Hannibal TV below.