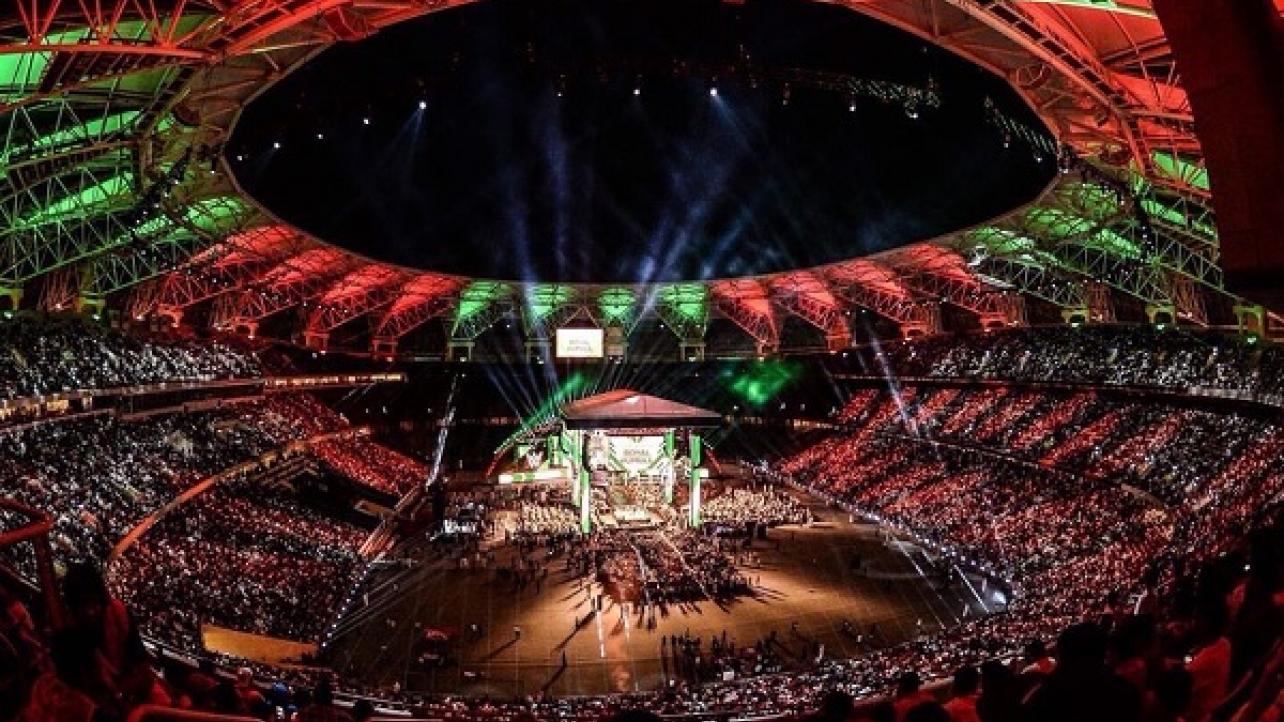 The Associated Press covered the WWE women’s evolution and the conflict of continuing to run shows in Saudi Arabia as the controversy surrounding the upcoming Crown Jewel show in Riyadh continues.

The article features comments from Stephanie McMahon, as well as WWE Superstars such as Alexa Bliss, Natalya and others, and pro wrestling journalists / insiders. Check it out below.

Former WWE champ Alexa Bliss ditched her skimpy two-piece ring gear for a full bodysuit. Performing for the first time in the United Arab Emirates, where strict rules govern what women wear in public, Bliss wasn’t about to risk offending a nation set to have WWE female wrestlers fight on the same card as the men.

She went hold-to-hold with Sasha Banks to make wrestling history — and fans in a country where women have had to fight for the right to drive responded with chants of ”This is hope!”

“The welcome was so warm,” Bliss said of fighting Banks for the WWE Raw women’s championship, a year after female stars made only promotional appearances at the event. “They were up-to-date with women’s story lines. There were little girls crying in happiness. It was just so cool because we got to have that moment with them.”

The December bout was widely hailed as an empowering, key moment for the sports entertainment giant — progress toward a stated goal to transform how women’s wrestling is promoted. WWE is taking another step this weekend with a pay-per-view card in New York featuring all female wrestlers, dubbed Evolution and headlined by former UFC star Ronda Rousey .

“It’s not just a women’s evolution in WWE,” Bliss said. “It’s an evolution all over the world.”

Don’t ring the bell for the win just yet.

WWE set aside its women’s movement in favor of a more lucrative statement in Saudi Arabia, an event next month titled Crown Jewel with female wrestlers banned from competition. The deal has prompted a public smackdown from fans , bipartisan criticism from politicians and lampooning from late-night hosts, backlash that took a turn and grew louder after writer Jamal Khashoggi was killed in the Saudi Consulate in Istanbul .

The financials are murky but WWE was expected to make between $20 million and $40 million from the two Saudi Arabian shows this year, as part of a 10-year deal.

WWE will say running Saudi Arabia is all about their hope of inspiring change,” wrestling journalist Jason Powell said. “It screams cash grab regardless of how they spin it. I’m happy the women are getting their own show and they deserve it, but the company’s ongoing business relationship with the Saudis is a black cloud hanging over not just the Evolution event but the company as a whole.”

There are now hints the show may not happen as planned. The wildly popular Undertaker heard boos when he talked about Crown Jewel in a promo last week on “Smackdown.” WWE has heavily downplayed Saudia Arabia itself in its promoting of the event. The country wasn’t mentioned as Crown Jewel’s site on recent television shows and it doesn’t show up on advertising on its website .

WWE has said it was “monitoring the situation.”

Natalya Neidhart, niece of WWE Hall of Famer Bret “Hitman” Hart, said she hoped that should WWE proceed, changes for women could happen over the course of the deal.

“You’re not going to change a culture overnight. I think WWE is taking such positive steps in doing positive things over in Saudi Arabia,” she said. “One day, I believe that we will be over there.”

Bliss said she believed women should get the chance to wrestle in Riyadh.

“I don’t feel like it’s out of reach,” she said. “Who knows? I don’t think it’s ever not a possibility.”

Until then, if ever, WWE is counting on events like Evolution to push women into the headlines.

WWE has started to give women equal billing with men on the biggest cards. Its event at Nassau Coliseum on Sunday is a statement, topped by one of the most famous and marketable athletes in sports in Rousey.

The WWE has delivered a list of firsts for women over the last two years — from the brutality of a Hell in a Cell match, the ladder-climbing, briefcase-snatching Money in the Bank bout to the Royal Rumble where Rousey made her debut — the kind of over-the-top gimmick fights that for decades had been reserved for men only.

“We’re running out of first-evers because the women are taking over,” Neidhart said. “I feel like in the WWE right now, it’s becoming normal for women to be at the forefront.”

John Cena, Daniel Bryan and The Miz are sitting Sunday out. Rousey headlines Evolution against Nikki Bella, Becky Lynch takes on Charlotte Flair, and Bliss and Mickie James team up to face returning stars Trish Stratus and Lita in the other top matches.

WWE was a bit late in the fight game in pushing females to the top of the card. Rousey headlined her first UFC pay-per-view in 2013 and female boxers have long straddled the line between seriousness and sideshow. WWE first saw the value of a legitimate women’s division in its developmental NXT promotion and started giving major story lines and longer matches to future WWE stars like Flair, Banks, Bayley and Asuka.

Bliss grew up a wrestling fan (she laughed that her grandmother wanted to marry Dusty Rhodes) and she’d jump in a pool with her cousins as they mimicked stars like the Hardy Boyz and Lita. Now, little girls emulate the 5-foot-1 troublemaking “Goddess” of WWE, who, despite her bad-girl persona, credits fans who pushed on social media for women to get star billing like Steve Austin or the Rock.

Bliss, who signed with the WWE in 2015 in the midst of its shift, described it as a time when fans wanted more for women.

“Our fans saw that we were getting 30-second matches. They saw we were capable of more, we just weren’t getting the opportunities,” Bliss said. “It was our fans who rallied behind us and saw we were deserving of more.”

Stephanie McMahon, WWE’s chief brand officer and main event female villain, is touting Sunday’s show as a chance to show how much the company has changed its presentation of women.

“Our women were treated as secondary, if not tertiary type, characters and our fans had had enough,” McMahon told The Associated Press before a pay-per-view event in August. “They started a hashtag that trended on Twitter for three days, #givedivasachance. Specifically calling for better matches, longer matches, more athleticism, better story lines. Their voices were so loud that our chairman and CEO, my father (Vince McMahon), heard them and said, keep watching and we’ll give divas a chance.”

WWE is making clear its long term plans even though those efforts for women have been clouded by its Saudi Arabia deal. The promotion wants to keep the focus on the women actually fighting in New York, not their absence overseas.

“Now, you have little girls everywhere saying, ‘I want to be a WWE superstar,’” Neidhart said. “I want to be like those girls. It’s because of the movement.”