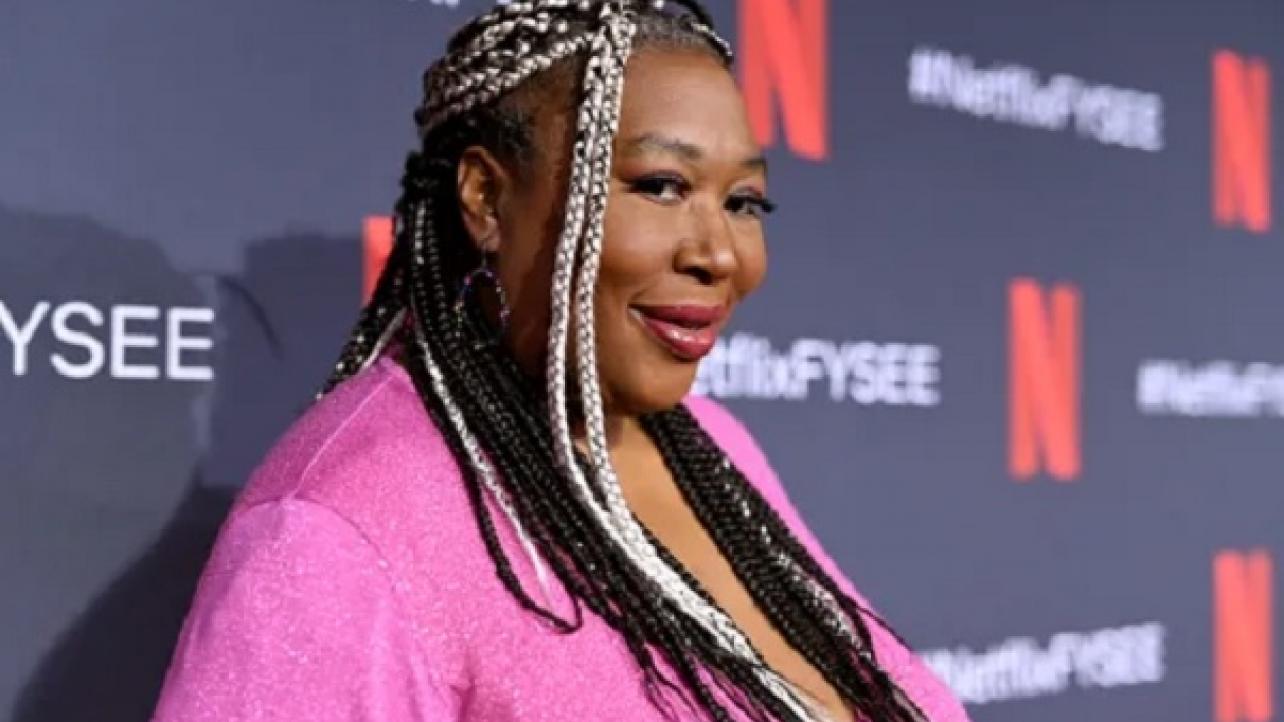 Awesome Kong On If She Can Balance GLOW & AEW: “I’m Going To Try”

Ahead of the season three premiere of GLOW on Netflix on Friday, August 9th, cast-member of the popular series and current All Elite Wrestling (AEW) performer Kia Stevens, a.k.a. “Awesome Kong,” took some time to speak with Alex Biese (@ABieseAPP) of the Asbury Park Press. Featured below are some of the highlights from the interview.

On going back to the Awesome Kong character in May when she made her AEW debut at the Double Or Nothing pay-per-view: “It was strange to slip back into her skin and psyche because Kong is a totally different psyche from Kia, and I seriously was in my room the night before, praying on it that she would appear and that I would remember everything about her psyche to get to that place.”

On the reaction she received from the AEW fans in Las Vegas at Double Or Nothing: “The reception was so breathtaking that my knees almost buckled. I almost didn’t make it to that ring because my legs turned to jelly. I love wrestling fans for that.”

On GLOW theme in the series about wear-and-tear that pro wrestlers endure throughout their careers: “I thought they were spot-on, especially because I actually struggle with back injuries. So, when I read through my script it was (like it was) straight out of my diary.”

On balancing her role on the GLOW series on Netflix and her work as Awesome Kong in AEW after her second appearance at the Fight For The Fallen special: “I think it’s possible, I think it’s very possible. We’re certainly going to try. AEW is very flexible, and they want to give the wrestling community what they want.”

On the current state of women’s wrestling: “It’s a long time coming. I’m just really happy that women are finally being seen as athletes and people who can compete, can perform at the caliber of the men and are given the opportunity to be performers and not like a sideshow. So I’m glad that I feel like I had a little bit to do with that. I’m glad I’ve been able to do my part.”

Check out the complete Awesome Kong (Kia Stevens) interview at App.com, and make sure to check out the season three premiere of GLOW on Netflix on Friday, August 9th.

.@GlowNetflix returns Aug. 9, and it’s terrific! I had the awesome pleasure of speaking with @MeanQueenK about the show and her return to the ring in @AEWrestling! https://t.co/jC6I5vAkFM

Awesome Kong On If She Can Balance GLOW & AEW: “I’m Going To Try”