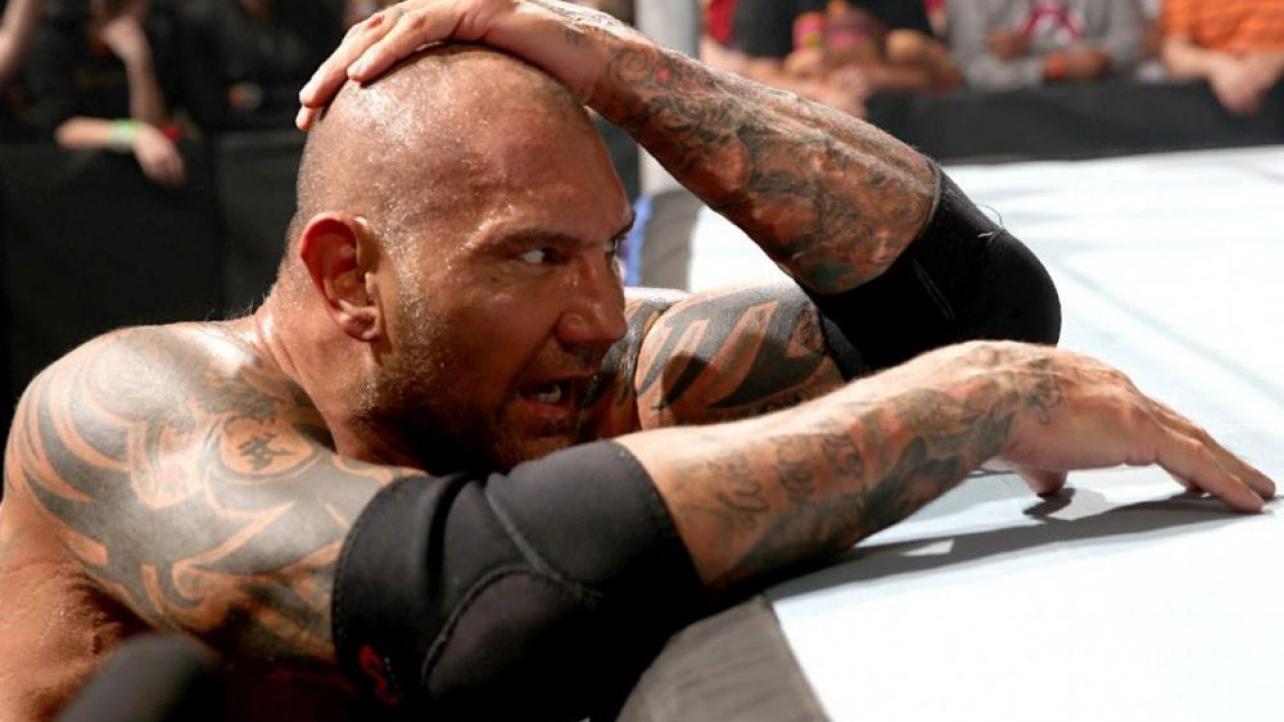 Batista Talks About Not Understanding CM Punk Fanfare In WWE, Steve Austin’s Advice For Him

As noted, former WWE Superstar and emerging Hollywood actor Dave Bautista (Batista) recently joined Edge and Christian as a guest on their podcast, E&C’s Pod Of Awesomeness for an in-depth interview. Featured below are some additional highlights.

On wishing his most recent run in WWE never happened: “Man, if I could do that whole run over, I know I probably wouldn’t be able to make much difference, but I wish it didn’t happen. It was just bad all the way around. I argued every day with writers and Vince and everything because, from the first day, I just didn’t like the way things were going. There’s nothing else I could’ve done. I tried everything I could and the only thing I really regret about that whole run, and it sounds really awful, but I just didn’t put a lot of effort into going back in better shape. And now, when I see pictures of myself from then, I know the fans expect a certain look from me, and I didn’t give it to them and I kind of realize it sounds really stupid, but I wish I put more effort into the shape that I was in because I didn’t. I just wanted to go back and wrestle. I wasn’t so concerned about being ‘The Animal’ and looking that way.”

On the fans cheating themselves during his latest WWE run: “That whole run in particular was just… I mean, it even started with an uphill battle, but the thing that really frustrated me and confused me was just the crowd, man. I didn’t get it. They were just so focused on what wasn’t there in front of them that they lost sight of what was there in front of them. And I felt like they cheated themselves. I mean, no matter what was going on, and not even just with my matches, but with a lot of the other matches, it was ‘Daniel Bryan’ chants and ‘yes! Yes! Yes!’ and ‘CM Punk’ chants. And I’m like, ‘you’re missing some really good wrestling here. This is, like, good stuff, man!’ I felt like they were the most unfocused group of fans I ever encountered, and it was just really, really confusing to me because I couldn’t even understand why they’re there. Why are they paying their money to come watch a show that they’re not even watching? It just baffled me.”

On not understanding the fanfare that surrounded CM Punk after he walked out on WWE: “[Edge and Christian] know I love Punk. I’ve always gotten along with Punk and I had to hear from people that he left because I came back. Where the hell did that come from? And I’ve said, I wasn’t crazy about the way he left because that’s not the way we did business. We just don’t do that, especially when you’ve got guys… and Brock [Lesnar] did it way back in the day as well. You’ve got a million guys lined up to put this guy over and then he just leaves! Just leaves, doesn’t give anything back, doesn’t build any stars to fill those spots, and that’s the way we do business. That’s the way we’ve always done business. And I just can’t respect when people lose sight of that. And again, it’s not a knock on Punk because I think very highly of him. I just don’t agree with the way he left. And the fans, definitely, with that kind of stuff, when he’s not there, and people are still chanting his name, it just confuses me. And I get that they don’t have that same type of insight, but at the same time, I just can’t relate.”

On why he left WWE to pursue an acting career: “My contract was running up and I decided I was going to leave. And I had a long talk with Vince about it. He knew what I wanted to do and what I wanted to pursue and I just wasn’t getting those opportunities from inside the company and other guys were and I thought that it was really unfair if I’m not getting the opportunities inside the company that I should be able to go outside the company, and audition, and whatever. And they just wouldn’t let me, so I said, ‘well, when my contract runs out, I’m going to leave.’ And actually, my contract was seven more months, but Vince asked me to stay an extra couple of months to do the whole run with [John] Cena and I said, ‘yes, I would,’ so nine months later, I walked out the door kind of with nothing.

“I was actually passing up a lot of lead roles in straight-to-DVD stuff, and that was kind of advice Austin had given me like way back before he left, when he knew what I wanted to do and I was talking to him about it. And he said, ‘man, you’re going to be offered these roles and if you start taking a lot of them, you’re going to get stuck in that rut.’ And he said, ‘don’t get stuck in that rut.’ So I was very aware of that, so I passed up on a lot of those roles, even though it was hard and they would’ve paid for some bills and I needed the money at the time, but I wanted to be an actor and I wanted to be in good films.”

Check out the complete Dave Bautista interview from the Edge & Christian’s “E&C Pod Of Awesomeness” at Art19.com.

Batista Talks About Not Understanding CM Punk Fanfare In WWE, Steve Austin’s Advice For Him