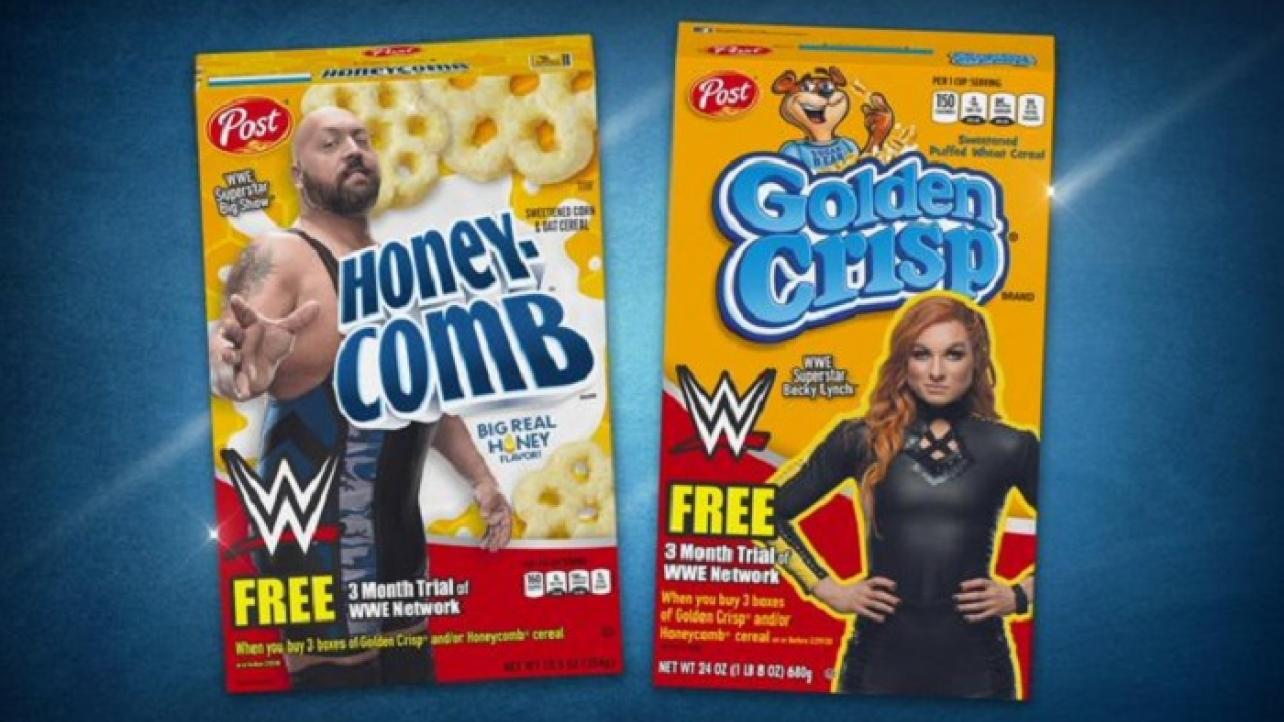 It looks like WWE 2K20 won’t be the only mainstream product on shelves you will see Becky Lynch featured on.

WWE sent out an announcement on Friday to announce that “The Man” and WWE veteran The Big Show will be featured on million of boxes of POST cereals.

LAKEVILLE, Minn., and STAMFORD, Conn., Sept. 26, 2019 – Post Consumer Brands and WWE® (NYSE: WWE) today announced an expanded partnership that brings the thrill and excitement of WWE to cereal boxes nationwide as superstars Becky Lynch and Big Show will be featured on the front of nearly 7 million boxes of Post Honeycomb® cereal and Post Golden Crisp® cereal. The partnership was announced today at Advertising Week in New York City.

Raw Women’s Champion Becky Lynch will be featured on the front of Golden Crisp cereal, whose iconic mascot Sugar Bear remains a beloved fan favorite, while Big Show will be featured on boxes of Honeycomb, a cereal known for its big flavor and unique big honeycomb shape.

“Post and WWE are the perfect match, as both brands appeal to the entire family,” said Roxanne Bernstein, Chief Marketing Officer, Post Consumer Brands. “WWE programming is family-friendly, with more parents and kids watching its action-packed content together than other sports leagues. This partnership is a great way for us to engage with fans of WWE.”

“We are excited to expand our partnership with Post, which leverages the family-friendly essence and reach of the WWE brand,” said John Brody, WWE Executive Vice President, Global Sales & Head of International. “Having our larger-than-life WWE superstars featured on millions of Honeycomb and Golden Crisp boxes is a tremendous statement for our partnership and will enable Post to further reach millions of families across the country.”

The partnership will be supported by a variety of social media and marketing initiatives, including digital spots featuring Becky Lynch and Big Show, which are available for download here.

For a limited time, fans can get a free three-month trial of WWE Network when they purchase three boxes of participating Honeycomb cereal or Golden Crisp cereal and redeem their receipts online. The promotion begins Tuesday, Oct. 1, 2019, and runs through Saturday, Feb. 29, 2020. To redeem the promotion and for full details and terms, please visit www.wwexpost.com.

Post Consumer Brands is a business unit of Post Holdings, formed from the combination of Post Foods and MOM Brands in May 2015. Headquartered in Lakeville, Minn., Post Consumer Brands today is the third-largest cereal company in the United States, with a broad portfolio of products spanning all segments of the category – from iconic household name brands and value ready-to-eat cereals to natural/organic and hot cereal varieties. As a company committed to high standards of quality and to our values, we are driven by one idea: To make better happen every day. For more information about our brands, visit www.postconsumerbrands.com.

WWE, a publicly traded company (NYSE: WWE), is an integrated media organization and recognized leader in global entertainment. The company consists of a portfolio of businesses that create and deliver original content 52 weeks a year to a global audience. WWE is committed to family friendly entertainment on its television programming, pay-per-view, digital media and publishing platforms. WWE’s TV-PG, family-friendly programming can be seen in more than 800 million homes worldwide in 28 languages. WWE Network, the first-ever 24/7 over-the-top premium network that includes all live pay-per-views, scheduled programming and a massive video-on-demand library, is currently available in more than 180 countries. The company is headquartered in Stamford, Conn., with offices in New York, Los Angeles, London, Mexico City, Mumbai, Shanghai, Singapore, Dubai, Munich and Tokyo.

Check out exclusive photos of Big Show and Becky Lynch on the cover of various Post brand cereal boxes below.