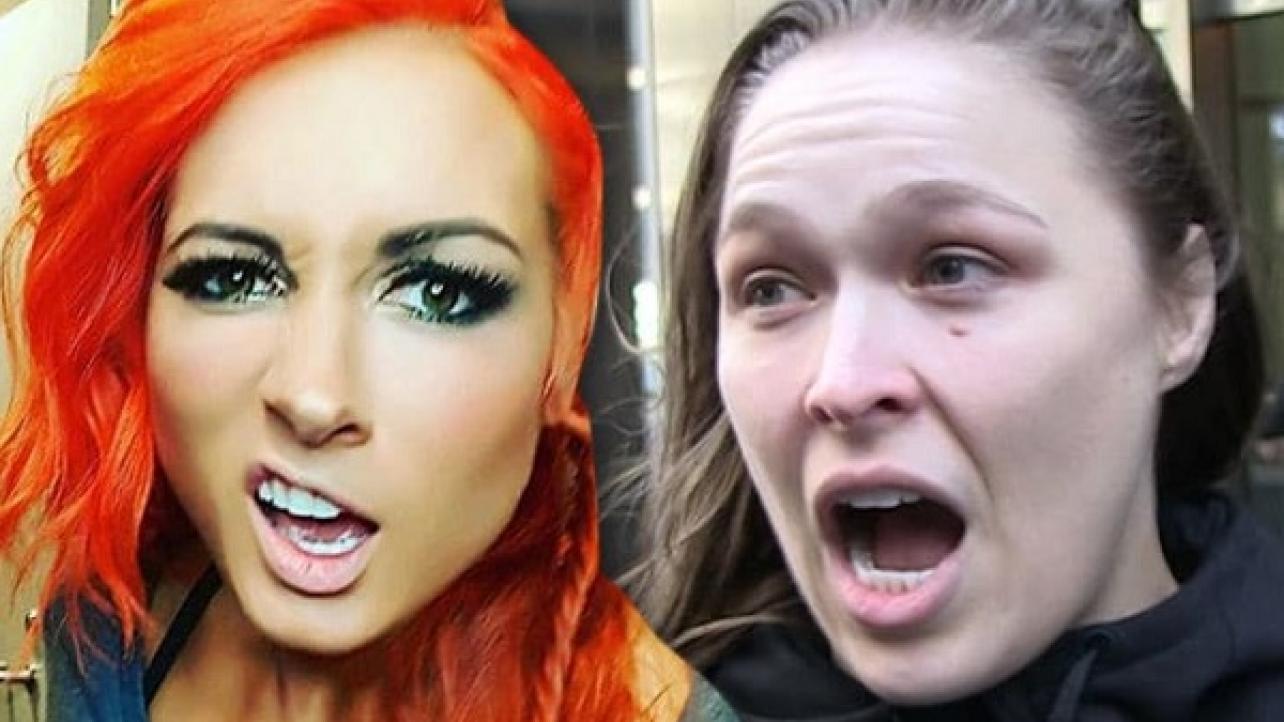 Becky Lynch On Ronda Rousey: “She Throws A Little Hissy Fit When She Gets Beat”

RAW and SmackDown Women’s Champion Becky Lynch recently spoke with Chuck Carroll of CBS Los Angeles for an interview. Featured below are some of the highlights.

On being open to facing Ronda Rousey at WrestleMania 36 in 2020: “If Ronda Rousey is ready to come back to try and prove herself, I would absolutely take her on. If not, then there’s plenty of other women here who are ready, willing, going day in, day out, that I would love to fight.”

On her thoughts of how Rousey handles losing: “Ronda Rousey is a tremendous, natural, athlete. She’s born tough and born tough isn’t the same as being made tough. I think I saw the best of Ronda Rousey, but we also saw what happens when she gets defeated. She leaves, and we haven’t seen her since. I think that her name outside of the business, maybe, brought in a few new eyes, which helped build momentum. I enjoyed my bouts with Ronda Rousey. I enjoyed playing mind games with her. I enjoyed the little beatings that she would give me, because it made me fight a little bit harder, and if she ever wants to come back then I’m ready, and waiting, to take her on again.”

On if she thinks Rousey will return to WWE and more on how she handles losses: “I don’t know, I don’t know, we’ve seen what happens when Ronda Rousey gets beat. She throws a little hissy fit and she goes hiding under her blankie for however long, but she is a tremendous athlete. She is the baddest woman on the planet, but I beat her.”

On preparing for two opponents in Charlotte Flair and Lacey Evans for her two title defenses at WWE Money In The Bank 2019: “Here’s the thing. I’ve owned Charlotte time and time again. We know each other inside out, which is both a good thing and a bad thing, because we’re evenly matched. She knows what I’m going to do, I know what she’s going to do. We’ve had so many matches. At this stage, what I think, when we tally up the votes, I’ve come out on top way more times than she has.

“Lacey Evans hasn’t done anything is this business to prove herself. I don’t know anything about her. That’s the dangerous part, is that I’m going in against the unknown, but that’s nothing that I haven’t done in the past. I hadn’t had a match with Ronda Rousey before I beat her, and nobody had beaten her before I had. You never know how things are going to go.”

Check out the complete Becky Lynch interview at CBSLocal.com.

Becky Lynch On Ronda Rousey: “She Throws A Little Hissy Fit When She Gets Beat”