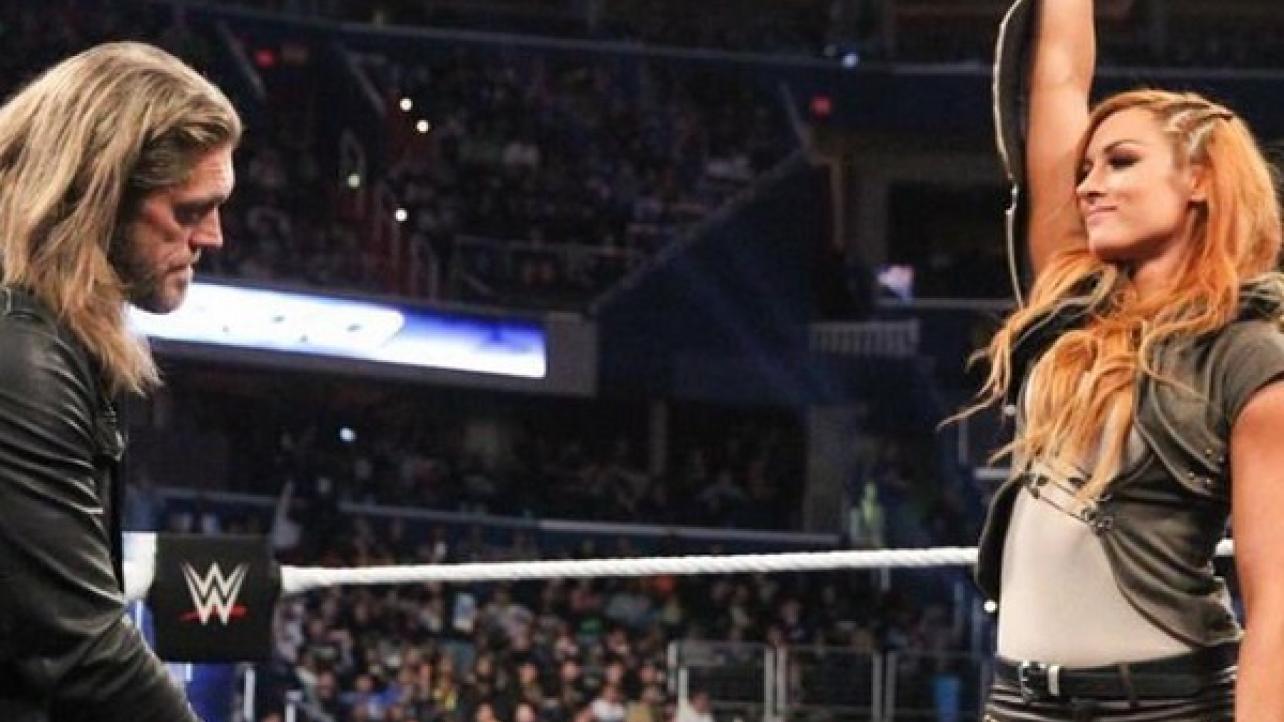 Becky 2 Belts went after WWE Hall Of Famer Beth Phoenix in a post made on her official Twitter page that showed Phoenix standing next to Lynch while she was posing with her RAW and SmackDown Women’s Championships held high in the air.

“Don’t get too close to that title [Beth Phoenix],” read the caption that Lynch included in the tweet.

“No worries [Becky Lynch],” wrote Phoenix in response. “…I’m just glad that we are friends and not steaming over a silly little detail like being tied for number of title reigns. Cheers!”

From there, things only picked up as the real-life husband and boyfriend of Phoenix and Lynch ended up getting brought into the mix.

“Yeah, we’re neck and neck alright,” wrote Lynch in another tweet responding to Phoenix’s earlier reply. The tweet included a photo of a standing, confident and celebratory Becky Lynch posing with the Women’s Championship in front of a seated, dejected and retired Adam Copeland.

This prompted the WWE Hall Of Famer and host of the E&C’s Pod Of Awesomeness podcast with fellow WWE legend Christian to chime in with a tweet responding to Lynch’s post.

“Listen The Man, you’re doing good for yourself now kid,” wrote Edge in a reply to Lynch’s aforementioned tweet. “But we can all find the footage of your steampunk phase, with a familiar entrance where you attempt Edge lite. And fail.”

The Rated-R Superstar concluded, “Sooooo begone with you.”

“Yeah, no, you’re right, Edgester,” wrote Lynch. “They want me to be nicer on social and I forgot. On this day, I see clearly. Everything has come to life. Pals?”

Additionally, “The Glamazon,” the real-life wife of Edge, came back with an additional tweet of her own directed at “The Man.”

“Wait wait…are we involving our men now…” wrote Phoenix, which Lynch apparently took as a threat that she would confirm rumors of Lynch and WWE Universal Champion Seth Rollins dating in real-life (View Photos Of Becky Lynch & Seth Rollins On Rumored “Dates” Here).

Beating her to the punch, Lynch fired back with yet another tweet that simply read, “I’ll ask him….. [Seth Rollins]?” and included a tag to “The Architect’s” official WWE Twitter page.

Check out the back-and-forth Twitter War brewing between Becky Lynch and Beth Phoenix below. For the latest updates, continue to check back here at eWrestling.com. For other late-breaking pro wrestling & MMA news, rumors and photos, follow LOP reporter Matt Boone on Twitter @MattBoone1984.

No worries @BeckyLynchWWE …I’m just glad that we are friends and not steaming over a silly little detail like being tied for number of title reigns. Cheers! https://t.co/ypXjz2ZQkT

Listen The Man, you’re doing good for yourself now kid. But we can all find the footage of your steampunk phase, with a familiar entrance where you attempt Edge lite. And fail. Sooooo begone with you. https://t.co/O6BaWb99Ac