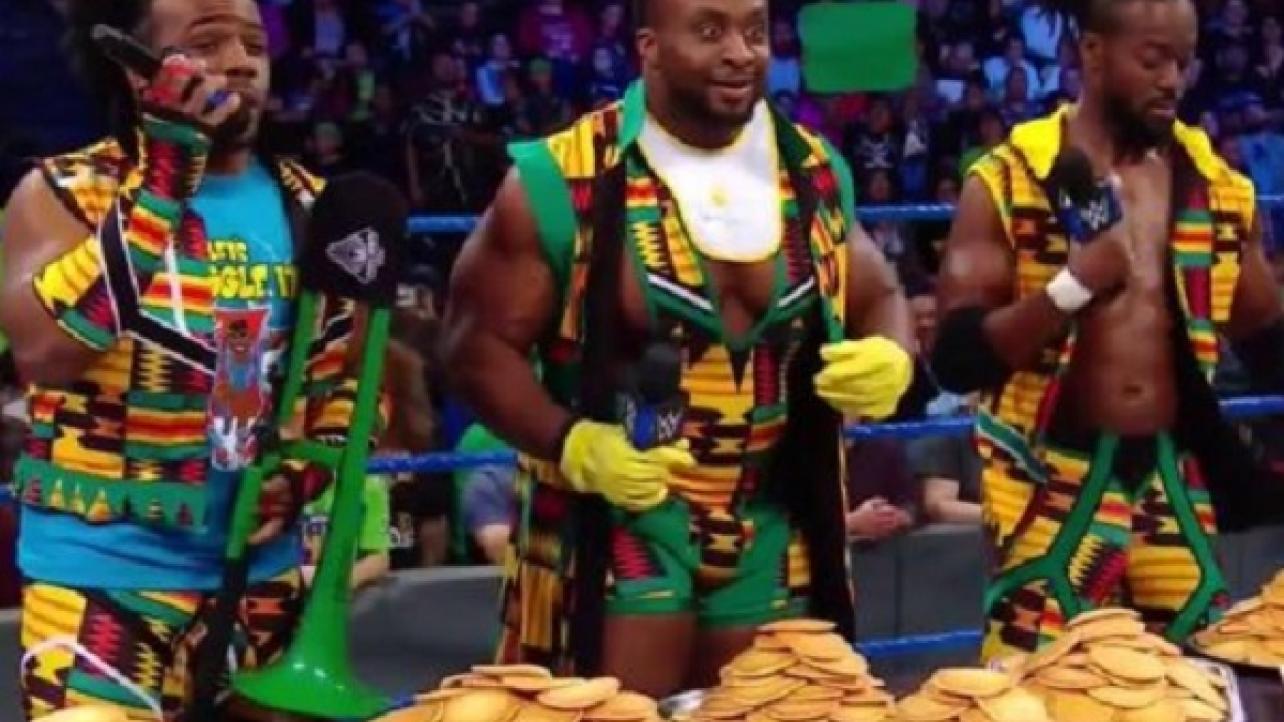 Big E. of The New Day recently appeared as a guest on 107.7 The Bone out of San Francisco, California for an interview with Baby Huey and Bimbo Jimbo. Featured below are some of the highlights from the interview.

On The New Day’s merchandising power: “That was important to us, and something that we always want to be hands on, and we try to be very involved in the process when it comes to merch. A lot of times its stuff they’ll come to us with and we are like hey that’s a great idea, and then sometimes we’ll an idea that we really like and we go them. Us a couple years ago we were number 1 in the entire company for merch sales when we had the Booty-O’s shirt release. I think that really showed them that hey these guys can really move merch, and it allowed them to put some more trust in our hands. We just wanted something that was fun. A lot of times we would look around at the current landscape in terms of what was available from t-shirts, and a lot of it was very dark a lot of black shirts a lot of stuff that we thought looked very similar to the other designs. We wanted something that when you saw it at the stands in the arenas during intermission, and you went out to look at the shirts that we had a shirt that would pop. We wanted something that would catch your eye we wanted something that was colorful we wanted something that was fun, and that’s something that we’ve always tried to do. Even seeing stuff like the unicorn horn was something that I thought would be around for maybe 3-6 months, and then no longer be a thing, but the fact that we are still selling unicorn horns…I think it’s definitely been over 2 years now…Same thing with the cereal. The fact that we even have a cereal in wrestling is absurd, and I love it…It’s been really cool for us, and we just always wanted to be unique. We wanted to offer people an alternative…and we are so glad that so many people have gravitated towards it.”

On whether or not The New Day has more input regarding their merchandise than most other WWE Superstars: “Yeah, I would say so, and that is something that obviously took some time. The first shirt came out without us even seeing a design, or even having any input in it, and obviously, you want to be grateful for your first piece of merchandise. I think really things took off for us from an in-ring perspective, and from a merchandise perspective when they finally allowed us to have more of a voice. I would hope that more talent would get to the point where they trust them to be able to sit down with them and say hey this is what we are thinking…but unfortunately that doesn’t happen as often as it probably should, but we have been fortunate enough to be in that position. A lot of times we’ll have guys from the office come down and show us a bunch of designs and kind of what they’re thinking for the next few months and we’ll be able to say hey we like this we don’t like that. Tweak this, tweak that. That’s really helped us because we really believe if we like something that our fans will like it. We don’t always nail everything, but for the most part we feel like we have a good understanding of what people will gravitate towards.”

On the success The New Day has achieved surpassing what he thought was possible: “We were guys who were just trying to get booked when we first started as The New Day. We were just guys who were trying to resurrect our careers because we were all floundering, and then we decided to get together, and in many ways we were still floundering when The New Day first was a thing. So, for us to have done as much as we have has been incredible. We never would have imagined being in a long promo seg with The Rock where we go back and forth with him. I wouldn’t have imagined being able to host Wrestlemania, or having a wrestling cereal. A wrestling cereal? That’s absurd. A lot of things we were able to accomplish were things that we never imagined. We had a lot of faith in us as a trio, but we were just guys who were just trying to regularly get on TV, trying to be in angles that people enjoyed, and we are extremely grateful. I think having the down times, having the pot holes, having the difficulties has helped me and I think the three of us really enjoy the successes that much more.”

On The New Day’s chemistry with The Usos: “From a backstage perspective…you can see the rapport, you can see the chemistry that we have with those guys. There is a real friendship there, and a real brotherhood, and I have known those guys since I was signed…For us to gel so well I think we also see the business and the way matches should work in a very similar way. I think a lot of guys are too worried and too concerned about looking strong or getting their stuff in…To have a great match I think you really have to be selfless and understand that hey at this point in this match it’s not about me looking good it’s about what do we do to get the best reaction…In many ways I think of really great wrestling like jazz. The ability to feel, to improvise, that ability to kind of ride the rhythm and have an understanding of what kind of reaction we’ll get when we do this, or the timing the positioning all of that stuff…I think the Usos have a very similar perspective on what wrestling should be on how great tag team wrestling is done, and I can’t thank those guys enough for being the best dance partners imaginable.”

Check out the complete Big E. interview at 1077TheBone.com.