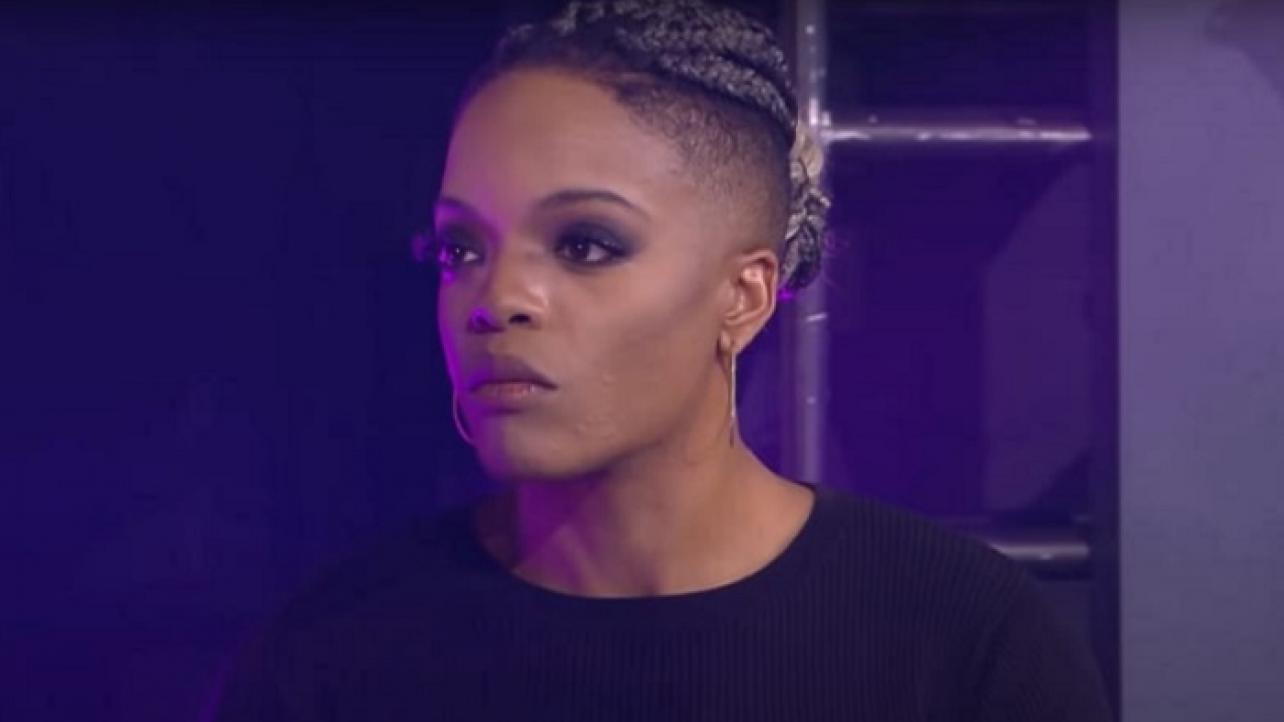 Big Swole On Lack Of Diversity In AEW, Reveals Final Conversation With Tony Khan Before Her Departure

Big Swole recently dropped the latest installment of her Call-In Show where she spoke at length about some hot-button topics regarding her AEW career.

During the program, the women’s wrestling star spoke about her final conversation with Tony Khan before she parted ways with AEW, how she and Kenny Omega were finally able to see eye-to-eye before she left, how the promotion is lacking diversity and women struggling to get time in the company.

On her final conversation with Tony Khan and how Kenny Omega were finally able to see eye to eye: “I explained to TK that I didn’t want to re-sign because my peace was being disrupted. If anybody knows me or knows myself, if anything is disrupting your peace, it’s time to let it go. It might be scared or be hard, but it’s time to let it go. When Kenny said that, it was the circle coming to an end because Kenny and I would bump heads sometimes throughout my time in AEW. To end it on that note felt good. It felt wonderful to end it at a place where, we didn’t see eye-to-eye, but we were there.”

On how it was hard for women to get time in AEW being one of the reasons her heart wasn’t in it anymore: “My heart just stopped being in it as the reason why I left AEW. I felt like there were a lot of things, and I told them in my exit interview, there are a lot of things that need to change. I know fans of the company don’t take criticism well sometimes, certain ones. Know this, this is somebody from the inside, the structure is a little off. It’s fine to be loose, but I like to have a little bit more structure. I felt like the women shouldn’t have gone through everything they went through just to get on TV or get time. You’re signed to this big company, you should get time. All these men are getting time, but the women weren’t getting anything or you’re not putting people on TV because more people are coming in. Okay, there are more people coming in, but you don’t have enough product for all of these people. Now you have all these people sitting around having two or three minute matches on Dark doesn’t keep me happy. Shoveling more money doesn’t keep a person happy. We’ve seen time and time again, especially in a place where there’s not enough space. There’s no writers in a sense. Not everyone is comfortable writing their own things. Closed mouths don’t get fed. That’s exactly what that environment is. If you are shy and don’t know how to write or are not creative, it’s not going to work unless they want it to work for you. That’s one of their biggest issues.”

On AEW having a lack of diversity: “Outside of [lack of structure] their BIGGEST issue, which is diversity. I do not beat around the bush when it comes to diversity and my people. There is no representation, truly, and when there is, it does not come across in the black community as genuine. At all. I don’t know why everybody is so afraid to accept it or say it, but it’s not a good look. What happens is, you have this wonderful company that treats people like family, but there is nobody that looks like me that is represented at the top and in the room with them. They are not helping to necessarily influence decisions, but to explain why certain slang and certain word shouldn’t be said. There is no one else who can explain our culture and experience except for us.”

On her daughter helping her realize that there was a lack of representation in AEW: “I knew something was up when my daughter, who loves watching wrestling, she would watch AEW all the time and seldomly watch WWE. She’s not a big fan unless dad [Cedric Alexander] was on TV, which stopped happening after they botched the Hurt Business. She would say, ‘Mommy, there is nobody that looks like me on AEW. There’s nobody that looks like daddy.’ Then she started watching WWE because she saw Bianca and Big E. She saw herself represented. If that wasn’t a ‘click.’ ‘You are absolutely right. I don’t have an explanation.’ It’s 2021. Why are people saying, ‘it’ll take three years for AEW to have a black champ’? This is a scripted sport. It should not take that long if you have been watching WWE for 50+ years and you know what not to do.”

On there being no bad blood between herself and Tony Khan: “I believe that the company is making better strides than before, but a couple of things need to be fixed. You have to be able to call people out because not everything is perfect. I hope they listen to this with an open heart and not just, ‘Ah, she’s just saying this because of XYZ.’ I genuinely want them to succeed. I love this art form. I love wrestling and I want it to succeed and I want the people in it to succeed if they are genuine people. I want WWE to succeed. I want wrestling to flourish and I don’t want it to be a long-forgotten, Tartarian sport where ‘in the old days, we used to wrestle,’ and it’s folklore. I want nothing but the best, but I also want the change and application to happen. With promises you made to be diverse, I want to see that. Not just with black people. I would love to see a Latino or Hispanic or more Asians. I feel like Asians and Indians do not get the love. They just don’t. It’s such a big gap. I hate the fact that I turn on the TV and it’s the same stuff over and over again. Hopefully, they get the message. Me leaving, honestly, was not bad. There is no bad blood between TK and I. I just don’t like my peace being disrupted. I didn’t like certain things and other things that I will take to my grave. The diversity. That’s what matters.”

Check out the complete interview at CallIn.com. H/T to Fightful for transcribing the above quotes.

Big Swole On Lack Of Diversity In AEW, Reveals Final Conversation With Tony Khan Before Her Departure