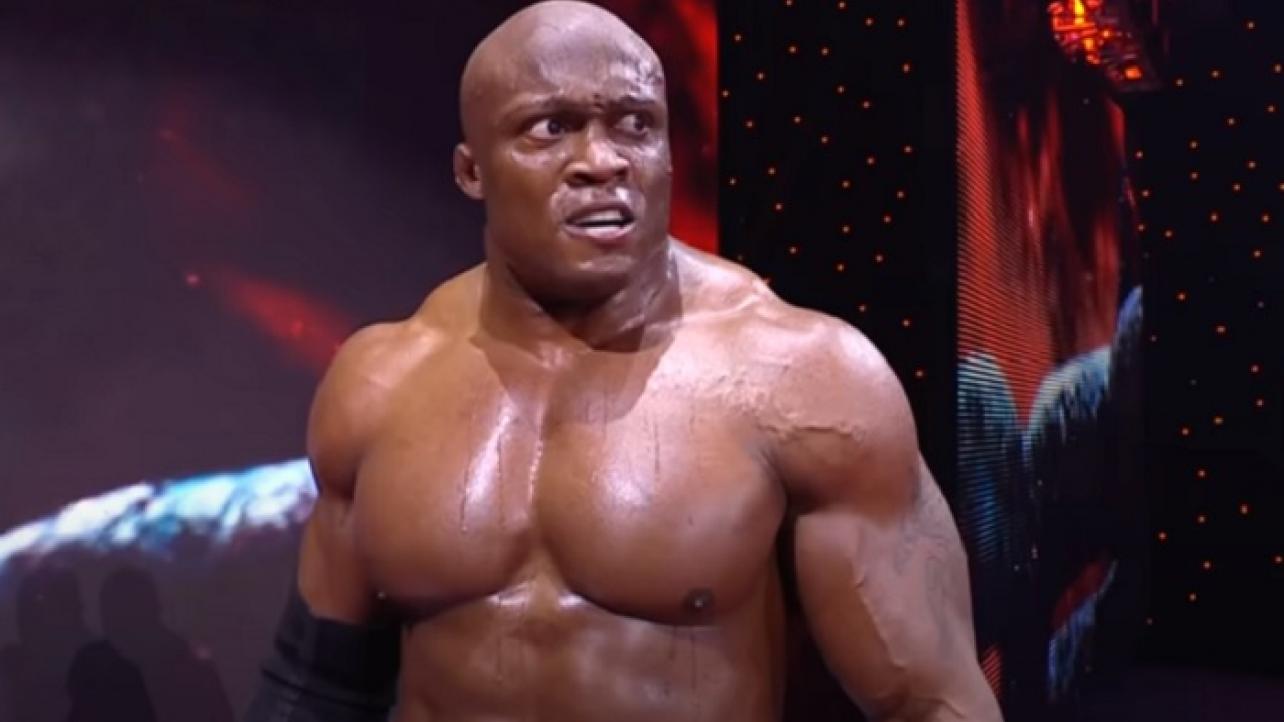 Bobby Lashley continues to make the media rounds ahead of his heavily-advertised WWE Championship showdown against The Miz at tonight’s WWE Monday Night Raw show.

During a recent interview with Graham Martinez of Bleacher Report, The Hurt Business member and WWE veteran spoke about him checking all the boxes necessary to be a legitimate WWE Champion, the help his runs in IMPACT Wrestling from 2009-2010 and 2014-2018 had on his career, being ready for the top spot in WWE and how much longer he sees himself in the ring.

Featured below are some of the highlights from the new Bobby Lashley interview.

On checking all of the boxes necessary to be a WWE Champion: “Ultimately, with the support, I think a lot of people know that I have paid my dues, and when you talk about a WWE champion and everything you put in there, I think I check all the boxes,” Lashley said with confidence. “Can you send this guy around the world and have him represent your company in a very professional manner? If you watch Raw, we come in looking clean. The suits I throw together and the way that I walk—we’re trying to steal the show without even wrestling.

“Even what I bring to the table: a military background, I graduated college with honors, single father doing my thing and still being able to train and fight. Every aspect of a champion. I check every one of those boxes, and I think everyone understands that. Even though I walk around and do bad things, people know I’m the man, and I have the opportunity to do some big things in this company.”

On the help he got from his runs in IMPACT Wrestling from 2009-2010 and 2014-2018: “I think [that Impact run] helped out tremendously because once you come into WWE and they say you’re going to be a champion, there’s going to be some uncertainties and insecurities,” Lashley said about his Impact run. “‘Am I able to carry that ball? Am I able to do it? Am I able to have those big matches with everyone?’ Because that’s what you need to do as a champion, and when I was in Impact, I had those opportunities.”

On having the confidence at this point in his career to handle a run on top in WWE: “There’s no question in my mind whether I should be on top or not. Some people already know it. You see Roman [Reigns] walk out there as the head of the table. He can’t even look down his chin is so high up. He has that confidence because he’s been in those matches with The Undertaker and Brock and all these different people. Same with Drew. Drew’s the same way. Drew can’t even see people that are under 6’5″ because he’s so high up right now, and he knows what he’s capable of doing. Not everybody has that.”

On how much longer he sees his pro wrestling career going: “I know with my career that’s it’s not going to be a thing where I have 10, 15, 20 more years,” Lashley said. “Some of these guys do, so mine is kind of a sprint right now. I don’t mind that. I don’t mind ramping it up a little bit because, like I said, I don’t have 10 to 15 more years. I have a few more years left. There’s a lot of goals I want to accomplish, so I have to go hard. My body’s been able to take the abuse I’ve given it, and I knew I could keep going, so I knew it was my time.”

Check out the complete interview at BleacherReport.com, and make sure to join us here at eWrestling.com this evening for live WWE Monday Night Raw results coverage, featuring Bobby Lashley vs. The Miz for the WWE Championship.