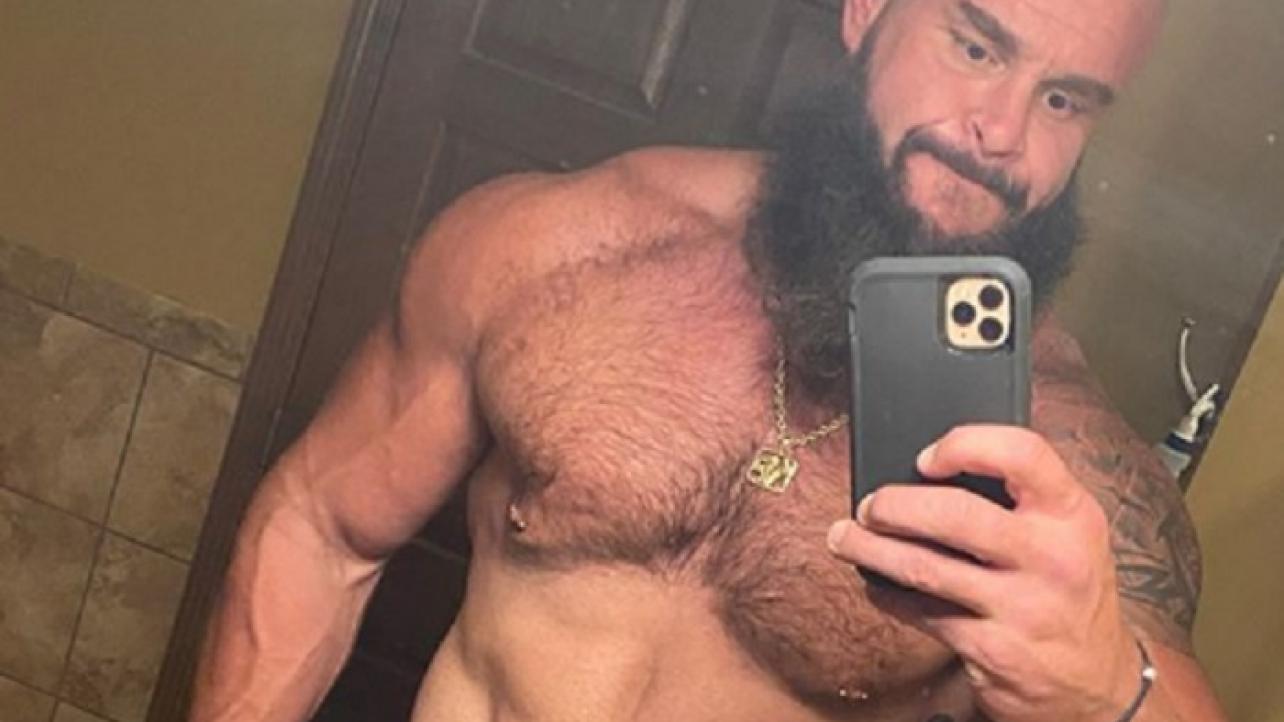 Braun Strowman Shows Off Drastic Weight-Loss (Photos), Reacts To Being “Plan B” For WrestleMania

Braun Strowman recently spoke with Justin Barrasso of Sports Illustrated for an interview discussing his drastic weight-loss and the overall physical transformation his body has undergone.

During the discussion, “The Monster Among Men” spoke at length about his weight loss and how his body transformation is not yet complete. He also talks about his new goals after being moved to the WWE Raw roster during this year’s WWE Draft, how Big Show is his “wrestling dad” and Undertaker is his “wrestling grandpa,” his thoughts on being WWE’s “Plan B” for WrestleMania, the upcoming WWE Survivor Series 2020 pay-per-view on November 22 and more.

Featured below are some of the highlights of the new Sports Illustrated interview with Braun Strowman.

On his recent weight-loss: “I want my body transformation to give hope to people. I challenge everyone out there to start by setting little goals for yourself, and then achieving them. After a while, those turn into big goals.”

On his body transformation not being complete yet: “In the morning, I’m bouncing around 335 pounds. I’m drinking two gallons of water a day, and so I usually put on another 10–15 pounds by the end of each day. My goal is to stay at this weight and continue to step everything up, and then I am going to step on a bodybuilding stage. I want to prove to the whole world that when you put your mind to something, and you don’t give up on yourself, the world isn’t going to give up on you.”

On his goals now that he is part of the WWE Raw roster: “The third hour of Raw sometimes falls off with ratings, so I pitched an idea to bring ‘The Monster Among Men’ to Raw Underground in the third hour. It’s so easy now to watch parts of the show on social media after it happens, but my goal is to get people to watch our live product. That’s a huge factor why I went to Raw, which is where I first made a name for myself. For me, being a WWE superstar is like a candlelight, and there is so much I want to accomplish before it burns out. So I’m bringing my absolute best to Raw. This is a big time for me, and it’s a chance for me to make a mark and win that one world title that has eluded me.”

On Big Show and Undertaker: “I always say that Big Show is my wrestling dad, and I know Undertaker won’t like this, but ’Taker is my wrestling grandpa. It’s unfathomable how much ’Taker has shared with me, and it makes me think of when I first started on Raw.”

On working with the Brothers of Destruction — Undertaker and Kane — during a WWE Mexico tour a few years ago: “We do a double shot during a tour in Mexico, and the very first night, it’s me and Harper [Mr. Brodie Lee] against the Brothers of Destruction in front of 17,000 people. We’re sharing the ring with icons, and I was so nervous that the hair on my arms stood up. We asked before the match how it was going to go, and they said they’d talk to us later. The whole night goes by, we never talk. Ten minutes before the match, Taker goes, ‘We’ll talk later.’ At this point, I don’t know anything. I’m just terrified. It was so special to be in the ring when the Undertaker’s music played, and seeing him walk to the ring, that’s a moment I’ll never forget. I remember being in such awe. Then we had the match, and thanks to ’Taker and Kane, we tore the house down. In the back, it was one of the most satisfying feelings, knowing we did what we were supposed to do for that crowd. That’s the responsibility we have in WWE, and that’s why I don’t get too involved with booking or creative. I just want to do the best I possibly can for WWE.”

On his WWE Universal Championship run: “I knew I’d have to eventually drop it, so my goal was making the most of the time that I had it. It started as a result of some last-minute changes that forced me into that role, but I was ready for it. I worked very hard to make the most of the opportunity I was given, and I was lucky to work with the people I did that stepped up during my title run.”

On being WWE’s “Plan B” for WrestleMania 36: “A lot of people have asked me, ‘Does it bother you that you were Plan B at WrestleMania?’ No, it doesn’t bother me. I stepped up for WWE when they needed someone. It’s my job to do what they need me to do. There are never hard feelings about booking or anything like that. I do what I need to do in order to make this the best story possible. I want to be someone that is always dependable and can strap the company on my back. That’s through my wrestling, and I also want to do things that giants have never done before in the ring. As a giant, I want to show I can be articulate and passionate about what I do.”

On WWE Survivor Series 2020 later this month on November 22: “Survivor Series, that’s my element. More bodies in the ring to chuck around means I can do more damage. When you tell the monster it’s time to eat, he’s going to eat.”

On wanting to make history as a big-man worker in WWE: “I know what’s at stake. I am walking in the footsteps of greatness. There is a legacy of big men in WWE, like Andre the Giant, Undertaker, Big Show, Kane, Mark Henry. It’s a huge responsibility, and I’m honored to do it. That’s my responsibility and that’s my passion, and I want to leave a legacy of my own. That’s why I am in the shape I’m in, that’s why I am back on Raw. I want to be remembered as someone that people tuned in week after week to see wreak havoc. I am still grasping the fact that I have done something in this life that has caused people to care about me. For this poor little country boy that grew up with almost nothing, I never in a million years envisioned being in a position like I am now. I’m extremely grateful for it, and I want to share that inspiration right back with everyone watching.”

For those interested, you can check out before-and-after photos of Braun Strowman, which show just how drastic his recent weight loss / body transformation is, as well as video footage of him doing his new workout routine in the gym below.

Check out the complete Braun Strowman interview at SI.com.

Even though I forgot to check in with @dieseltay this am this is where we’re sitting!!!! Meal plan is coming along nicely holding good body weight and on no carbs before this was taken. #Sorry #GettingThere #FlabToFab #LetsGo #Jizzacked #BodyBuilding #Transformers #Transformation #Gym #LifeStyle #FatBoyAbs

Wow is all I can say!!! A fan put these two photos together the one on the left is me when I debuted on the main roster the one on the right is me 5 years later ( about three weeks ago I’m even leaner now ) . The craziest thing is there’s only a 30lb difference in the two. Life is yours to make what you want of it!!! I fall in love with the gym more and more everyday. It’s been the one true constant in my life for almost two decades. I’ve enjoyed the ups and down the gains and losses and everything in between. I healthier you is a happier you. Set goals and crush them. And never forget IF YOU DONT GIVE UP ON YOURSELF THE WORLD WONT GIVE UP ON YOU!!!! #transformation #transformationtuesday #Motivation #LetsFreakingGo #GoalDigger #Jizzacked #FatBoyAbs

Braun Strowman Shows Off Drastic Weight-Loss (Photos), Reacts To Being “Plan B” For WrestleMania