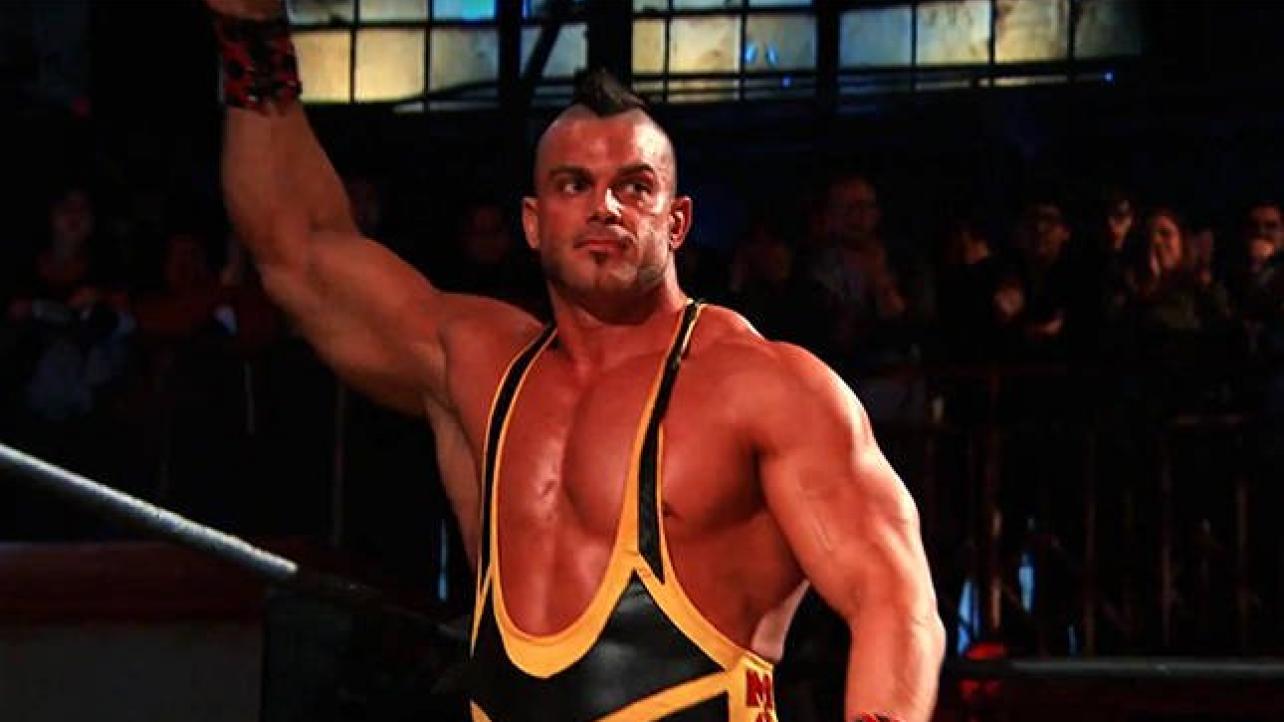 Brian Cage recently appeared as a guest on the Pancakes & Powerslams podcast for an in-depth interview with Chris Featherstone. Featured below are some of the highlights.

On whether his elimination from the 2013 TNA Gut Check was a work or a shoot: “I had no idea what was going to happen. Earlier in the year prior, in the Fall of 2012 I had a dark match, and Al Snow asked me if I would want to do ‘Gut Check?’ He said, here’s the deal, it’s a shoot, we don’t know if you are going to win or lose, you will be working with someone else on the roster. We want to sign you either way, and this is only going to help you get signed on faster. Win or lose, we are going to sign you, but this will help you get signed on faster. I said, okay, sure I will do it. Even then, all the top stars, still were mind blown that they ended up choosing the other guy; people like Jeff Hardy and Kurt Angle, nobody could believe it. Despite not knowing why I didn’t win, I ended up getting a lucrative offer from Lucha Underground and AAA, so I went there.”

On being in an X-Division qualifying match against Sanada and Crazzy Steve: “I was curious why I was brought back. There were people that were within walking distance of being there, I’m flying out all the way from California, so I asked them why am I filling this spot? It gets even better; they said, ‘You know, most of management believes that they made the wrong decision and that you should have won Gut Check, and this is our way of making it up to you and giving you another opportunity.’ I asked if this was going to lead to doing business again together in the future? They looked at me and gave me a cheesy head nod that we will be in touch. Afterwards, it fell flat on its face. I believe it was during the SpikeTV deal situation.”

On negotiating a deal to work in both Lucha Underground and Impact Wrestling: “It was very easy. They [Impact] had been interested in quite a while, and Lucha Underground okayed it to loosen up the restrictions in our contract. In TNA, they wrote a contract to be approved by MGM and once they submitted it to me, I looked over it and was okay with it. I signed it and there it was. I get to have full control of my character, my Indy dates, and basically with Lucha, they run on a certain schedule, and Impact is great, and I get to do whatever Indy dates I choose to.”

On whether or not WWE has expressed any interest in him: “I haven’t talked to them at all. I was under a developmental deal in 2009, and then I got released. I had a groin injury, and was put into this squash match that lasted about three minutes. During the match, I was supposed to get spot where I was going to get a boot, but I couldn’t race to the boot because my groin was torn and so he threw the boot like 12 feet away, and you were wondering what he was doing. Despite having awesome matches with TJ Wilson, none of that mattered, it was only that spot where they felt that I didn’t want to do that spot, so I was really upset about it.

“I ended up on Tough Enough, and when we ended up in a town in Fresno, I met with John Laurinaitis and asked him how the match went, he said it went great. He said that let’s just get through WrestleMania because there was a month left until WrestleMania, and I was okay with that. I thought to myself why he would lie to me. Why would he bring me down, so I was confident about it. WrestleMania came and went but I never heard back from them. I called him and he said to me, ‘Never mind, we are going to release you.’ I asked what he meant by that and he said that they are no longer interested in me. I was so pissed. I said that it was okay, thank you for responding and doing business with him. Through all the ups and downs from being signed, to being released, to Tough Enough, I said, enough of this. I don’t care about that anymore. I don’t care if I don’t go back now. My life is substantially better, both personally and professionally after my release.

“I had been recently in talks with WWE and they said that there were these trials coming up and whether I was available, then they changed their minds saying that they couldn’t bring me in for those upcoming tryouts, they would try again for the next one, and so on and so forth. That was the way it went through, about a year and change. Finally, when they were going to bring me in for a tryout I said okay. After I booked my flight and everything, I thought about it and the next day I said, never mind, I don’t want to do it anymore. They said, what do I mean I don’t want to do it? I responded by saying that I had signed with Impact Wrestling, Lucha Underground, AAA. I just didn’t want to go on that weekend that they were offering so I said that I am not interested at this time. It just felt really good to say that.

“They asked if I wanted to come through for the next tryouts and I said that we will see what would happen. Since then, I haven’t been to a tryout since. Am I willing to go back? I’m not begging to go back, but it would have to be where the opportunity would be perfect for me to go back. Right now, my life is great, my life is awesome, and there is no need for me to go back. I wouldn’t say that I would never go back, but if it doesn’t ever end up happening, I am okay with that.”

Check out the complete Brian Cage interview at SoundCloud.com.