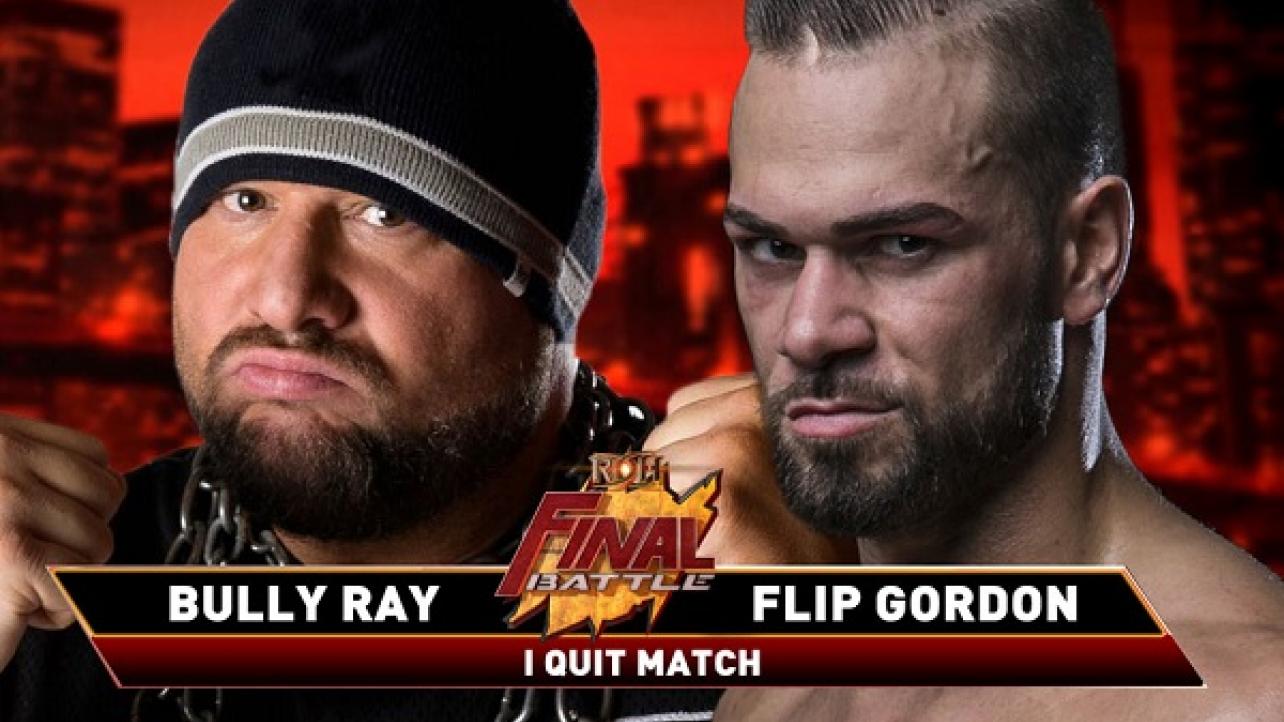 An “I Quit” match has been added to the upcoming ROH: Final Battle 2018 pay-per-view.

Bully Ray will meet Flip Gordon in an “I Quit” match at the Ring Of Honor PPV at the Hammerstein Ballroom in New York City on December 14th.

Will Flip Or Bully Say I Quit At Final Battle?

Ring of Honor’s seminal event, Final Battle, emanates from Manhattan Center’s Hammerstein Ballroom on Friday, December 14. Final Battle is ROH’s biggest card of the year and has been the site of some of ROH’s most memorable matches and this year will be no exception!

For most wrestlers, a year like Flip Gordon’s 2018 would be seen as a career high mark or even career making. Gordon won championship opportunities, picked up wins against top flight competition like Silas Young, Marty Scurll, Dalton Castle, and Jay Briscoe en route to winning the first-ever Sea of Honor Tournament to earn a World Championship match, and even competed in his first-ever Best of Super Juniors Tournament.

And perhaps the most impressive part of all those accomplishments has been his ability to do so while being attacked, ambushed, and bullied at every turn by Bully Ray. But Gordon has a chance to get the ultimate revenge, a chance to make Bully say I Quit at Final Battle!

At Supercard of Honor in April, Bully Ray threatened to shut the entire event down, the largest crowd in ROH history by holding Cheeseburger in a piledriver position, a move banned in Louisiana by the State Athletic Commission. It was Flip Gordon who ran to ‘Burger’s aid and was able to resolve the situation, albeit temporarily, but drew the ire of Bully Ray.

Bully and Flip faced one another at Best in the World after Bully spent weeks attacking and berating Flip. Flip came out of the gate with a full head of steam and looked like he would beat Bully Ray before Bully Ray got himself disqualified.

The violence turned malicious as Bully began attacking Gordon more, leading to a Tables Match at Death Before Dishonor. Gordon saw his partner Colt Cabana eliminated early but he came back and put both Bully Ray and Bully’s partner Silas Young through tables. Unfortunately, the referee did not see Young go through a table and Young and Bully won the match.

In a Pick Your Poison match, Gordon’s pick, Sandman, lost to Silas Young, allowing Bully Ray to do whatever he wanted to Gordon and he chose to cane and then low blow Gordon. After enduring the punishment, Gordon will finally get another opportunity to face Bully in the ring. And the winner must make the loser say I Quit!

Gordon, the now-retired Army National Guardsman, has never given up on anything in his life and has never backed down from a Bully. He will step face-to-face with the native New Yorker Bully Ray at ROH’s seminal event, Final Battle!

Will Gordon finally get his revenge? Or has Bully been right all along about the mettle of millennials like Flip Gordon? Find out LIVE as very limited tickets remain to join us in New York City for Final Battle!

Watch Final Battle LIVE on pay-per-view or stream FREE as an HonorClub VIP member or 50% off with an HonorClub Standard membership through the ROH App and ROHHonorClub.com!