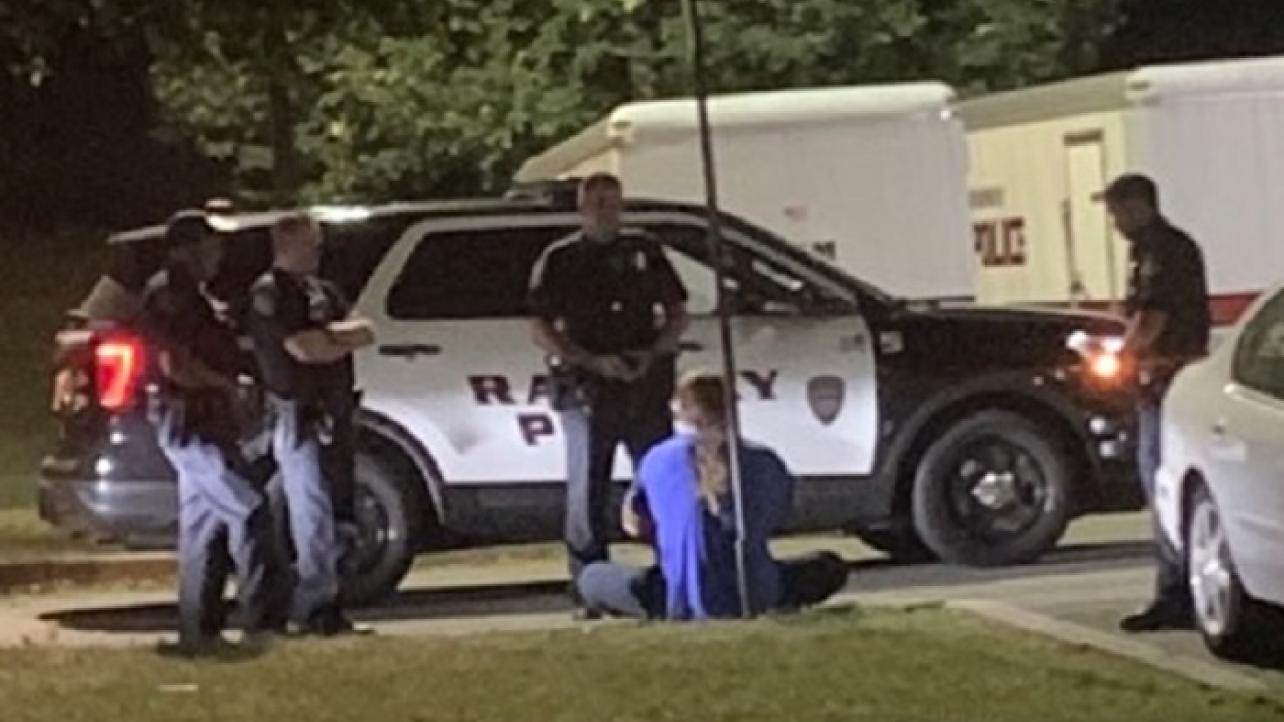 A story too wild to believe went down this weekend involving Big Cass and an ugly incident that scarred what was supposed to be a special event for WrestlePro owner and WWE producer Pat Buck.

Mike Johnson of (@MikePWInsider) PWInsider.com spoke with a number of sources and put together the article everyone is writing their stories from.

Check it out in full below, along with a photo of the police dealing with Big Cass after everything went down.

(Yes, the story gets crazy!)

A backstage incident with former WWE star Big Cass marred last night’s WrestlePro farewell for owner Pat Buck, who was officially wrestling his last match for the promotion after signing on with World Wrestling Entertaining as a Producer.

PWInsider has confirmed with multiple sources that were present that Cass, who was booked as an unadvertised surprise to appear in a battle royal, was acting “aggressive and erratic” backstage over the course of the evening, leading to several incidents and finally, his expulsion from the Rahway Rec Center in Rahway, NJ.

At one point, Cass confronted AEW star Joey Janela in a threatening manner, looking for a physical confrontation, apparently stemming from Janela’s run-in several months back with Enzo Amore at a Blink 182 concert in New Jersey (Watch Video Here).

One source believed Cass slapped Janela, but we were not able to confirm that. The irony over the situation, we are told, is that Cass and Janela had been in the same locker room the night before for Northeast Wrestling and there had been zero issues at all.

Cass was approached by WrestlePro’s Kevin Matthews, who defused the situation for the moment.

Cass continued to be loud and belligerent towards Janela to the point that Dan Maff warned WrestlePro that if Cass wasn’t calmed down, he was going to have to step in and handle the situation himself. Maff is known for being an extreme professional backstage, so that he even intimated he was at the point he wanted to take care of the situation was a huge sign Cass was in the wrong.

WrestlePro later had Maff and Janela, who were wrestling on the show, moved to a private room so they could call their match without distraction and to keep Cass separated from them.

However, Cass’ behavior didn’t stop there as he, according to four different sources, made his way through the locker room accusing several of stealing a sweater he owned and began threatening that he was going to “take care” of the entire locker room, insinuating he was going to beat people up.

This continued until Cass ended up in a smaller backstage room with AEW stars SCU and Pat Buck, who were in the middle of putting together their main event match for the event. Cass began accusing everyone in the room of stealing his belongings and acting in a threatening manner, threatening to fight them. He then turned to Buck, who was sitting and said, “What are you going to do, tough guy?” and spit in Buck’s face.

Buck, with no recourse as he was backed against a wall, punched Cass and took him down with that one punch. Buck then grabbed Cass and controlled him on the floor as other wrestlers stormed in and pulled Cass out of the room. We are told that the second Cass was down on the floor, his entire demeanor changed as he went from aggressive and threatening to questioning why he was hit and asking what was going on.

Local police who were in the building (the Rahway police station is next door to the Rahway Rec Center so whenever there is a wrestling show, there are tons of on duty and off duty officers who stop by to visit) were asked by WrestlePro to escort Cass from the building. Cass was removed and Buck’s farewell went on as planned.

The consensus in the locker room that Cass was completely unprofessional, especially given the fact that he was being given a chance by the promotion to come work as he was trying to redeem himself in the business.

Some were so angry over the situation that there was a belief that had Cass remained in the locker room, there were wrestlers who were willing to physically throw him out (or worse) themselves but they were trying to be professional with someone who wasn’t being professional at all.

There was a lot of sympathy for Buck given what tonight meant to him personally and because he was placed in a situation where he had zero choice but to defend himself against someone much bigger that was disrespecting the locker room. Obviously, Cass won’t be booked again by the promotion.

PWInsider was later told by several fans that even after being ejected, Cass remained outside the venue after WrestlePro’s event ended and at one point, it appeared local police were searching his car.

Cass sat down on the sidewalk and according to three different fans we heard from (including one who sent the picture below), began loudly making remarks about himself to the point that concerned authorities called for an ambulance to take Cass to transport him to a local hospital.

Additionally, here is an update from wrestling journalist David Bixenspan (@davidbix) claiming that contrary to previous reports to the contrary, Cass was not arrested.

Contrary to rumors going around the wrestling business, Big Cass/CaZXL/William Morrissey has not been arrested stemming from the incident at the Wrestle Pro show tonight. Rahway Police say that while there was a confrontation of some kind, there were no arrests or even paperwork.