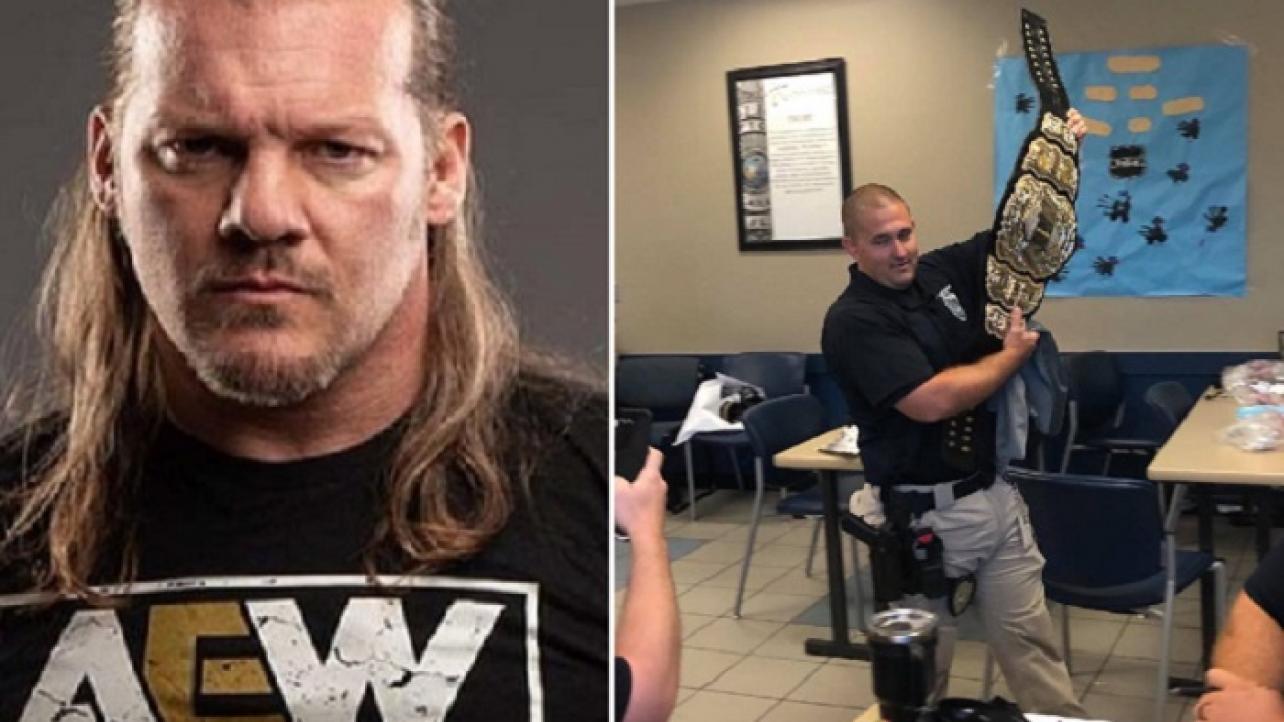 While it has been over six months since it happened back in September of 2019, Chris Jericho has finally decided to break his silence and share the full true story behind what he really thinks happened when the AEW World Heavyweight Championship title belt was stolen soon after it was introduced in All Elite Wrestling.

On a recent episode of his “Talk Is Jericho” podcast, All Elite Wrestling star Chris Jericho spoke at length to tell the complete story from start-to-finish regarding the AEW World Heavyweight Championship belt being stolen soon after he won it to become the first champion of the upstart promotion in late-2019.

Featured below are some of the highlights from the show, which feature Jericho telling all of the key points about the story from his perspective.

On the original AEW World Heavyweight Championship going missing: “So as we’re getting ready to leave, I say, ‘We’re really hungry, we want to go grab a bit. Let’s just go to steakhouse, let’s go to Outback. And so there was an Outback kind of near, and the guy says, ‘Let’s just go to Longhorn, it’s closer to where we need to go.’ Now I put it into my GPS, and it was a little bit closer but pretty much the same thing. ‘Outback, Longhorn, which one would you like to do?’ ‘Let’s just do Longhorn, whatever.’ So for the much-beleaguered people who are like, ‘Why did you go to Longhorn?’ That’s the reason why. Because the driver said, ‘Let’s go to Longhorn.’”

On thinking that the driver seemed to be acting weird while at Longhorn: “So we go to Longhorn and we have some food. And I notice about 15 or 20 minutes into sitting there — and it’s not a big restaurant, it’s not super-packed. And when you walk into the front door, we were sitting at a table that was in eyesight, in view of the front door. So the guy comes in, the driver. And he goes to the front door and he starts kind of walking around the restaurant. And we see him come in. We’re like, ‘Isn’t that our driver? What’s he doing?’ Like he’s kind of just wandering around … He kind of wanders over to our table about five minutes later and says ‘Hey, I just want to check your address. Is that a residence or an apartment?’ I’m like ‘It’s a residence, and what difference does it make? Just put it into your GPS.’ He says, ‘Oh, I just want to make sure, I’m just checking.’ And then he walks out, and I’m like, ‘That’s peculiar.’ Why would he walk in here, wander around for five minutes and then come over and ask me a completely irrelevant question to where we’re going, and then walk out? Huh. Almost like he was, I don’t know, maybe stalling inside the restaurant? Right?”

On first discovering that the title was officially missing: “So we’re hanging out, and we’re finish up our dinner, and we’re eating. And the guy comes in again, about 20 minutes after that. And he comes in and says ‘Uh, your title belt is missing.’ I said ‘What?’ He says ‘Your title belt, the championship belt is missing.’ Now I go — first of all, I’m thinking, ‘How do you know there’s a title belt in there?’ It’s in a bag. It’s not the job of the driver to go through people’s bags when they’re inside. I go, ‘What do you mean its missing?’ He goes ‘Yeah, well you put it in there and I came out and its gone.’ And I’m like, ‘Wh – What the f**k are you talking about? What is it — what? What are you talking about?’ So we go outside, and here’s the thing. It was my wife’s birthday that week, so I’d bought her a big bouquet of flowers and a vase. And she brought it with her to take home. And when we go out there, the vase that was in kind of the back of the truck is now in the back seat. It’s gone from the trunk area to the back seat. And I’m like, ‘Well how do you know the thing is gone?’ He says ‘Well, I just went out here to look at the back.’ And its obvious when he looked in the back that the flowers fell out onto the ground. He never mentioned the fact that the flowers fell onto the ground, he just mentioned the belt was gone.'”

On what he personally thought happened with the title: “I started thinking, ‘Okay. We get into the car.’ And the guy may be some kind of a trafficking guy. Maybe they just run some kind of racket where they steal things out of the backs of limos. And I’m thinking the guy said to whoever his contact was, ‘Meet me in the parking lot of Longhorn, I’ll leave the car. I’ll walk inside, you go in the back and see what you can find.’ So that’s what I really think happened. So when the guy walked inside and killed time inside the Longhorn, I think that his partner pulled up, opened up the back of the limo, the flowers fell out. He panicked, grabbed the title belt. Which this other guy had already scouted because he knew it was a title belt, even though he had no reason to know it was a title belt because I never told him, and he never looked at it while I was around because I never took it out of the bag. So, I assume he saw this one overlying piece of luggage, looked in it, thought it was some kind of a fancy gold belt, called his friend to come steal it and that’s what happened. Of course, I can’t prove any of that but it seems about as logical as the rest of all this.”

Check out the complete episode of “Talk Is Jericho” with Chris Jericho embedded below, or by visiting Omny.fm.

Ahh-ha! The former #LeChampion of #AllEliteWrestling and the leader of the #InnerCircle — #ChrisJericho — FINALLY reveals what he REALLY thinks happened when the #AEW title belt was STOLEN back in September of 2019! (#AEWDynamite, #ImWithAEW)