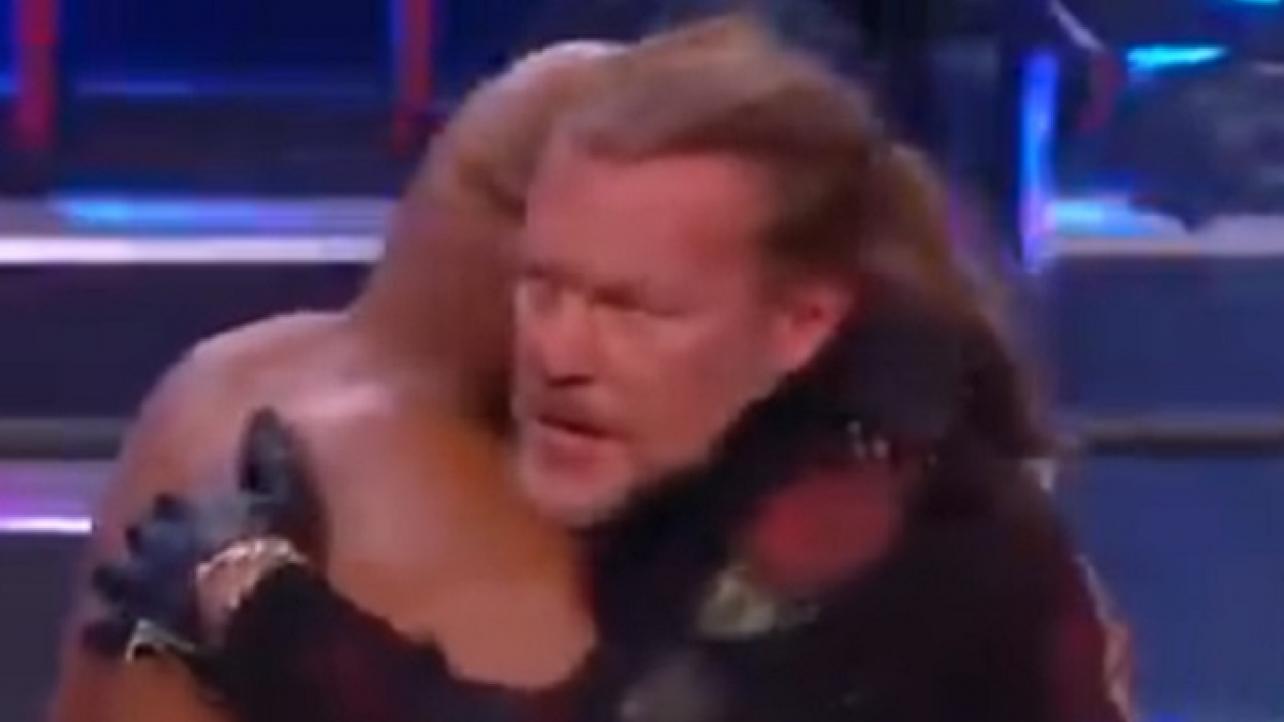 As promised, the leader of the Inner Circle made his return along with his faction on this week’s edition of AEW Dynamite on TNT from the Daily’s Place amphitheater in Jacksonville, Florida.

In what he vowed would be a huge revelation to The Pinnacle that we would not want to miss, “The Demo God” delivered, as he would address his “jerk-off friend” Maxwell Jacob Friedman, a.k.a. MJF, and inform him that the two factions would be squaring off in the first-ever Blood & Guts match on the May 5th episode of AEW Dynamite.

Later in the show, The Pinnacle — which consists of MJF, Wardlow, Shawn Spears, FTR and Tully Blanchard — locked all members of the Inner Circle in their locker room, except for one — the leader himself, Chris Jericho.

Jericho would be in the middle of a backstage interview segment with Alex Marvez when he would be ambushed with a blindside attack at the hands of MJF and The Pinnacle.

The heel faction would beat Jericho down and drag him out to the ring where they would continue to pummel him as we saw the camera flash shots of the Inner Circle trying to kick down the door they were locked behind as “Le Champion” kept getting the boots put to him by the various members of The Pinnacle.

Finally, some mysterious music played and when the big screen flashed the name “Iron” Mike Tyson, the boxing legend emerged through the entrance tunnel inside Daily’s Place. He would sprint down to the ring like a bat out of hell to make the save on behalf of his longtime enemy dating back to their respective days in WWE, beating down The Pinnacle and running them off.

Eventually, the Inner Circle broke the door down that they were locked behind and they joined Jericho and Tyson in the ring, watching on as the boxing and pro wrestling legend shook hands and embraced, burying the hatchet and finally putting an end to their their long-term issues.

As previously reported, it would later be announced that Chris Jericho, with Sammy Guevara in his corner, will be going one-on-one against FTR’s Dax Harwood, with Cash Wheeler in his corner, in a singles match scheduled for next week’s episode of AEW Dynamite on TNT — with “Iron” Mike Tyson serving as the special enforcer for the bout.

Watch some video highlights of Mike Tyson’s return on this week’s edition of AEW Dynamite via the clips featured in the tweets embedded below courtesy of the official Twitter feed of All Elite Wrestling.

Make sure to join us here at eWrestling.com next Wednesday night, April 14, 2021, for live AEW Dynamite results coverage including the Jericho vs. Harwood match featuring Mike Tyson as referee, and again on 5/5 for live coverage of the AEW Dynamite show featuring the first-ever Blood & Guts match pitting The Inner Circle vs. The Pinnacle.

The odds are not in @IAmJericho‘s favor.

Business has just picked up, the Boxing Legend #Iron @MikeTyson is on his way to the ring#AEWDynamite – Tune into @tntdrama now pic.twitter.com/uTCyZc9oQn