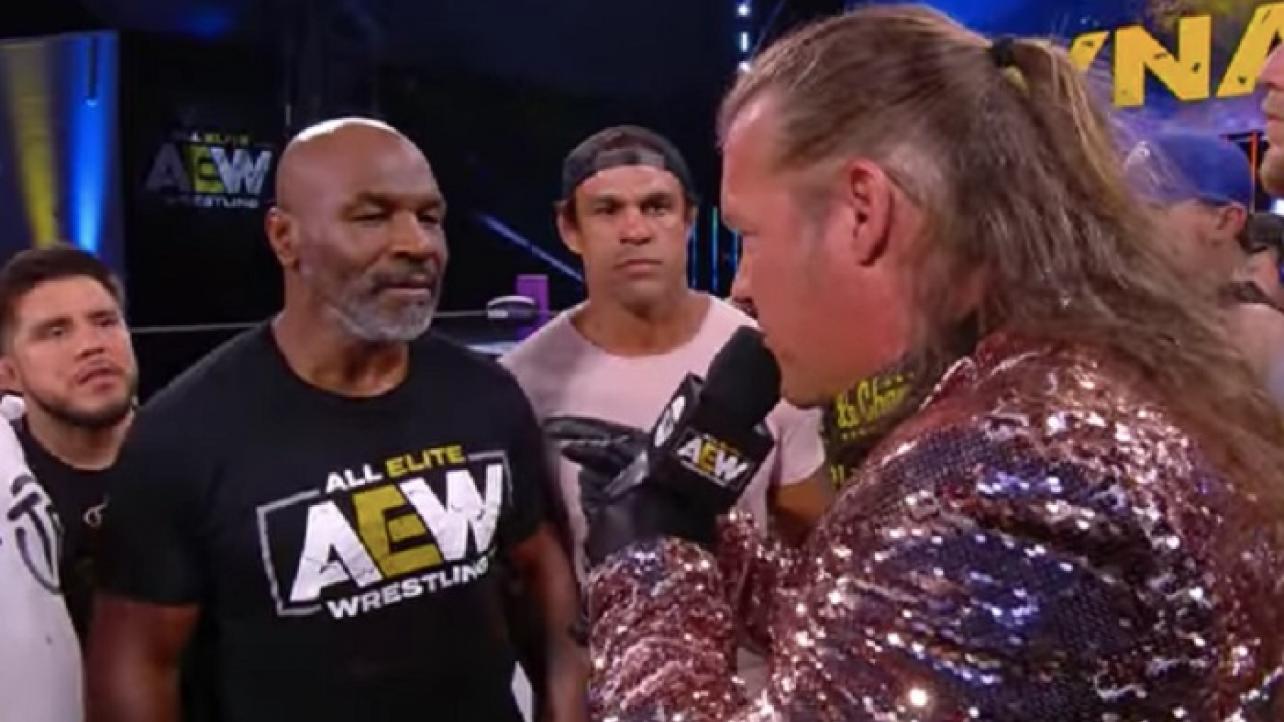 AEW superstar Chris Jericho recently spoke with ESPN to discuss the appearance on boxing legend Mike Tyson on last Wednesday’s episode of Dynamite. Highlights from the interview are below.

On his history with Tyson and not rehearsing their segments:

As far as I’m concerned, I’ve been working with Mike for 10 years. Probably seen each other half a dozen times and appeared on camera four or five of those. I know Mike. I think when the idea came for him to be involved with us at AEW, the natural pairing was with Chris Jericho. I know what to expect. A guy like him, he’s a firecracker, man. He’s a loose cannon as an entertainer, as a performer. You don’t give Mike Tyson a script. You don’t rehearse something with Mike Tyson. You just go out there. He’s gonna do whatever the f— he wants to do no matter what. And that’s cool. I have 30 years of being in the ring and I can guide that.

Grabbing headlines from major publications from the angle:

Absolutely a home run all across the board, especially for AEW as a company. We have done so much over the past year by just being in existence. Everybody that knows wrestling knows who we are. That’s why we have such a great fan base.But what we did last night was get headlines from every major sports publication saying Mike Tyson makes his mark in an AEW ring with Chris Jericho. All of that is company branding, where people go, “Wow, we’ve heard of this AEW, but we didn’t realize they were that big.” Or, “Who is this AEW?” Mike Tyson draws eyeballs. Chris Jericho draws eyeballs. But Tyson is gonna draw the type of coverage that I can’t get, because I’m not as mainstream as him.

Where he thinks the angle is going:

Obviously, the idea is to do something more. That’s the thought process, I think between both parties. What that is at this moment, we’re thinking and discussing. Look, Chris Jericho versus Mike Tyson in a wrestling match, in a street fight, in a boxing match, would be big. I’m not Mike Tyson. I’m not 1/1,000th of Mike Tyson, but I’ve been boxing for six years. I know how to box. I could win fights on my own against people of my skill level. So if that’s what he wants to do, that works too. Whatever he feels comfortable with, I can make it good. That’s what I do for a living. That’s what I’ve been doing for 30 years. But to me it’s the buildup and the angle and all the things we can do. That’s what wrestling is all about — the storyline. The match is the cherry on top. But it’s the build that’s really the most entertaining part, and the part that gets people really involved. So whatever it is that we decide to do as we move forward, it’ll be great. You have one of the most iconic boxers — and most iconic personalities — of all time against one of the greatest pro wrestlers and personalities of all time. It writes itself.

It’s a WWE angle? It’s a Chris Jericho angle. I was there. I don’t just wash away my entire 19-year history with the WWE. That’s ludicrous. Anybody criticizing that this was a WWE angle and we brought it over here — this is my life. It’s my story. Tyson knocked out Chris Jericho. He didn’t knock out Chris Jericho and The Rock and Hulk Hogan and Triple H and Kurt Angle. He knocked me out. That’s my story. It’s like if I write a song and it’s a huge hit and I released it on Sony records and then I signed with Warner Bros. and rerecorded the song. It’s my song.