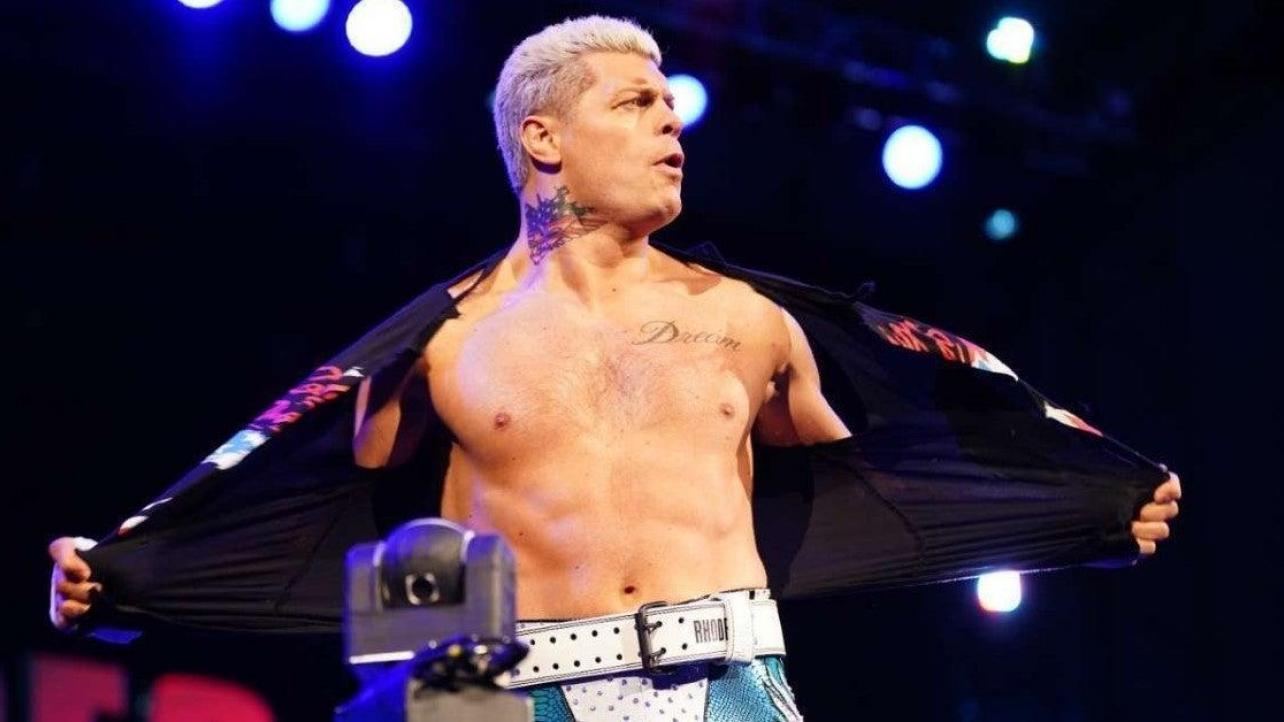 AEW announced this morning that top superstar and co-founder Cody Rhodes, along with his wife, CBO Brandi Rhodes, are moving on from the promotion. President Tony Khan issued a statement thanking the Rhodes family for their contributions in helping build up the AEW brand. See Khan’s statement below.

Cody and Brandi Rhodes were integral to the launch of All Elite Wrestling. Cody’s ability combined with his boldness and his passion for our industry and his love for community outreach helped AEW deliver on our mission to give fans what they needed for far too long – something new, innovative and lasting. Brandi helped us shape the AEW story, and I appreciate how hard she fought for us both in the ring and out of the ring, competing in the women’s division while advancing our efforts at inclusion and civic causes, including great partnerships with Kulture City and the American Heart Association.

I have immense respect and appreciation for Cody and Brandi, and I wish them both the best as they move on from AEW.

The American Nightmare has since issued his own statement thanking the AEW fanbase, as well as the talented roster and staff for their contributions to the wrestling business.

I have loved my time at AEW. Amazing locker room. Amazing fans. Amazing people. The “revolution” was indeed televised, and I’ve been incredibly lucky to be part of that.

First, I want to thank Tony Khan. He’s taken the baton and run with it, and it was an honor to work for him and to know him on a personal level. He’s a beautiful soul. Obviously need to thank my incredible wife and the mother of my baby girl, Brandi, for all of her love and support throughout this journey together and the amazing relationships she fostered with Kulture City and the American Heart Association. I also need to thank Nick and Matt Jackson (these two, whether they know it or not, took an undesired and not confident lir cub and gifted me the confidence to become a leader of the pack), Kenneth Omega, Chris Jericho, Chicken…we started the fire. I must thank Tim W/Keith M/Greg W and the amazing production crew who understood and captured the vision with such grace. I can’t name everybody, but thank you to Megha, Margaret, Harrington, Jeff Jones, Dana, Tony Schiavone, Bern, Raf, and the hardest worker in the game, QT Marshall, for propping me up and kicking me in the ass when I was running on fumes. I must thank all my kiddos… MJF, Jade, Sammy, Darby, Lee, Ricky, Tom, The Gunns, Brock, Velvet, Nyla, Aubrey, Turner, Vanilla, Solo, Spears, Julia, Anna, Will, Wardlow, Sonny, Fuego 1 and of course, -1. While we’re at it, give Jade the Codyvator! Also need to take a moment to thank the great partners at Warner Media including Brett, Sam and the rest of the team. I have so many milestones and beautiful memories of this renaissance…through sweat, blood, tears, literal fire, and all that…I left it all on the mat. Everything pales in comparison to the final contribution I was empowered to lead at the company, the community outreach team. In the most inward moments, your outward behavior and your ability to take fame/influence and do something of value for the communities you visit (whether the cameras are on or off) is the highest honor. I am confident Amanda Huber will lead the department with style. I’m so proud of my creations and contributions and the items I supported or collaborated on with such wonderful professionals.

Thank you, fans. Y’all did the work! Let’s live forever.

Rhodes was the first ever TNT champion in AEW, and held the title three times. He only challenged for the AEW world title one time, where his loss meant he could never challenge for the top prize again. Brandi also issued a statement on her personal social media. Check out all three below.