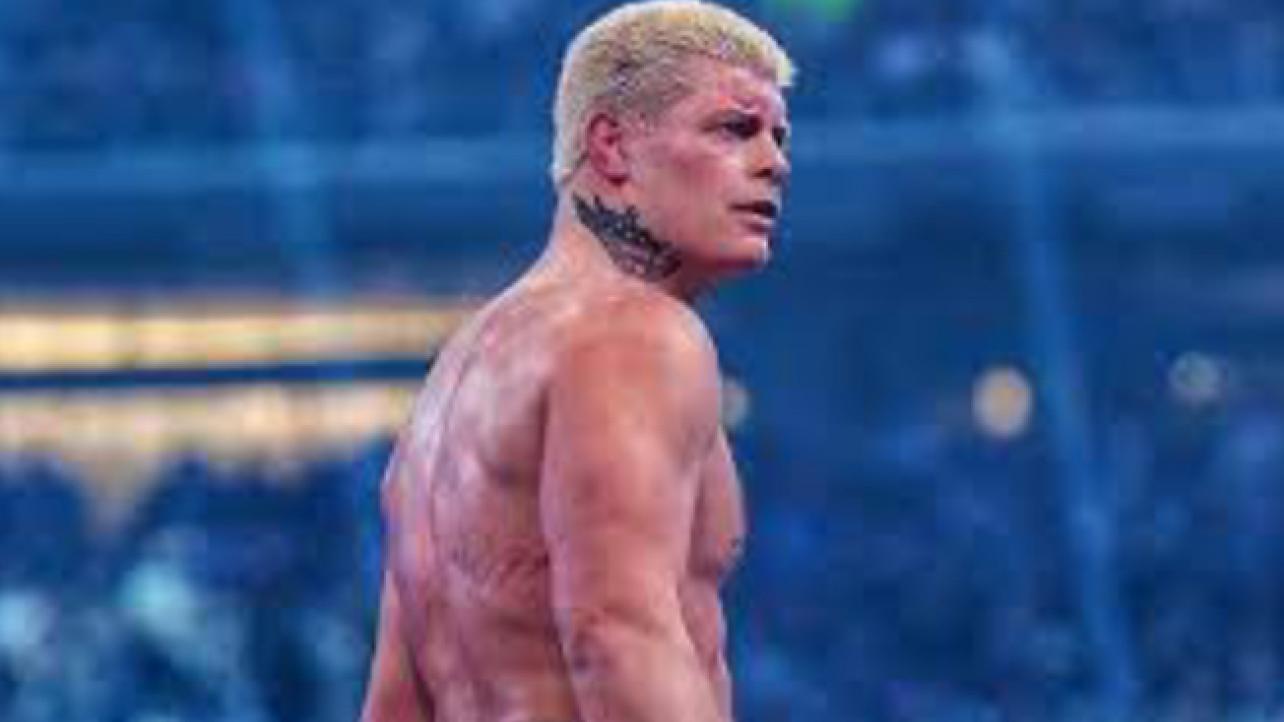 At WWE’s recently concluded WrestleMania 38 Night 1 Premium Live Event, “The American Nightmare” Cody Rhodes made his highly-anticipated return to the WWE, when he faced Seth “Freakin” Rollins in Singles action and came out of the match with a huge and hard-earned victory. Cody Rhodes then kicked-off RAW the Monday after WrestleMania 38 and addressed the WWE Universe, when he said it was an easy decision to return to the WWE and he is ready to bring the WWE Championship back to the Rhodes Family.

“The American Nightmare” Cody Rhodes made an appearance on SiriusXM’s Busted Open Radio to talk about how he doesn’t often watch his matches back, but he had to watch his match against Rollins at Night 1 of WrestleMania 38 because the way it was produced is so different from him being in AEW and now here in WWE as well as how special it was for Corey Graves to say what he did as that just shows what kind of a professional he is and the deep connection he had with Dusty Rhodes.

“I don’t often watch my matches back.” “I had to watch this one back. I was watching because the productions are so different from WWE to AEW. There are just different productions. I was just so curious about how it all looked, and I did not know that Corey Graves was going to say, ‘undesirable to undeniable’ but that just shows what kind of professional he is and he had a deep connection with Dusty on a very unique level. That was special. That of all things. That was so special that people understood.”

Cody Rhodes also talked about how he got the chance to meet his old friends in the WWE as well as new talent he has yet to meet before and how he was ready for some resentment because of the stuff he did at the time he was still in AEW, but that is not what he got.

“I got the chance after the match – I did want to swing by male talent.” “I went in there and got to see Kofi and I got to see Woods and meet some new people. I never really got to talk with Corbin as often. We got to talk a little bit that evening. I was really – I don’t know if excited is the word, as much as I felt this was my responsibility.”

“Now AEW a positive thing that exists in the industry, where now people are getting paid and there are options and stuff like that, but for some who has been a WWE ride or die, a WWE Superstar, there might be those who resent me to a degree over the trash that I spoke. I mean this is – I broke the throne, I poked fun at a lot of things, and that, I’m fully ready for there to be a bit of a cold layer of, maybe not resentment, maybe I won’t be the most popular guy. But that’s not the sense I got.”

Cody Rhodes then talked about how he was most excited to meet brand-new RAW Women’s Champion “The EST Of WWE” Bianca Belair and how he got to meet her after her match at WrestleMania.

“I tell you, the person I was most excited to meet was Bianca Belair.” “I was most excited to meet her, and I got to meet her when she had just come from tearing the joint down, and I was underneath the stage so I could hear it all. You’re always happy when you can hear a hot crowd and they had set up such a brilliant crowd and put us in a difficult position to follow.”

“I thought she was just a total queen when I met her, and to be able to be one of the first people to say congratulations, even though I’m brand new on the team, that was very nice and I’m a big fan having watched her last year what she did with Sasha [Banks]. Big fan.”

You can check out Cody Rhodes’ full comments at this link. H/T to Wrestling Inc. for transcribing the above quotes.