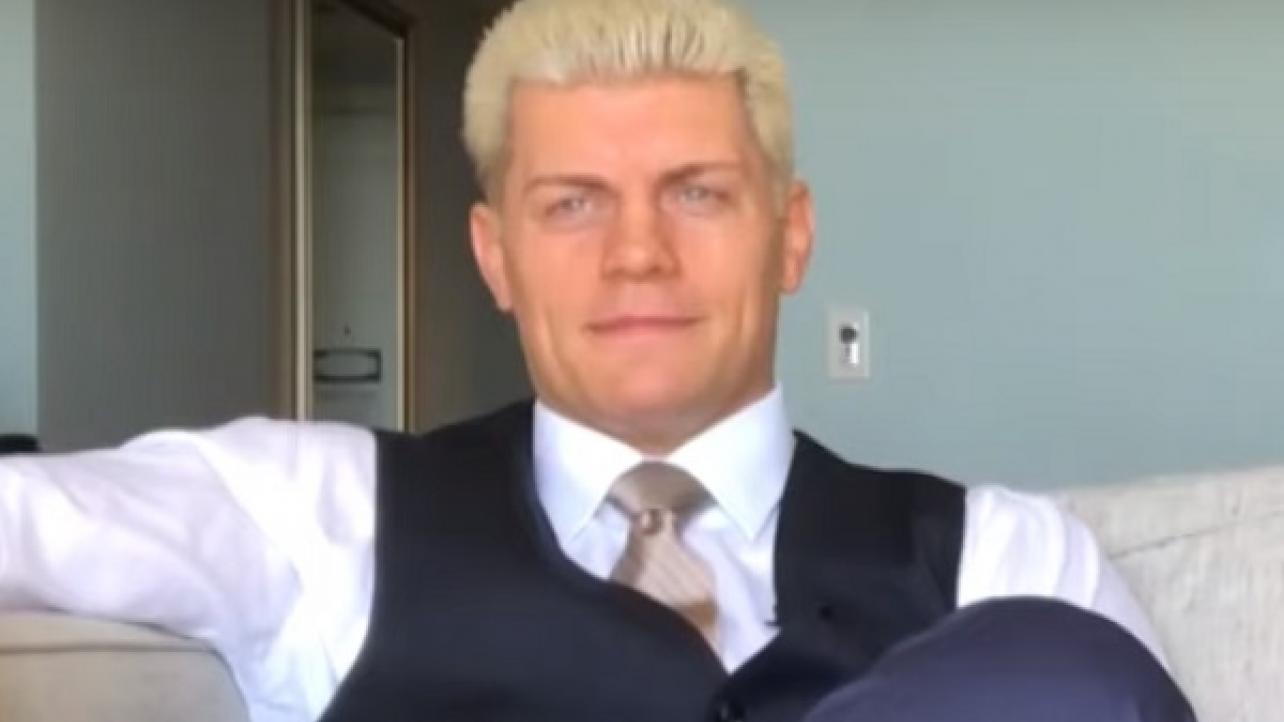 Cody Rhodes recently appeared as a guest on “The Chad Dukes vs. The World” show for an interview promoting the upcoming AEW All Out pay-per-view, as well as the launch of the new, live, weekly two-hour AEW On TNT television show.

During the interview, the AEW Executive Vice President (EVP) explained why the promotion chose the Capital One Arena in Washington, D.C. as the host venue for the inaugural episode of AEW On TNT.

He would go on to give an example.

“I’ll give you an example,” said Cody. “Rafael Morffi, who came from WWE and was there with me as our market rep, that’s the individual who can look all across the board, and who can strategically place us in the best market and service every market that we possibly can, and reflect that data that’s been reflected, and appease that, and all that math and all that science.”

He added, “We’ve built a really great team around us, and short answer, I’m a huge fan of American history. I’m the American frickin’ nightmare. It makes perfect sense that we’re in Washington, D.C., the nation’s capital. So that’s the short answer. The long answer is that we’ve got a lot of really wonderful professional people who said this is the spot you want to be for the first show.”

The AEW EVP, who will lace up his wrestling boots for a one-on-one showdown against Sammy Guevara at the AEW On TNT debut show on October 2nd, was also asked about receiving text messages from friends who are pro wrestlers for other pro wrestling promotions.

“Sure,” Cody said, when asked if he would talk about the subject. “And that is a really great question, and I can talk about it.”

Cody continued, “You’ve got to basically differentiate. The tricky thing is we’re friends. We are all brothers in arms, sisters in arms in this industry. We’re the ones who go out there and take the bumps. Nobody sitting in a corporate office is taking those same bumps, or on the road and in between the ropes.

“So there’s a camaraderie there and there’s a level of, we’re allowed to talk with anybody we want to talk to, as friends, but when it gets beyond friendly and it gets beyond personal, that’s an area where I’ve had to grow up, and Matt, Nick and Kenny have had to grow up. And that’s an area where we’ve had to, ‘Okay, well we can’t talk to you, cause you’re under contract.’ Or, ‘We can talk to you, but it will be at this date.’ And that’s not always easy for some of your friends. That’s not the easiest pill to swallow, when everybody just wants to kind of… you know, you’ve got to just separate and differentiate when you’re talking as friends and when you’re talking in business.”

Check out the complete Cody Rhodes interview below, or at Omny.fm.