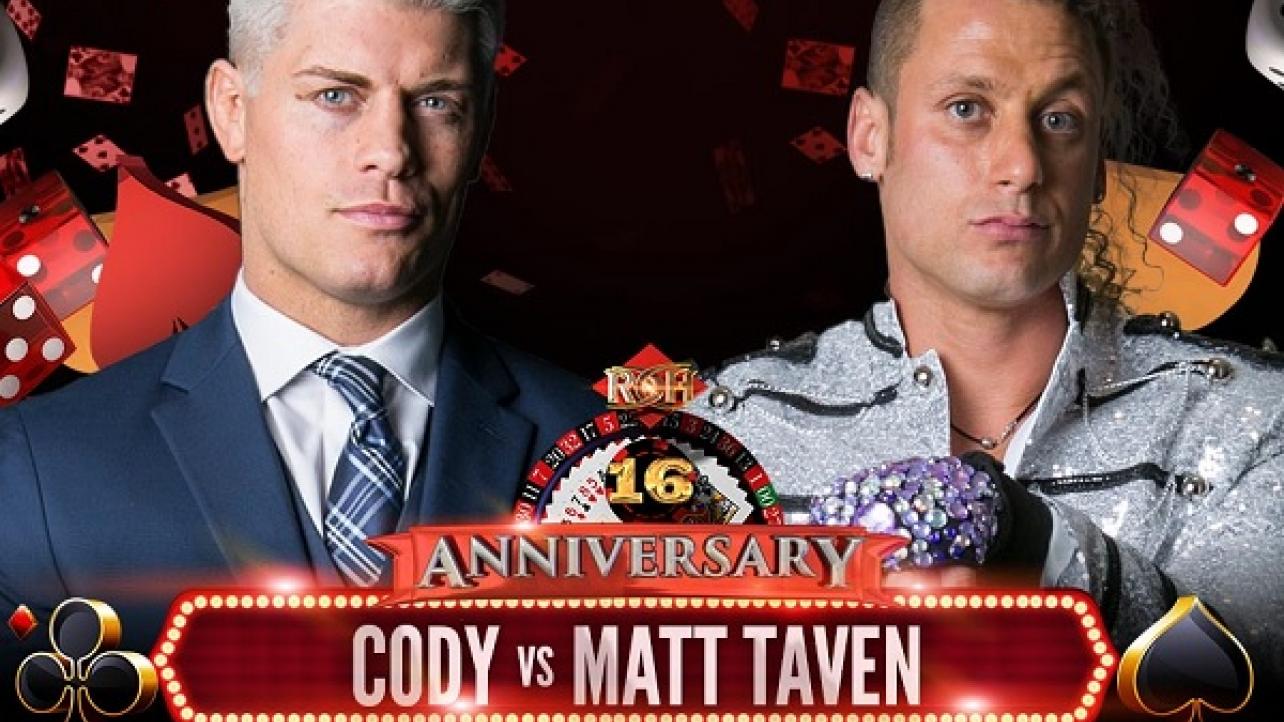 On Thursday afternoon, Ring Of Honor (ROH) announced a new match for their upcoming 16th anniversary event in March.

ROHWrestling.com issued the following announcement regarding the addition of Cody vs. Matt Taven to the 3/9 PPV:

When “The American Nightmare” Cody won the ROH World Championship at Best in the World, he became part of just the second-ever father/son duo to hold internationally recognized World Championships. His father, “The American Dream” Dusty Rhodes, used to speak glowingly of championship rings, their importance in sport recognizing the very best. Cody commemorated his World Championship win by commissioning The Ring of Honor, a ring to recognize an achievement of a lifetime, which many also interpreted as a tribute to his late father.

Knowing all that, that made the imagery of Matt Taven and his Kingdom standing tall over Cody, forcing his lips on the Ring of Honor following a low blow even more jarring.

But the low blows were not isolated incidents and these two will meet one-on-one on Pay Per View in a grudge match whose genesis seemingly was the minute Cody lost the ROH World Championship!

It was in Philadelphia where the former World Champion Cody promised to address the crowd for the first time since losing the ROH World Championship. But before the former Champion could begin to speak, he was confronted by Matt Taven. Taven, fresh off of victories over Jay Lethal, Will Ospreay, and more, stated his case that he should be in the World Title picture, the one championship that has eluded him in his quest to become the first ROH Grand Slam Champion.

The confrontation ended with Taven low-blowing Cody, sending a message that he was a player in the World Title picture!

For weeks, the Kingdom and Bullet Club, led by Taven and Cody respectively, have been battling tooth and nail, and the trio Taven, Vinny Marseglia, and TK O’Ryan defeated Cody, Adam Page, and “The Villain” Marty Scurll in the biggest shot of this rivalry, a week after Taven stole the Ring on television when Taven connected with the Ring of Honor as Cody charged into the corner.

While The Kingdom cries of conspiracy, Taven now has a pinfall, albeit by questionable means, over Cody, while Cody himself used a low blow to defeat Taven on television. But with recent developments in Sapporo, the Main Event of Supercard of Honor signed, and chaos swirling around Cody as Bullet Club seemingly becomes divided, Matt Taven seemingly has a mental advantage heading into 16th Anniversary! Can Taven ride the confusion surrounding Bullet Club to a victory in this grudge match or will Cody lift the cloud around him and pick up a giant victory as both men look to assert themselves firmly into the World Title hunt? Join us to find out!

It will be a celebration of 16 years of amazing Ring of Honor action on Friday March 9 when ROH Presents 16th Anniversary! Fans can watch the event LIVE on Pay Per View, the Fite.TV App, by becoming a HonorClub VIP member, or ordering as a HonorClub member with a discount! Don’t miss this celebration of the history of ROH with the hard-hitting, in-your-face action only ROH can deliver LIVE!