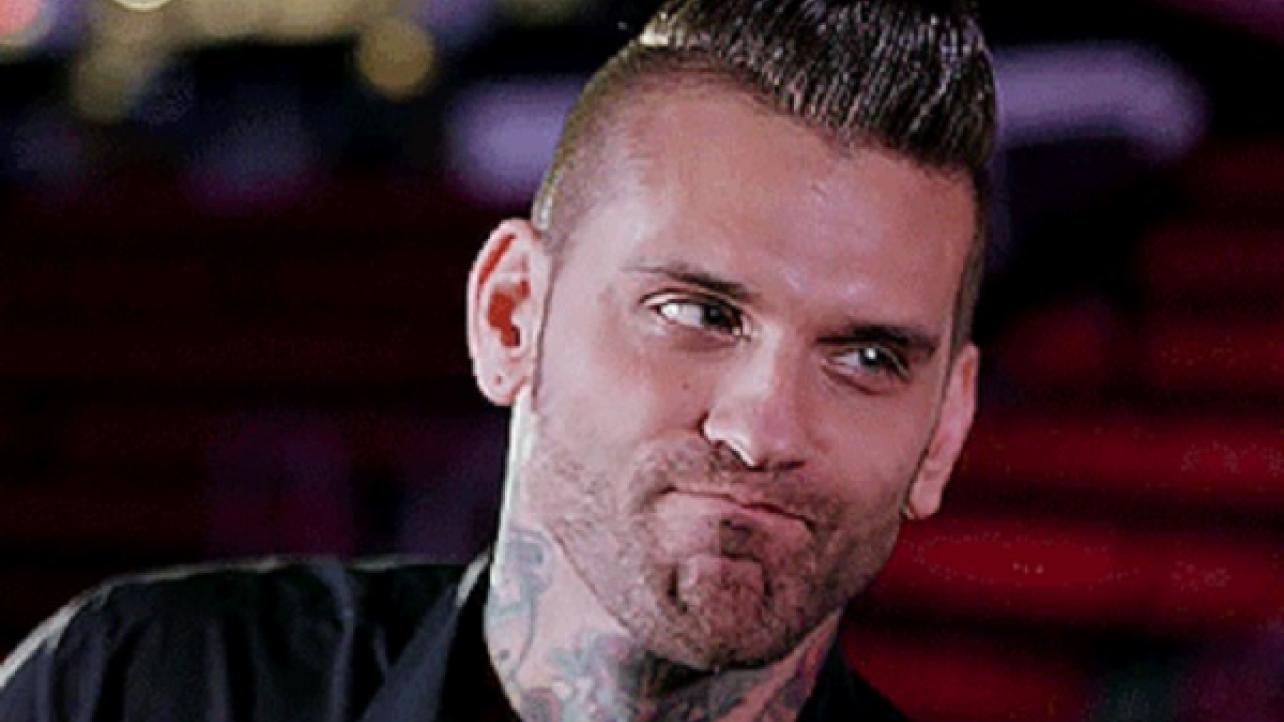 WWE announce team member Corey Graves recently appeared as a guest on the “Prime Time with Sean Mooney” podcast for an in-depth discussion. Featured below are some of the highlights from the interview.

On what it’s like to be live with Vince McMahon in his ear: “The first time he reprimanded me for anything, I was on camera. It’s different when you’re not on camera, you can kinda play it naturally and acknowledge it. But when you’re staring at the lights, and all of a sudden Vince is yelling at you in your ear, it’s like really hard to keep your composure and keep your train of thought, and I’m pretty sure when it happened, I just locked up in the middle of a sentence, because it was like ‘oh no, I’m dead! What’s happening?’ It just trumps everything that’s going on in the world.

“I think I’ve been doing it long enough now with him that he’s comfortable with me, and I think I have sorta earned his trust, and a lot of times he gives me plenty of rope to kind of work with, and do my own thing. I think he gets that I generally understand the story, even if I don’t know where we’re going with it, which I try not to know. So I think I’ve earned his trust to a point, but that doesn’t mean there aren’t still moments where I’ll say something and he’ll, you know, I can’t necessarily repeat what he says to me all the time, but it’s definitely an experience. It was definitely hard to get used to, but now I think I am as used to it as I will ever get.”

On paying his dues as part of the NXT Street Team: “Seth Rollins and I, that’s our common joke with each other, is Street Team. It was miserable. The worst was to be on the posters, and you’re rolling through a small town in the middle of Florida, you know, like a one stoplight town, and you’re out there with a staple gun, stapling posters of yourself to the phone poles, trying to avoid the police, because most of the towns had ordinances against that. All so you could have somebody to wrestle in front of. It’s August in Florida, so it’s 110 degrees outside, and you’re sweating. Somebody was driving, and someone’s in the back seat with the posters jumping out, it was like this guerrilla marketing thing. I always joke, I said ‘I think that’s the difference between our crew and anybody that comes out of the Performance Center now, they should have to do Street Team at least once in their life.”

On the early days of NXT: “We were still the best kept secret, and so the fans started kinda getting rumblings; ‘You check out this NXT stuff? There’s some pretty good guys!’ and I thought ‘Oh, the hardcores knew who Tyler Black was from Ring of Honor, and Jon Moxley and all those guys who were the big time independent names.’ FCW existed, but nobody had anywhere to watch it. And from our perspective, it was like ‘this is our time to shine, across the board’ It was maybe the most unified, united, I’ve ever seen a locker room, and sort of group of anybody in this business. We were all working toward a common goal, and it was like, we had Hunter and Dusty leading the charge, and everyone was behind it 1000%. It was like ‘alright, you don’t have to give us the ball anymore, we got our own ball, and we’re going to show you how to play.’

“There was obviously, there’s a lot of freedom to even NXT TV. We were still learning. We were learning about hitting time cues, and different things that we’d never really been exposed to. We had something that was ours, and at that point, I think the focus no longer even became ‘Hey, we’re gonna go to Raw and Smackdown’, it was ‘We’re making NXT. This is ours!’ All the way up through those first Takeover and Arrival and when those first started happening, I think it was so organic, because it was real to us. The fans were excited because they had something different. It wasn’t Raw and Smackdown. They weren’t seeing the same faces week after week after week, and it was still good. It was good wrestling. It was good storylines. Interesting characters, new characters you’ve never seen before. So the fans sorta latched onto it, and we were working just as hard as they wanted to watch it, because this was our baby. It was truly like a grassroots kind of feeling, that we made this thing, and we’re not gonna let it fail. I think the passion from the fans and the passion from the talent met in the middle, and created this perfect storm.”

Check out the complete episode of the “Prime Time with Sean Mooney” podcast featuring the Corey Graves interview below, or at .
Listen to “Corey Graves” on Spreaker.

The Rock Gets Married Again On Beautiful Island (Photos)

John Cena, Mauro Ranallo & Others On NXT To USA Network

WWE HOF’er: NXT To USA Was NOT Done To Compete w/ AEW