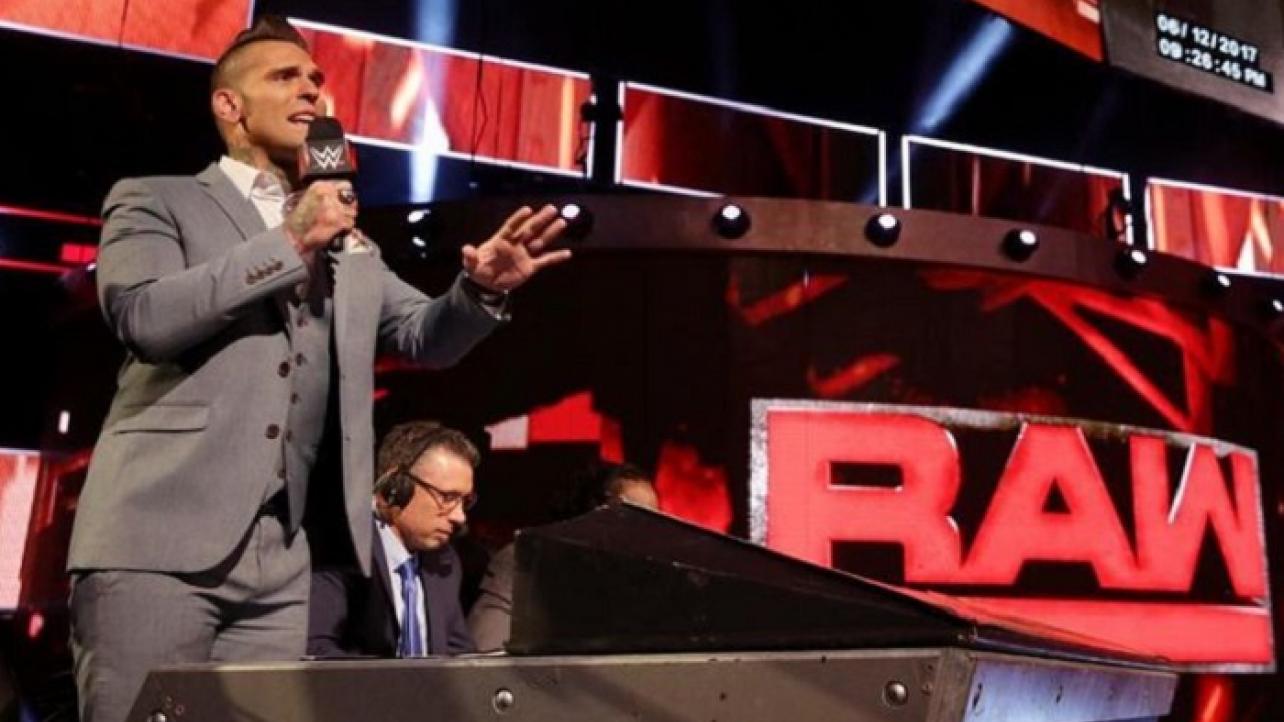 JP and Chad of The Two Man Power Trip Of Wrestling podcast sent along highlights of their recent interview with WWE broadcast team member “The Savior of Mis-Behavior” Corey Graves.

Graves appeared on the show to talk about his clothing line collaboration, “The Stay Down,” Collection with FATAL Clothing.

In this revealing interview, Graves holds nothing back about the current happenings in WWE, including the recent Executive Director additions to both RAW and SmackDown Live, as well as the comments made by Seth Rollins to the rest of the pro wrestling world about WWE’s stature as the top dogs in the industry.

Additionally, fans also get an emotional look into Graves’ retirement from the ring and how the break of a lifetime came from a simple conversation during WrestleMania 30 weekend with Michael Cole.

Featured below are some of the highlights, as well as a complete audio archive, of the Corey Graves interview on The Two Man Power Trip Of Wrestling podcast.

On WWE’s hiring of Eric Bischoff and Paul Heyman:

“I think everyone is pretty excited. Obviously there are some pretty well publicized changes within the company and honestly I don’t know much more than anyone that reads the internet knows. I kind of get the news around the same time that everybody else does (there’s a shocker for you) everyone thinks I am in on it. People get mad about storylines and send me mean tweets and I’m like, well I didn’t write it and only saw it when you did but there is definitely a little bit of an internal buzz and obviously they are external sources that is everyone is talking about. It’s in a weird way kind of re-invigorated the locker room and hopefully that is the starting of something cool that is going to permeate inside the entire company. I know that the boys and girls that bust their ass every night all around the world that they are fired up now and it is exciting to see and it’s obviously a small change and it is going to take time and take a lot of effort but hopefully yes, in a short answer it is the change of something and I don’t have any cool scoops to give you or any ideas of what those changes will be but I know that we’ve got the biggest collection of talent that we’ve ever had and some of the most incredible workers you’ll ever see and it is just a matter of turning a few things around and getting everybody back on the same page. I know it is kind of or sounds like I am giving you the PC answer that is is not for lack of wanting on any part. I think in a way the company has gotten so big and we’ve gotten so much content that it is easy for what you would think to be major issues to be lost as details and it can’t really fully be explained until you’ve seen the place from within but it’s all still the same. Nobody ever complains and says we aren’t going to try anymore or this doesn’t really matter and that’s never been the case but I think now there is sort of a microscope on us with all the changes in the business as a whole that is has kind of reinvigorated everybody and everyone is being very receptive to suggestions and again it is not going to change overnight but I think that I’ve been around this business for over half my life and there definitely is a buzz. I can’t put my finger on it and I can’t tell you exactly what it is but the atmosphere is different right now and I am hoping and have my fingers crossed that is is for the good of not only the company but for the business as a whole and the fans everywhere.”

On not knowing everything that is going to happen on television:

“A lot of that is as much my preference as it is not really an ordinance. It is not something they told me I can’t know things, I feel like it is more enjoyable for me and my ability to convey the emotion is better when I can be surprised or be unsure or not know what a finish is. Some people like to know every punch that is going to be thrown or every aspect of every match and I don’t like that and it’s just my personal preference and I’ve somehow managed after all the years to be a fan to a certain extent and I feel like that has lended itself to me being successful as a commentator. Obviously, I look at it with my own slant and my heavy bit of sarcasm but I don’t like to know. There is nothing more exciting to me to this day after being with WWE for however long I’ve been here than being surprised. I think all of us ultimately are fans as jaded or as pissed off as people can get we still put up with everything good, bad or indifferent because we are fans and we want the good stuff. In the event that something happens and something is shocking there is no better visceral feeling than going Holy Sh*t I didn’t know that was going to happen. I love that and I hope everyone feels that way.”

“We’ve all had it and I’m pretty sure they still do it when you are hired to NXT. We all go through a class with social media and media training and all of that. At the end of the day from Seth Rollins to everybody on the roster and myself included, producers we are all human beings at the end of the day. So when you get done with a show and you feel good about something you did and you log onto your Twitter to read if people liked this thing and it is just hours and hours of “this sucks”, “the company sucks”, “you should all be fired”, you are a human being at the end of the day. As much as we probably have a thicker skin than a lot of everyday human beings and if you work in a bank and every day you get hundreds of awful tweets of people saying you screwed up their transactions and they want you to be fired it will probably rock you a little bit more than we do.

“But Seth doing it, it was morale. He is a locker room leader. The same as in generations past, somebody always wants to wave the flag of the boys and the talent. It is even bigger than that and you don’t realize it because they are not on TV the incredible crew that we have that travels just as much as we do and just as frequently as we do. They are at the building before the talent arrives and they are their breaking it down afterwards. They care as much as we do they just happen to not be on screen and that was simply in my opinion Seth’s way of going, Hey! Screw you. I get you guys are upset. He was just standing up for everyone and I respect the sh*t out of Seth for that and I think everyone does. I think we need more people like that.”

On where he feels WWE goes from here:

“I am going to give you a weird analogy and I don’t know if it is a good one or not. Even Disney every once in a while turns out a movie that sucks. It doesn’t sink Disney and people don’t stop loving Mickey Mouse, they go that movie sucked and I won’t see it again and Disney says well that movie sucked and we need to make the next one better. WWE is not going anywhere and I’m excited for the state of the business. I like that the business is heating up and I don’t want to call it competition yet but it is something healthy and respectable and I say the word “yet” with that being the operative word and I hope the best for everybody and I think the best thing that could happen for everyone is competition. When everyone has to be on their toes all the time nobody is complacent, everyone is at their best all the time and the only people who really win is the fans. I lived through the Monday Night Wars and just to tell you the entire time they were going on I was never not at my house on a Monday night from 8pm to 11pm my entire high school career and beyond.”