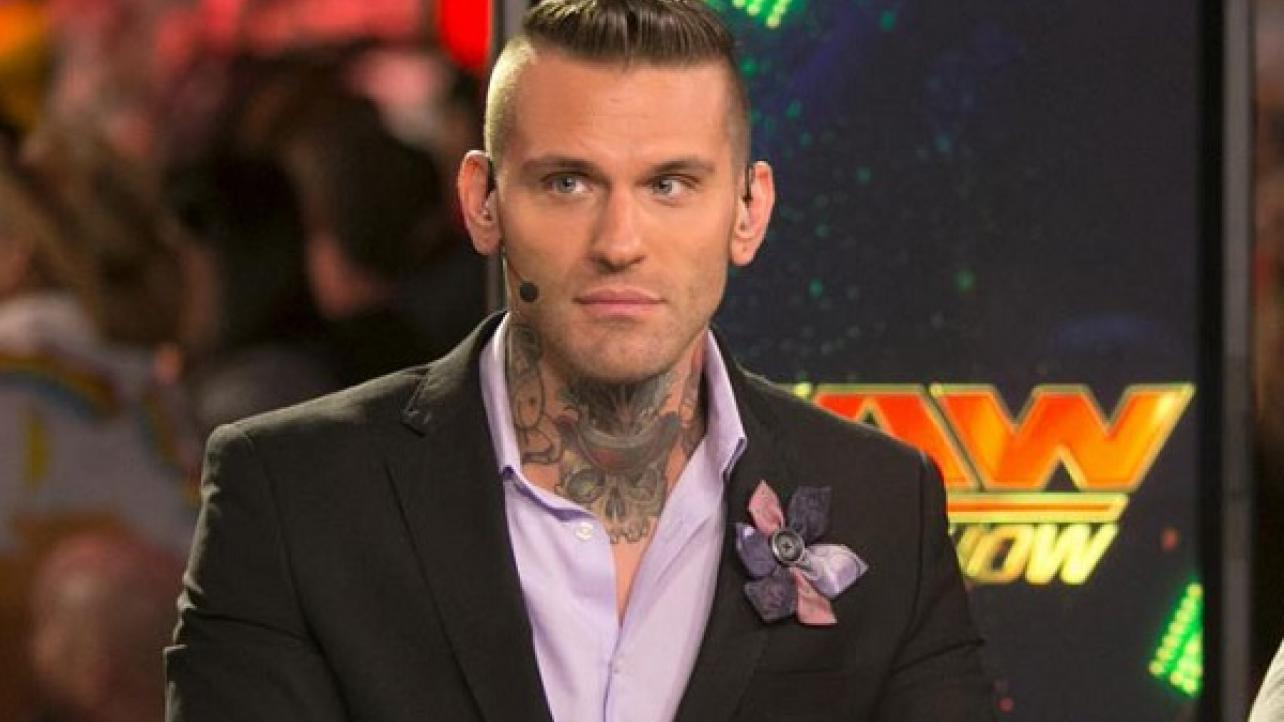 As noted, WWE broadcast team member Corey Graves recently appeared as a guest on Lilian Garcia’s Chasing Glory podcast for an in-depth interview. Featured below are some of the highlights.

On comparisons to CM Punk: “I get that a lot. [Punk] and I, up until semi-recently, were always close friends. He actually held my first-born kid before I did. I was in Spain. I knew my son was going to be born, and it became, ‘okay, do I take this tour of Spain to support my child or am I actually going to be in Pittsburgh [Pennsylvania] for him to be born. Punk was actually in town getting surgery of some sort. He buzzed me and asked if I minded if he goes and see [my] kid? So, he and I were super tight. I had learned a lot from him, and different paths happened, and different career choices are made. He and I don’t speak with each other anymore, but I never take that as an insult when they say that they see a lot of him in me because he helped me out a lot early in my career.”

On being forced into retirement due to concussion issues right when he was about to be moved up to the WWE main roster: “It was just frustrating [being saddled with injuries],” Graves shared. “I got to the point where I was pretty successful in NXT. We had the tag team titles. I came up at the same time as all three members of The Shield. I came up with Bray Wyatt, all these guys that are the who’s who, that was my class. We all came in together, roughly, and it became frustrating for me that I would get these injuries. I hadn’t thought anything of them. I didn’t know the extent and how dangerous concussions were. I had four diagnosed in a year while in WWE, but I didn’t know how many I had before then.

“Now, knowing what we know [about concussions], anytime you get your bell rung, it was probably a concussion. Over the years that I traveled the world and wrestled on the indies, I had that happen to me more times than I can count, so it was annoying to me, like, ‘oh, I got another concussion, so now I can’t wrestle.’ I couldn’t wait to take the ImPACT test, and get cleared, and get back in the ring because I felt like I was right on the cusp. I was hearing the rumblings. I was doing the live event tours with the main roster. I came up to wrestle with them.

“I don’t feel like I could have come up any closer than actually debuting on WWE. I had conversations about entrance music being written for me. It was right there, at least to my knowledge, so the injuries were annoying and hindrances, not necessarily any problems, so I was shocked that they told me that I wasn’t going to be allowed to wrestle anymore. It blew my mind and heart all at once, because in my mind I was just waiting to get cleared, like, ‘what is taking so long? I took all of your tests, I feel fine,’ but, obviously, the extensive testing had showed some things that they didn’t like.”

On finding out about his medical issues from Triple H: “We were at The [WWE] Performance Center and Triple H, who is the boss, he was there. I had been on the shelf for a few weeks and I was just like, ‘man, I don’t know what is taking so long?’ I remember talking to the doctors and asking when I could come back in, and they were giving me the run around stating that they were waiting on a few things, and having to look at a few tests, so I couldn’t get a straight answer from anybody. I had walked up to Hunter and he was in the middle of a workout, and I was passing through the gym. I was like, ‘hey boss, do you have any updates or anything?’ I don’t think he was prepared at that moment to tell me, but he didn’t want to sugarcoat anything, but he had kind of blurted it out. I kind of caught him off guard, so he didn’t have a gentle way of telling me, he was just like, ‘yeah, I would expect the worst.’ He was trying to justify it but you can tell that he wasn’t ready to be in that moment, but he didn’t want to lie to me, which I can respect that, but it was like the whole world came crashing down to me. I couldn’t breathe. I felt like I was going to burst into tears. I didn’t want to cry in front of anybody else, so I made a B-line out of the gym up into the locker room. William Regal was in there. He was standing there, and I walked in, and I broke down. I told him, and all he did was hug me. There wasn’t anything he could have told me that was going to change the fact that my dreams were being shattered on a moment’s notice. He was there for me and counselled me as best as he could.”

On transitioning into a new role with WWE and how that went: “By that point, I was panicked because I worked my whole life up until this point, so now, what the hell am I going to do? I have a family to support. I’ve sacrificed everything to be here, and it is right at the cusp, but now it is all gone, which is a lot to fathom in a moment. Luckily, I had a lot of friends and coaches that had tried. I remember Bill DeMott, who was the trainer at the time, asking me if I needed to go home, and to take some time off, and I said that the last thing that I needed was time off. I had jumped into everything. A few weeks had gone by and we had some conversations about what I was going to do. They weren’t going to release me because it wasn’t like I had done anything wrong, but it was just a crazy situation so essentially, they gave me the keys to the kingdom and told me to figure something out. I went and tried anything and everything. I started running the music at the NXT live events, learning the production side of things. I was helping out Dusty Rhodes with promo classes, which turned out to be one of the best blessings in disguise. I got taken out of the ring, but for the better part of the year I stood side-by-side by Dusty Rhodes. I got to spend countless hours with him and get to know him and learn. I probably learned more after getting shut down from wrestling about the business, characters, and life. I credit Dusty about getting me into old movies. He started talking about James Dean, which was Dusty’s favorite. Dusty was the absolute best; that became one of the coolest things to do at the time by spending the time that I got to spend with Dusty. That was one of the bright spots. I tried everything and anything. I was helping guys pick entrance music from the computer. That is credit to having the Performance Center around at the time because I had under one roof all these different aspects about the business that I never thought about. I was a [pro] wrestler. I was concerned with wrestling and cutting promos, but then you realize the production that goes into what we do and all the different avenues, which is really important, sometimes even more than the in-ring abilities. That is what makes the great truly great. Someone like a Randy Orton, or even a Roman Reigns, they spend so much time making sure cameras pick them up. There might be 15,000 people in the arena, but there are 3 million people at home watching, so to be able to translate that, that is what makes the greats truly great. There are guys that can do all these spectacular moves; they are tremendous athletes, but you don’t think about that end of the business, which I was guilty of that as well until I couldn’t do that part of the business anymore.”

Check out the complete Corey Graves interview from the Chasing Glory podcast with Lilian Garcia at LilianGarcia.com.