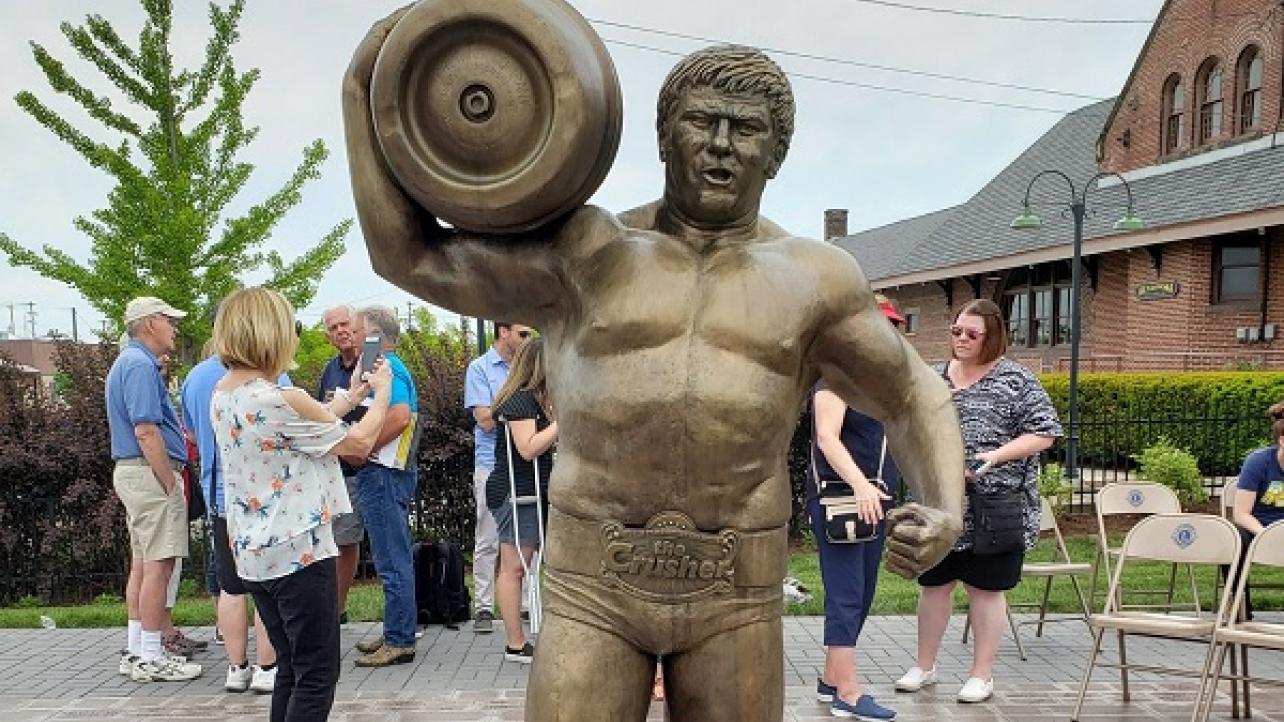 The Crusher Honored With Statue In Milwaukee Funded By $40,000 In Donations (Photos)

Late pro wrestling legend Reggie “Da Crusher” Lisowski has been immortalized by the city of Milwaukee.

This past week, the unveiling of a statue in honor of the late pro wrestling legend who had a historic career that spanned over five decades across 40 years, was unveiled at the special two-day CrusherFest festivities in South Milwaukee.

The Crusher was best known for his run in Verne Gagne’s American Wrestling Association (AWA) promotion.

During his run with the company, The Crusher was a former three-time AWA World Heavyweight Champion and a former nine-time AWA World Tag-Team Champion with Dick the Bruiser (5), Verne Gagne (1), Red Bastien (1), Billy Robinson (1) and Baron von Raschke (1).

During his original run with WWE, The Crusher worked with Johnny Valentine and a young Bruno Sammartino. When he returned in the 1980s, he worked a part-time schedule, mostly wrestling at the house shows in the Midwest area where his star-power was the strongest.

His last match for WWE was at a house show in Omaha, Nebraska on February 15, 1988. He filled-in for Billy Jack Haynes to team with Ken Patera, defeating the team of Demolition (Ax and Smash) via disqualification when their manager, WWE Hall Of Famer Mr. Fuji, tripped The Crusher with his cane.

The Crusher’s final television appearance for WWE was at their WWE In Your House – Over The Edge 1998 pay-per-view on May 31, 1998 at the Wisconsin Center Arena in Milwaukee. He was seated in the front row with fellow wrestling legend Mad Dog Vachon and was actually used in an angle on camera.

On commentary, Jerry “The King” Lawler referenced the two, mocking their age and trying to steal Vachon’s artificial leg, only to get hit by Vachon with it before The Crusher decked him with a punch.

At the ceremony to celebrate his life and career over the weekend, South Milwaukee Mayor Erik Brooks declared June 8, 2019 “Reggie ‘Da Crusher’ Lisowski Day” in honor of his memory.

“What an amazing crowd; this is unbelievable,” said Brooks at the ceremony this past Saturday. “This is a beautiful, bold and lasting tribute.”

Governor Tony Evers also issued a proclamation that Larson delivered as Evers was unable to attend.

Members of the Lisowski family were also in attendance, as were various pro wrestling legends and current performers.

Fellow AWA legend Baron Von Raschke was also in attendance at the event, giving a short speech in honor of ‘Da Crusher.’

WWE Hall Of Famer and another former AWA World Heavyweight Champion, Jerry “The King” Lawler, was scheduled to attend, however his flight was reportedly late so he wasn’t able to make it in time for the unveiling of the statue in honor of Lisowski.

The statue that was made by Milwaukee-based artist Thomas Holleran featured The Crusher holding a beer barrel on his shoulder with an iconic facial expression and wearing a title belt that reads, “The Crusher.”

Vanguard Sculpture Services created the statue and Holleran designed the sculpture with the help of Lisowski’s family. The statue is estimated to weigh over 600 pounds.

The statue was funded by a GoFundMe campaign that was started in late-2017. The campaign ended up going viral with donations rapidly coming in and easily reaching the goal of $40,000 within a few months.

Check out local TV news coverage from CrusherFest over the weekend via the video embedded below. Also below are some photos and clips from the event. For additional coverage of this past weekend’s two-day CrusherFest events, check out some more local news articles at JSOnline.com and TMJ4.com.

@EBischoff However, I was able to get Sodbuster Kenny Jay introducing Baron Von Raschke, as well as the Baron’s entire in-character speech. #CrusherFest pic.twitter.com/Iipc2KmWq4

Yesterday was magic. So many great people, amazing fans and a Legend came out to show love to Milwaukee’s Iconic favorite son. Thank you to everyone that made #CrusherFest the Event in Milwaukee. pic.twitter.com/1Tr2XgNBk0

Thank you #Crusherfest!! Thank you South Milwaukee!! I hope I can be to @ringofhonor what Crusher was to the AWA!! Humbled!!! pic.twitter.com/Gnr7QttY9r

The Crusher Honored With Statue In Milwaukee Funded By $40,000 In Donations (Photos)