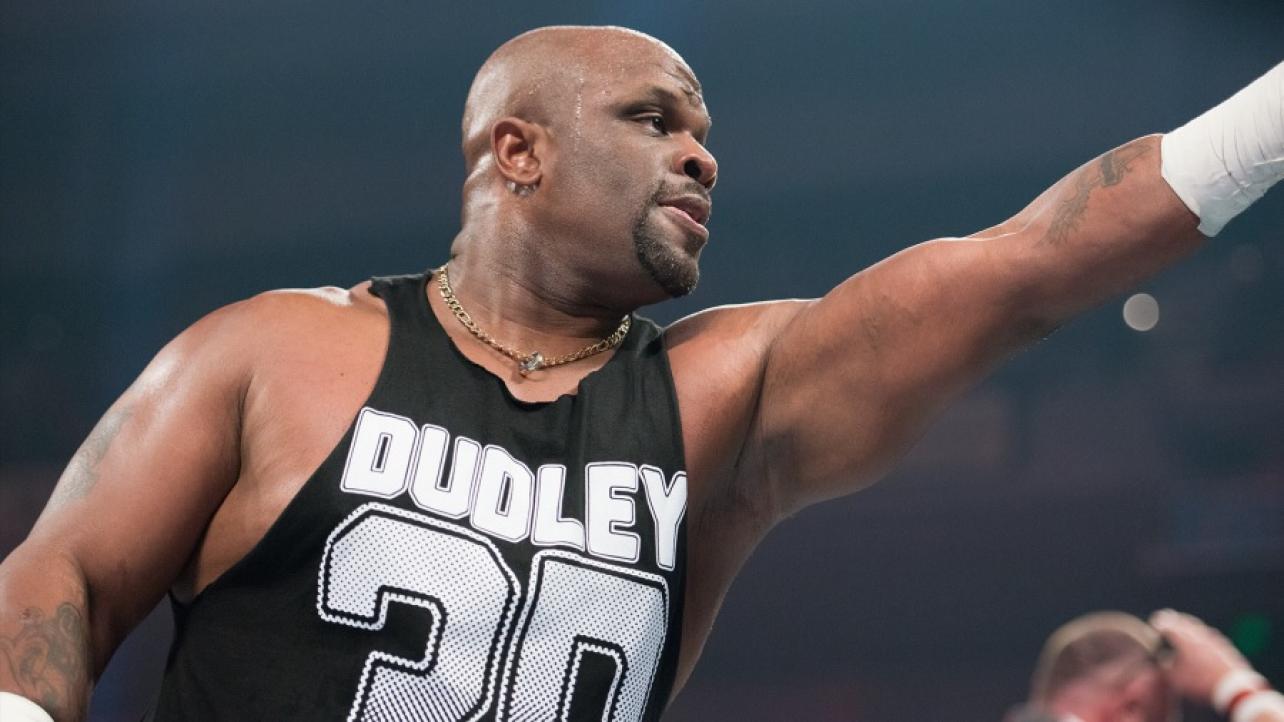 D-Von Dudley recently joined Bully Ray and Dave LaGreca on Busted Open Radio to talk about the legacy of The Dudley Boyz, being inducted into the WWE Hall Of Fame at WrestleMania 34 weekend later this year and more. Featured below are some of the highlights from the interview.

On The Dudley Boyz deserving respect: “A lot of things we accomplished over the years seems like it wasn’t recognized whether it was the promoters or the fans. I just felt like a lot of things we have done went unnoticed. Sometimes I feel like we weren’t treated the way we should have been treated. We had to fight and scratch our way to the top. No matter what, no one was going to out perform us. Call it cockiness or whatever, but we were the greatest tag team of our time. I think going into the hall of fame will definitely prove that we were one of the greats and we should be in the same league as some of the wrestlers who came before us like the LOD.”

On being idolized by younger wrestlers: “It was overwhelming to see a lot of younger talent come to us (when we came back to WWE in 2015) and tell us ‘Hey, I remember when you guys put Mae Young through a table’, or ‘I wanted to be a wrestler because of you’ or ‘I remember your legendary matches with the Hardy’s and Edge & Christian’ and thanked us. New Day was definitely one of them. We’ve had great matches with New Day, but I remember several times Xavier Woods came to us and said we were the reason he wanted to be a Pro Wrestler. When you hear stuff like that from a younger generation because it says to me what we did make an impact. To see these guys show us the proper respect means a lot.”

On whether or not younger wrestlers show respect for the business: “I don’t think Bubba and I ever encountered any disrespect. I do hear about other veterans who are disrespected by younger talent, whether it is in the independents or one of the bigger federations. It’s one of those things where every younger generation goes through it. You have that young hungry lion that’s trying to make a name for themselves. Sometimes they go about it the wrong way. One of the reasons Bubba and I opened the Team 3D Academy is when we left the WWE in 2005, we went to several schools to get back into ring shape for an All-Japan tournament. We noticed how a lot of the younger guys were being trained right and when we noticed that, we said to ourselves the business gave us so much and we should give something back. One thing you will learn at Team 3D Academy is respect. Not only respect for yourself and the veterans, but the business in general. If you don’t learn about respect for the business or the people who came before, chances are you won’t make it in this business. You have to be trained by someone who has been somewhere who knows what they’re doing. Some Joe-Schmo who opens a random school in a barn or warehouse… If that gentleman never made it in the business, how can you learn from that person? That’s why there seems to be a lot of disrespect from young wrestlers.”

On making the transition from ECW to WWE: “You can’t deny that ECW changed the face of pro wrestling. If there was no ECW, there would not have been an Attitude Era. No one pushed the envelope like Paul Heyman did. It was one of those things where the business had to change. We were against the establishment. We were the rebels and went out and did what we wanted.

“I remember they wanted us to put Terri Runnels though a table leading up to the Rumble. Bubba told Vince it wasn’t going to work. Vince asked why, and Bubba said it was going to be in Philadelphia, people were going to cheer and it was going to be something no one saw in WWE before. When we did it, what Bubba said was going to happen, happened. We blew the roof off of the place. Even more when we did it with Mae Young. Who would ever have thought of putting an 80 year old woman though a table. It’s one thing to do it to Terri, who at the time was young, very good looking and a sex symbol in WWE, but to do it to someone’s grandmother? You just don’t show any harm to old ladies. You can see in the clip when I put Mae on top of Bubba’s shoulders, everybody stood up. Everybody was looking toward the runway to see who was coming out. When Bubba put Mae though the table, that place erupted. It was one of things that really put us on the map. That happened 15+ years ago and people still talk about it today.”

On what being inducted into the WWE Hall Of Fame means to him: “It will mean a lot for my family to see it. As a kid growing up in Brooklyn, I didn’t have a Father figure in my life and my Grandmother was the one that kept everything going. Statistically, growing up in the projects with everything going wrong the way it did for me, statistically I should not have turned out the way I did. I didn’t listen to any of those statistics. I wanted to make something of myself. I wanted my kids to be proud of me and to be able to look at me when I’m gone and be able to say that my Father was someone who not only accomplished his dream, but did what he set out to do. I wanted my boys to see that. A lot of men are not good role models to their kids. I wanted to be that role model.

“For the twins, they were there since day 1. They were there during the ECW days, the early WWE days, the Japan days, the TNA days and the return to WWE. For them, to be able to see what their Father went through to get to where he is today means so much to me. To me that means the world. That says to me no matter where you grow up, no matter what storms, no matter what hurdles and no matter what challenges are in front of you, there’s always going to be light and sunshine. I believe I’ve done that. I’ve been through ups and downs and when most of those up’s and downs would have put you down and out for the count, I refused to stay down. For that, I want my children to be able to see that and know that no matter is in front of you, keep going. I cannot express enough hot grateful I am that when Bubba and I walk on that stage, my children will be right there and I might not be able to hold it together. Knowing what I went through to get to this level, to me that is a legacy that I am very happy and proud for to be able to leave. They will be honored and privileged to say ‘that is my dad’.”