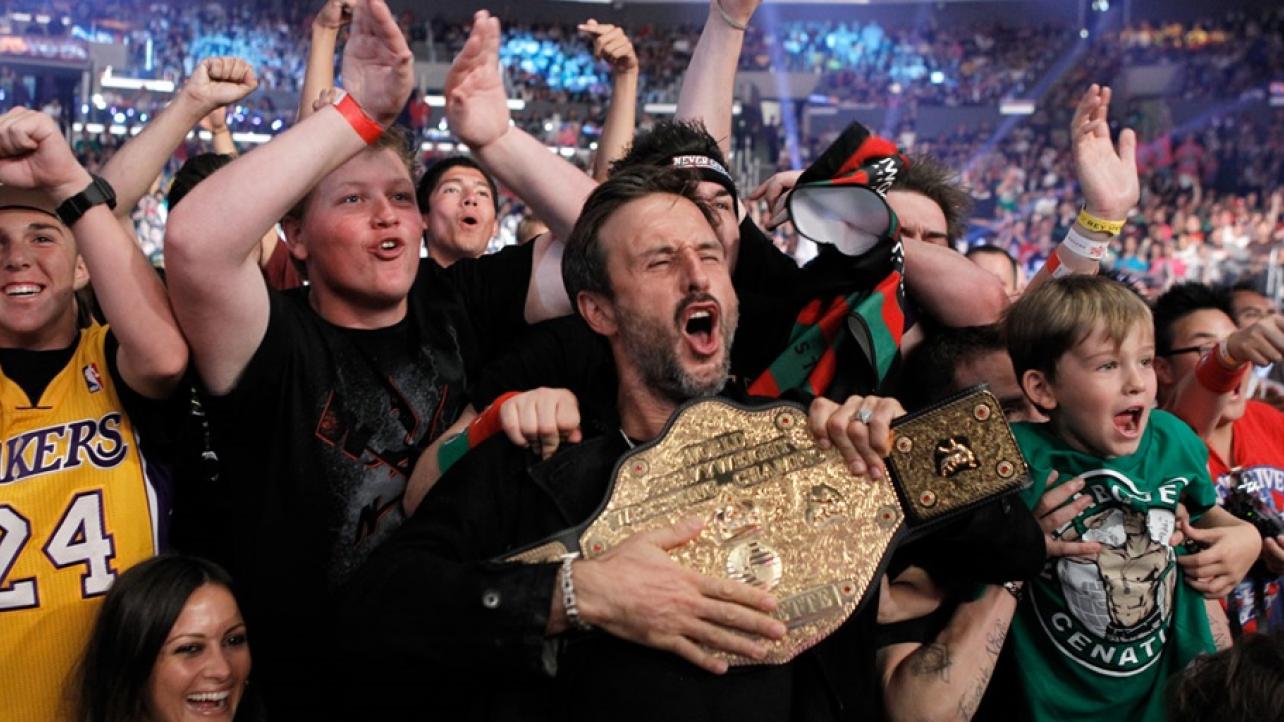 Former WCW World Heavyweight Champion and actor David Arquette recently appeared as a guest on The Two Man Power Trip Of Wrestling podcast for an in-depth interview. Featured below are some of the highlights.

On his WCW title victory and the backlash it received: “Yeah I know. The problem with that is I’m used as the example of like this decision was worse than when David Arquette got the belt. I’m always like the example and I’m the joke in a sense and I get it. I like to think of myself as the only fan that became a champion. I totally understand that other wrestlers were fans but they are professional wrestlers too, I am literally man on the street and became the champion. I don’t know how I am going to prove myself in the wrestling world and I’m going to have to do something at some point just to bring some respect to my name.”

On not wanting to win the WCW title when first pitched the idea by the WCW creative team: “It all is kind of blurry to me to be honest and I was just kind of going along with it and there was a lot of people exactly telling me what to do and I didn’t know that in one of my first matches I was doing Scotty Too Hotty’s move and that I had to wait for the crowd to say stuff and people just kind of threw me out there and asked what could I do? Well I could do anything because I was a black belt in Yoshukai Karate at the time and I can actually kind of fight but they had a big insurance policy on me so I couldn’t get hurt and nobody wanted me to beat them up so everyone had to beat me up (which is often the harder role in wrestling) but I enjoyed the experience. For me, I get to fly around with Hulk Hogan and Ric Flair and talk to them about Andre the Giant and all these legends and that is pretty much why I wanted to do it. I am from an acting family that goes back to Vaudeville so to me it is really kind of similar to the wrestling world as far as generational and almost like a carny lifestyle where you are on the road and I loved the opportunity to do that but I didn’t need to be the champion.”

On Vince Russo: “”He was really nice to me when I met him and I have nothing but respect for him. He does get a lot of the flack for what happened and people blame me for killing WCW. That was a battle that was going on hard and I still think that it is a shame that WCW the brand has been killed. Even if WWE just owned it and split it apart and used it as a foil for themselves because that was when it was always so fun and when both of them were going it was like a huge wrestling kind of moment where you have these two large organizations that are competing but now it is pretty interesting that there is all these little kind of up and coming (where they’ve always been there) with the invention of the internet and what Billy Corgan and Dave Lagana are doing at NWA is exciting I think there is going to be a lot more excitement and the fact that you can get everything on the internet is kind of bridging all these gaps and people are learning about different wrestlers and seeing matches online, I think it is pretty exciting and it is leading up to another rebirth of a really great time for wrestling.”

On the differences between pro wrestling and Hollywood: “I was super-surprised. I was totally sort of lost and again I didn’t get that wasn’t a lot of rehearsal, there wasn’t a lot of preparation, there wasn’t a lot of walking through because those things kind of move fast anyway. You are moving from town to town and you are getting there and eating at the thing, you are eating something and going back to your hotel and than you maybe go over something a second but it just left a lot of things really unclear for me. I didn’t know all of the stuff you could do, like I didn’t know you could say I don’t want to get punked like that or that you can beat me up but make it like I really got hurt or something or let me try a move. The only move I got them to let me do was jumping off the top rope in the triple cage match because I always loved Jimmy “Superfly” Snuka but they wouldn’t even let me land on somebody or hit somebody. Nobody wanted me to hit them and nobody wanted where I could hurt them.”

On if he thinks Kid Rock being inducted into the WWE Hall Of Fame opens up the possibility for him to be inducted some day as a former RAW guest host and WCW Champion: “I think and I totally approve of Kid Rock and he’s got that whole vibe that is right but he was never the Champion. That’s not my place to say that I should be in it or whatever but I was going through a divorce at the time (of RAW) so I was a little crazy and I had lost my voice and I took it upon myself to put down New Orleans (which I love that city) but I was just kind of playing the heel for a moment because I get it to get the crowd to hate you. But it was amazing to get put through a table by Randy Orton, I love that stuff and to me that was a fun opportunity and I really respect what WWE has done and the whole business and the history and what Vince McMahon’s done in general with that business is just remarkable because they are super-smart. The whole family being involved I love all of that. So I am just good doing my thing and I’d love to be included in the world a little and I’ve been asked and I always find that a little hard to do because it is kind of odd but I like meeting the fans and I like all that so some point it will make sense to do something that might bring me back into the world a little more.”

On Ric Flair telling him that he was accepted by the wrestlers: “It is such and inside world and I am such an outsider and there is some animosity and you want to play it safe and you don’t want to alienate the fans and you don’t want to get people upset in a way that isn’t helpful for the sport. But he (Vince) was great and Triple H was really helpful too in that process. Charles Robinson has always been super cool, “Mouth of the South” (Jimmy Hart) was amazing at that time and Ric Flair threw his arm around me when I was kind of going through a hard time and he was telling me stories about running around the hotels with just the robe on and that he would lose the robe and have to find it by the end of that night and just great stories like that. But we were at the hotel bar one night and he threw his arm around me and it was towards the end and he said: “Listen up fellas. He’s one of us.” And that to me was like OH MAN thank you for that because I was such an outsider and people just hated me and they wanted me to have egg on my face and I totally understood it. “

Check out the complete episode of The Two Man Power Trip Of Wrestling Podcast featuring the David Arquette interview at Podomatic.com.