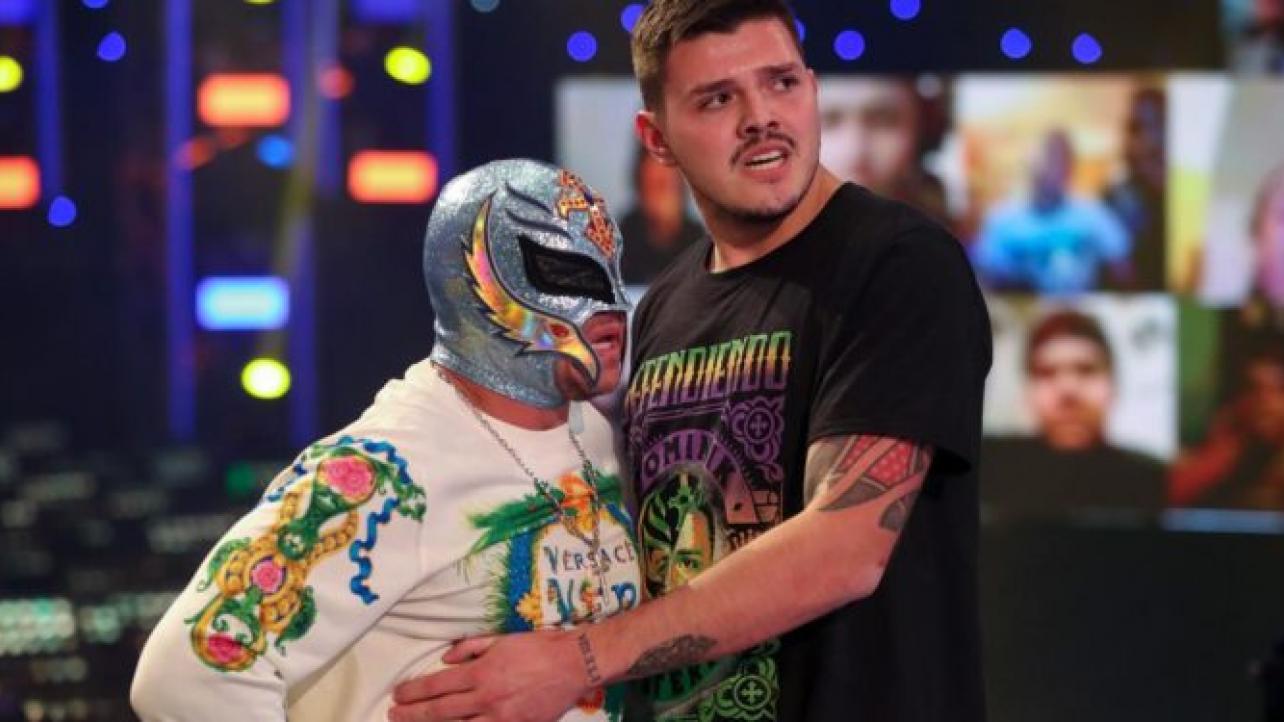 During his appearance on the popular pro wrestling program, the WWE Superstar and son of Rey Mysterio spoke about the classic custody ladder match between Eddie Guerrero and Rey Mysterio, how he re-watches his matches 20-to-30 times so he can see where he needs work and more.

On how he likes to re-watch matches he’s in 20-30 times to see where he can improve: “Even nowadays, I still freak out, you know, whenever I have to go out and I gotta make sure I perform every time I go out there because if I don’t, I feel like I’m already losing a step and every time I have one of my matches, I gotta make sure that I watch it at least 20 to 30 times before I go to bed that night, the night that I wrestled. So like, I just wrestled Bobby [Lashley] on Monday and I’m already — so that night, Monday night, I watched it maybe 15 times before I went to bed and started packing just because I needed — I need to know what I’m doing wrong and I’ll watch it over with my dad a couple times and he’ll let me know, he’ll nitpick and tell me his little details but I’ll go back and I’ll look at it and I’ll be like, ‘Man, this was terrible.’ Or just looking at my footwork or just something, I’m always kind of nitpicking on myself to try and be better and I’ll even reach out to my godfather and even Lance [Storm] sometimes to send them my matches and try to get as much as possible just so I can, you know — because at the end of the day, I want to be able to put my best effort and entertain and have good matches that people remember, you know? And I’m just trying at this point.”

On the classic custody ladder match between Rey Mysterio and Eddie Guerrero, and how Eddie got mad during it due to a missed time cue: “There’s certain things that I remember [about being involved on WWE programming as a child] like after the SummerSlam match [Rey Mysterio vs. Eddie Guerrero], there was a missed time cue there and I remember going in the back and Eddie was just losing it. He was just freaking out and I remember I asked my dad, I was like, ‘Yo, is he good?’ I was like, ‘Is he angry because I’m not going home with him?’ That’s what I was thinking. I thought he was actually angry because he lost and I couldn’t go home with him. I was like, ‘I guess I’m pretty cool.’ But everything was just super, super straightforward and like I said, I think they just wanted a scared eight-year-old, seven-year-old kid and I was actually scared so it worked out perfectly.”

Check out the complete interview below, or at YouTube.com. H/T to POST Wrestling for transcribing the above quotes.