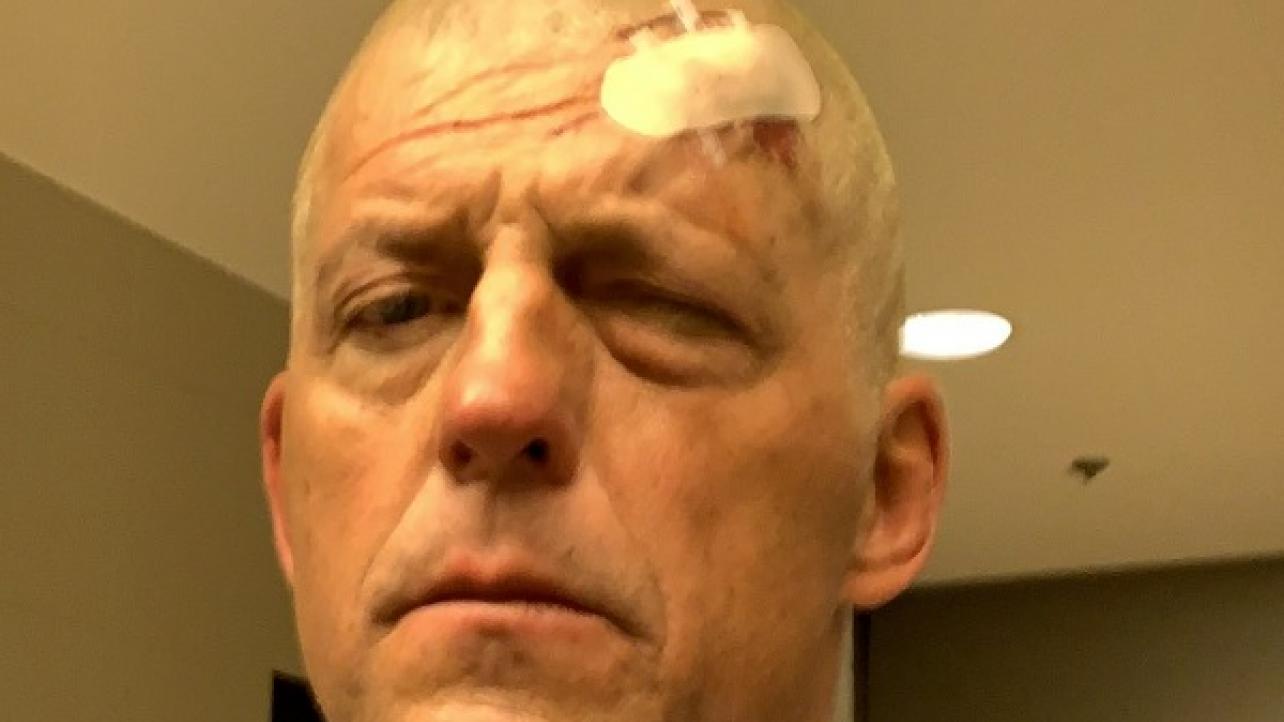 Dustin Rhodes’ Face After Double Or Nothing, Tag Match Announced For AEW 7/13 Event

Following his violent, bloody battle with his brother Cody Rhodes in the “Nightmare vs. Natural” match at Saturday night’s AEW: Double Or Nothing pay-per-view, Dustin Rhodes is pretty banged up.

Dustin, at age 50, worked a 23-minute match at Saturday night’s PPV at the MGM Grand Garden Arena in Las Vegas, Nevada that resulted in his left eye being swollen shut. He was also covered from head-to-toe in blood, as best displayed by the emotional post-match hug that he had with Cody (View Photo Below).

“I’m ok,” wrote Dustin via his official Twitter page after the show. The tweet also included a photo of his face after he cleaned up the blood and got bandaged up. “God bless y’all and from my heart of hearts, the greatest night of my life.”

As noted, the 31-year veteran of the pro wrestling business isn’t done just yet.

After the “Nightmare vs. Natural” match, Cody said “he needs his big brother” to be his tag-team partner in his scheduled match against The Young Bucks at the AEW: Fight For The Fallen event in July.

AEW: Fight For The Fallen is scheduled to take place on Saturday, July 13th at Daily’s Place Amphitheater in Jacksonville, Florida. Proceeds from the gate of what will be the third event in AEW history, will be donated to benefit Jacksonville’s Victim Assistance Advisory Council.

Check out the photo of Dustin Rhodes’ banged up face after his brutal battle with Cody Rhodes below. For those who missed the show on Saturday night, you can also check out our complete AEW Double Or Nothing Results.

I’m ok. God bless y’all and from my heart of hearts, the greatest night of my life. @AEWrestling #AEWDoN pic.twitter.com/AZoZGZQCZ5

“Lost a pint of blood, but gained a pound of cheese” — A @dustinrhodes narrative in 4 pictures #DustinRhodes #AEWDoN #pizza pic.twitter.com/n0DM3DiFWX

Wow. What a show. #DOUBLEorNOTHING really reminded me what I love about pro wrestling. I thought my passion for being a fan of WATCHING the product was gone. It’s not. Thank you, @AEWrestling!#ALLIN #ALLELITE #AllEliteWrestling #AEWrestling #AEW #AEWDoN #CodyRhodes @CodyRhodes pic.twitter.com/EiIyrPd7sg

Dustin Rhodes’ Face After Double Or Nothing, Tag Match Announced For AEW 7/13 Event