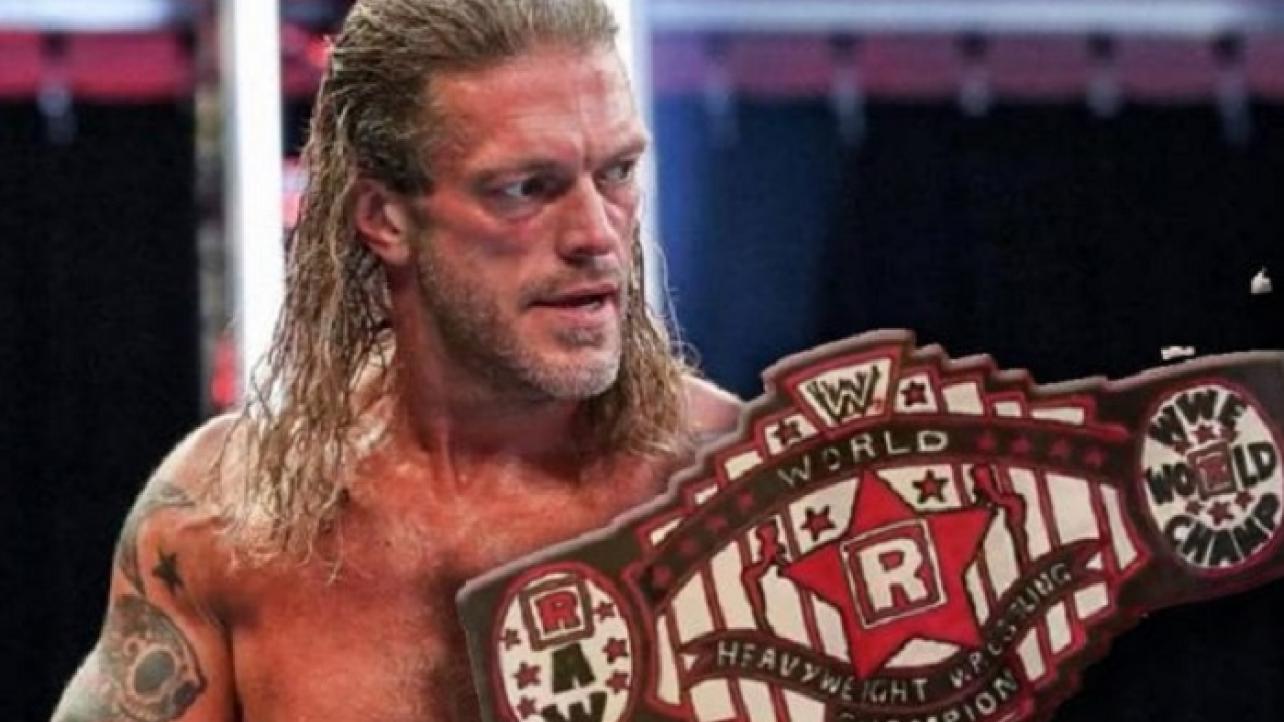 Edge Recalls Custom Rated-R WWE Title He Had Made That Was Never Used, Reveals Artwork (Photos)

WWE Untold: The Champ Is HeRe has finally touched down on the WWE Network service, and the new episode of the WWE Network original documentary series has the pro wrestling world and WWE Universe alike buzzing.

“The Rated-R Superstar” recently told the tale behind his old custom “Rated-R Championship” belt during his appearance on the latest installment of the WWE Network original documentary series, “WWE Untold.”

As noted, “WWE Untold: The Champ Is HeRe” premiered on the WWE Network over the weekend, featuring a look back at the iconic rivalry between WWE Hall Of Fame legend Adam “Edge” Copeland and John Cena.

During his appearance on the latest edition of the WWE Untold series, Edge spoke about the origins of his “Rated-R Championship” custom title belt that he had made during his feud with Cena as a direct result of his hatred towards the custom spinner title that Cena carried.

“I hated the spinner belts. [I] despised them,” Edge said when beginning to tell the story on WWE Untold. “When they approached me and said, ‘We’re going to do a Rated R Championship belt’, I was like, ‘Right, let me get to work!’ I got home and drew up this beautiful championship belt.This thing was badass (View Photos Of Artwork Edge Had Done For Custom Rated-R Superstar WWE Title).”

He continued, explaining how he recalled things ended up going when all was said-and-done.

Edge concluded, “That, to me, is the one championship that needs to look like a championship and not somebody’s hub caps.”

Subscribe to the WWE Network today to watch the complete episode of “WWE Untold: The Champ Is HeRe” featuring Edge and John Cena.

.#ICYMI, isolated #artwork drawn by #WWE legend @EdgeRatedR to show #wrestling management behind-the-scenes what he had in mind for the design for his new “Rated-R Superstar” custom #WWEChampionship title belt can be seen via the #PHOTO attached to this tweet. (#WrestlingTwitter) pic.twitter.com/DC0avZljRZ

Just #ICYMI: Check out the exclusive artwork done for special custom “RATED-R SUPERSTAR” #WWE Championship that was in the works, but never used after company went with a different Rated-R Title belt design for #Edge‘s rivalry with #JohnCena (…)

Experience @EdgeRatedR and @JohnCena‘s legendary 2006 rivalry like never before in : , available NOW on WWE Network. pic.twitter.com/ihr3zP8Jrx

Am I the only one who thinks @EdgeRatedR — consciously or subconsciously from childhood as a #wrestling fan — drew inspiration from old @nwa TV title for artwork he did for Rated-R Championship title that #WWE never used? (#WrestlingCommunity)

Edge Recalls Custom Rated-R WWE Title He Had Made That Was Never Used, Reveals Artwork (Photos)