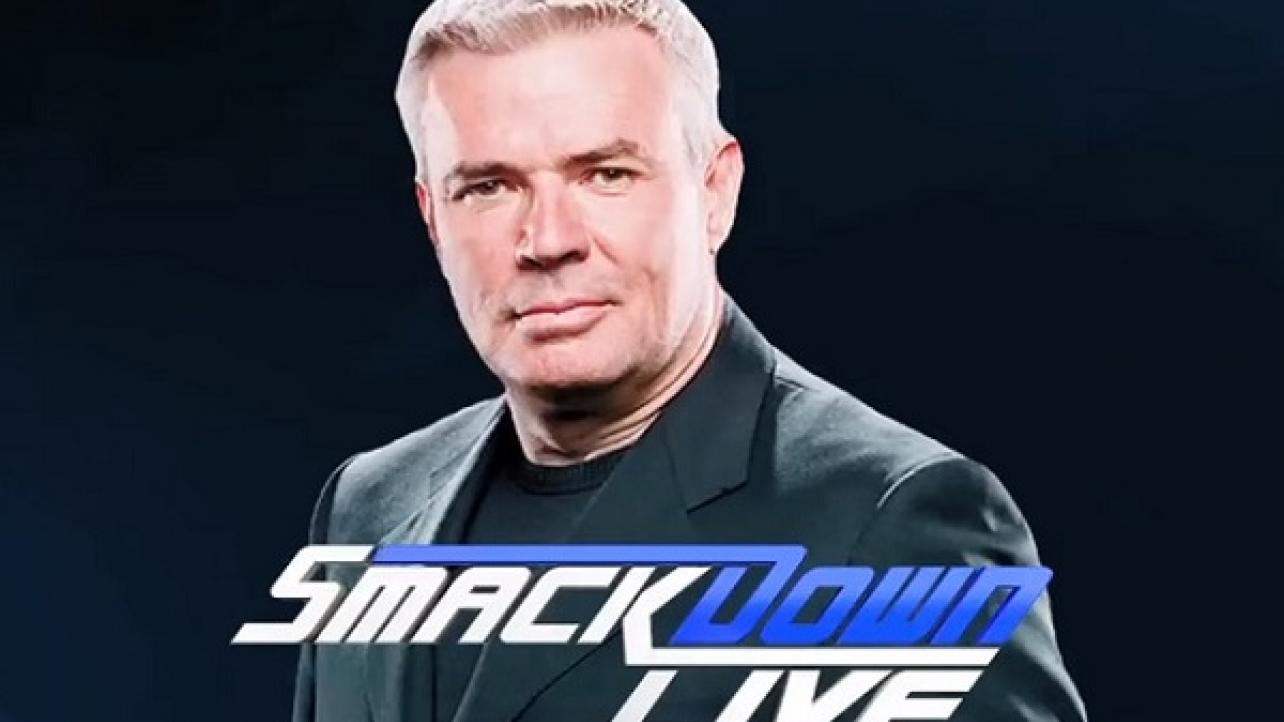 During the latest episode of his “83 Weeks” podcast, WWE’s new SmackDown LIVE Executive Director — Eric Bischoff (@EBischoff) — cleared up some of the rumors circulating on the internet and in “dirt sheets” regarding his new position behind-the-scenes in the company.

“83 Weeks” podcast co-host Conrad Thompson (@HeyHeyItsConrad) asked Bischoff during episode number 66 of the popular podcast, titled, “Scott Steiner In WCW,” if he wanted to address the rumors going around about his new role in WWE.

“Do you want to address all the rumor and inuendo about your role with WWE,” Thompson, who also promotes the popular STARRCAST conventions, said to Bischoff early on in this week’s show.

Thompson continued, “I think a lot of people are having fun on the internet [saying] ‘Well, Bischoff is supposed to be running SmackDown [LIVE] [and] he’s not even here!'”

Bischoff, who is never one to shy away from a controversial question as he, better than most, is well-aware that “Controversy Creates Cash,” would go on to elaborate on the subject at great length.

According to the former WCW Executive Vice President, “everything that he has read” regarding his new role in WWE “has been wrong so far.”

“Yeah, it’s really interesting,” Bischoff started. “I’ve been reading a lot of the ‘dirt’ f’rom a lot of the ‘dirt sheets’ [and] faux journalists out there that are presumably try to convince people that they really know what’s going on, and so far the reporting on all of my … everything that I’ve read has been wrong so far.”

He continued, explaining why he did not want to go out of his way to give any credibility or legitimacy to “the crap [that reporters] have written” about the subject.

“I’m not going to address this, specifically,” said Bischoff. “Because number one, I don’t want to give them or the crap that they’ve written any credibility, but I’ll just … suffice to say if you’ve read it in a dirt sheet, or online, or in a blog — it’s been wrong — from day one.”

Regarding the media coverage of the details surrounding his new gig with World Wrestling Entertainment, Bischoff concluded by once again reiterating his point that the news coverage of this story has been incorrect from the word “go.”

“Anything that’s been written or reported so far has been wrong in terms of what my role actually is, and what it will be, and when my start date will be,” Bischoff said. “That being said, just [to] get that out of the way, if you’ve read it online — it’s been wrong.”

From there, he would expand ever-so-slightly on the actual additional obligations and responsibilites that he has voluntarily added to his plate by accepting the new role of Executive Director of WWE SmackDown LIVE.

“[With] that being said, it’s going to take me … this is not … and clearly I knew this before I took this job, before I took this role, and certainly more acutely now … this is such an important job that there’s no way that me or anybody else is going to walk in and take control of anything immediately,” said Bischoff.

“It’s going to be a process, and in my case it is going to be a long process,” he admitted. “Because it is a very big job, and even learning the people involved and their respective roles and the processes that are involved … it’s just going to take time.”

“It’s a process and my process is going to begin … it started a little bit this week,” Bischoff revealed, “in terms of my intergration into the process, but it’ll start becoming even more tangible on Tuesday [July 30th], which will be the first time that I’ve even attended a production meeting. And like I said over a period of time it’ll evolve and it’ll change beyond that.”

In wrapping up the discussion about the topic, Bischoff said, “But like I said, if you’ve read it online or read it in a dirt sheet, kick yourself in the ass for spending ten bucks a month for it, and realize that it’s been wrong.”

Check out the complete episode number 66 of the “83 Weeks” podcast with Eric Bischoff and Conrad Thompson below, or at the official website for the show, 83Weeks.com.