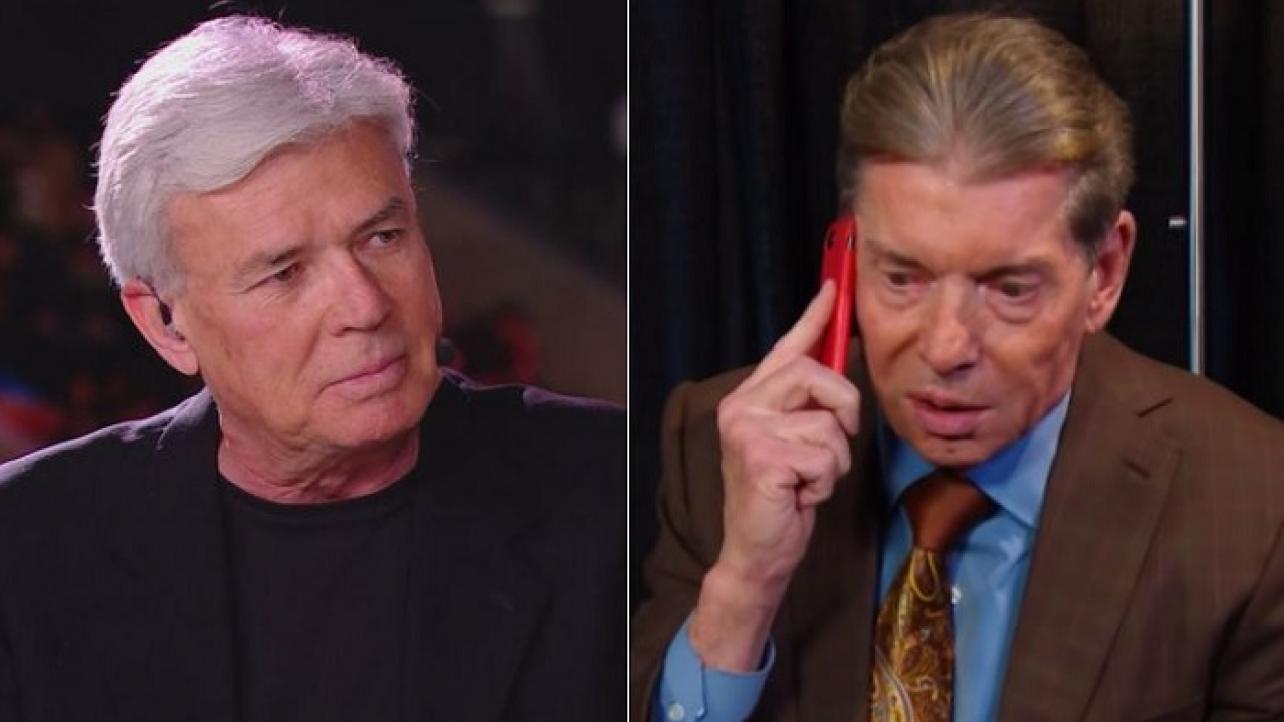 Eric Bischoff appeared on After 83 Weeks with Christy Olson where he discussed his departure from WWE, his conversation with Vince McMahon about AEW, NXT vs. AEW competition and whether AEW has contacted him about joining their company. Here are the highlights:

Former executive director of SmackDown Live Eric Bischoff discusses his WWE exit on the post-show for 83 Weeks, After 83 Weeks with Christy Olson. Revealing more on how he learned his short tenure was coming to an end, Eric explains why “working eighty hours a week at WWE” would have put a dent in his future plans anyway. But he’s spilling the inside details on working for Vince McMahon, including whether Vince is concerned about AEW. Going deeper into detail about than he did on his own show, Eric answers the most-asked question since getting the axe—Has AEW reached out to hire him?! Excerpts are below.

Did Vince himself deliver the news that Eric’s WWE tenure was ending?:

“Yes, I did have a very good conversation with Vince McMahon.”

If Vince is paying attention to AEW:

“Vince asked me actually, a couple of days after the first episode aired, what I thought. I was pretty honest with him. I thought the action was good. But I thought what made that show really stand out to me was just how engaged the audience is.”

The audience, to me, made their show so much better than the NXT show. Not that there’s anything wrong with the NXT show. The action in the ring was great. The characters are great. There are a lot of great things about it. But when you put a live event inside of a small, confined studio kind of like TNA, I don’t care how great the action is in the ring. It just doesn’t have that big event feel to it.”

Whether Eric has talked to AEW about working for them:

“I have not spoken with anybody from AEW. Not one conversation. The last conversation I had with anybody that’s currently in AEW was probably Cody Rhodes, and that was about two years ago…It was right after he left WWE and I called him, just to congratulate him and let him know how much I respected his decision.”

Why he was planning to only work at WWE for a few years:

“My wife and I have a beautiful home in Wyoming. We want to travel. There’s a lot of things that we still want to be able to do, and working eighty hours a week at WWE would put a little bit of a dent in those plans.”

Does Eric want to continue working in the wrestling business?:

“Of course. You know, I always will. Thats what I’ve done for the largest part of my adult life, and I still have a passion for it. I think this latest experiment probably proved to me more than anything that it has to be the right opportunity. Not just right for whoever I would work with, but right for me as well.”

Check out the complete Eric Bischoff interview below.