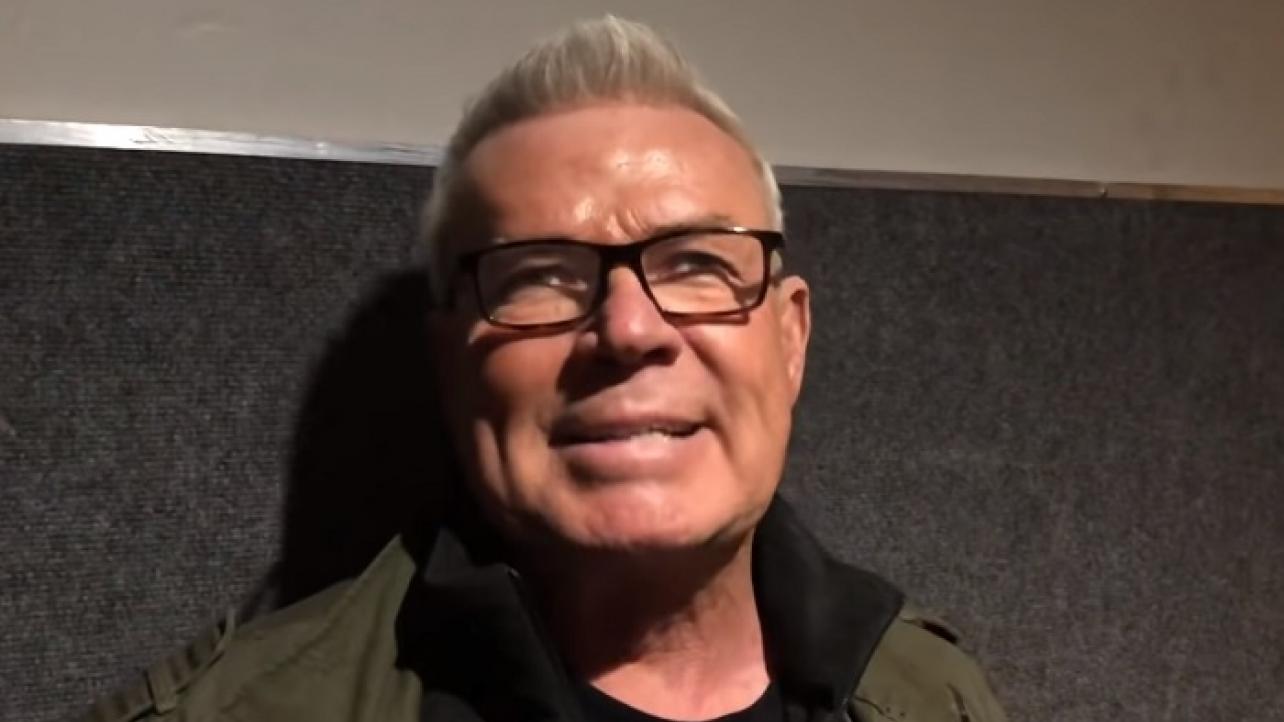 Eric Bischoff recently shared his thoughts on the “extreme success” All Elite Wrestling (AEW) is achieving already, their weekly AEW Dynamite vs. NXT On USA battle and more during an interview with Digital Spy.

On Bruce Pritchard helping him get the Executive Director job for SmackDown: “Well, Bruce Prichard and I have been friends really since my tenure at WWE as a talent, going back to 2002, and we remained very close friends during that period of time. And shortly after Bruce [came back] to WWE, we were chatting. He said, ‘Hey, do you mind if I drop your name? Would you be interested in perhaps coming back to work for WWE?’. I said, ‘Sure. Feel free’. And a couple months later, I was packing my bags and moving to Stamford.”

On his job details: “Basically, I oversaw just about everything [on the] SmackDown brand. I oversaw, managed, created the team, as well as interfacing with all the other departments that dealt with SmackDown-related issues.”

On his departure and whether he would ever return: “You know, I don’t want to get into it too much, I think, dare to say that WWE is an amazingly successful company, and they have their own processes, and their own way of doing things, and managing Creative, and I just don’t think I fit into that environment.”

On the positive and negatives he sees within the company: “Well, I mean, there’s a lot of positives. The fact that they’re on Fox Network is one very big positive. There’s a tremendous depth of talent on the roster, and I think probably more amazing than even the WWE talent on the roster is the depth of talent on the business side of WWE, as well as the production side. I’ve often talked about how impressed I’ve always been, really, with WWE production, but even since I was there last in 2007, I think the capabilities and the talent on the production side of things for WWE, it’s just, saying ‘world class’ doesn’t give them enough credit.”

On his thoughts on AEW: “They’re obviously extremely successful. I think that they’ve probably outperformed almost everybody’s expectations, in terms of the success on television. Clearly there’s success on the live event side of the business, and they’ve created a [big] buzz. They’ve got a great foundation of support that they’ve built up from social media and YouTube, and all the work that they’ve all been doing on the independent scene. Obviously, not Chris Jericho, he was in WWE, but the rest of the talent there have done a great job building equity in themselves and creating their own brands within the independent scene, and I think that’s [why] they’ve been able to bring a lot of those fans over to TNT network. So, nothing but great things to say about them, I think they’re doing a great job, and I wish them the best. But, it’s early. You know, they’ve only been around for a year, so let’s have this conversation a year from now and see how it goes.”

On NXT finally beating them in the ratings: “You know, I don’t think about it too much. I think people make way too big a deal out of that competition. Again, I’ll say the same thing I said a few moments ago, let’s talk about it a year from now. With WCW and Nitro, we went head-to-head against the flagship show, Monday Night Raw. Of course, there was no SmackDown then, but it created a buzz, although it took us quite a long time to really beat WWE consistently. Beating them a week here and there, or three or four weeks in a row, was really not that big a deal. I think what you have to look at is, is their audience growing from week to week? AEW’s, or WWE’s, for the matter. Or NXT’s, whomever. If your audience is building from week to week, that would indicate that you’re doing something right. If your audience is staying flat from week to week, you’re preaching to a choir. Worse case scenario, if your ratings start declining consistently on a week-to-week basis, then it would suggest, to me at least, it’s time to go back to the drawing board. So, I think until enough time goes by, that people are able to see a pattern, and start seeing a trend, but eight weeks of television doesn’t a trend make.”

On what he thinks about CM Punks return: “Well, let’s deal with his return to broadcast. I think it’s a great opportunity for him, it’s a great opportunity for anybody, and I think the fact that CM Punk was able to, you know, he chose to walk away from WWE, he had a dream or goal of competing in the UFC, says a lot for him. That was a big leap off a tall building, but he did it because he wanted to give that a try. You gotta admire somebody like that. I do. As far as where it could lead, who knows? I mean, come on, it’s the wrestling business for crying out loud [laughs]! Nobody knows for sure.”

Check out the complete Eric Bischoff interview at DigitalSpy.com.