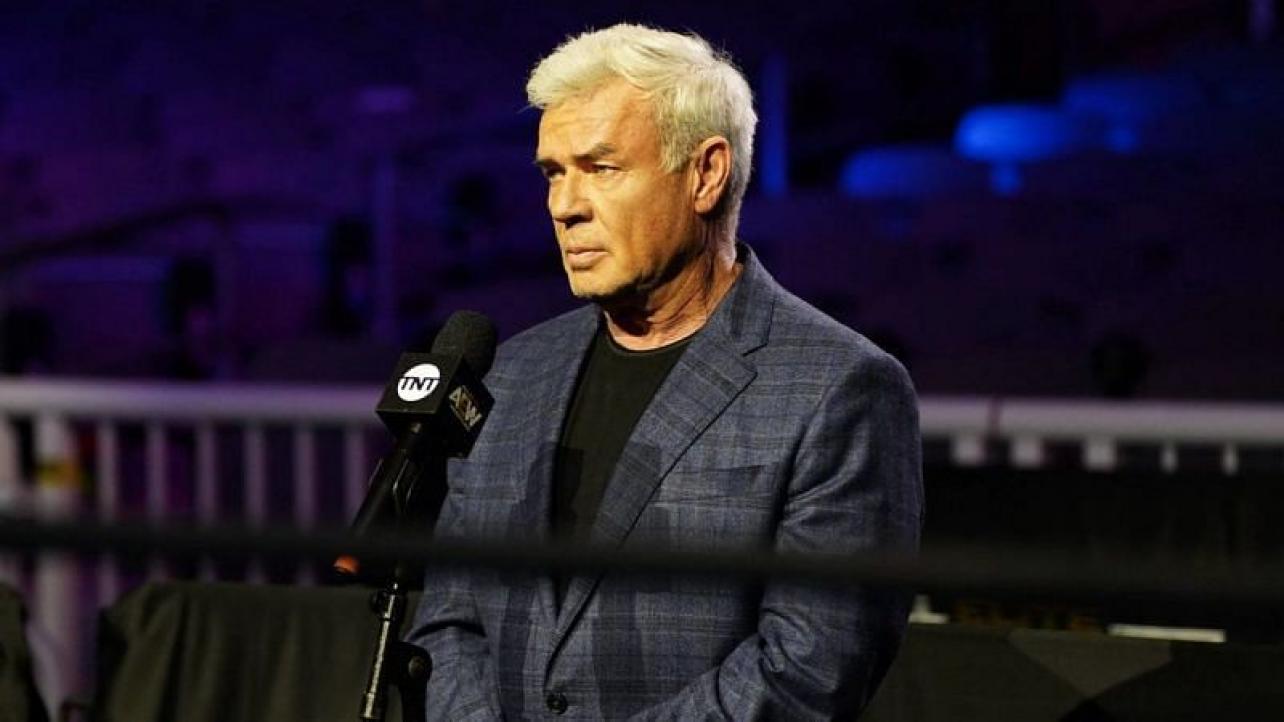 WWE Hall of Famer Eric Bischoff recently appeared on Foundation Radio to discuss a number of topics, including how much he missed live crowds, and what he thinks is necessary for a potential AEW and WWE crossover. Hear what the former WCW president had to say in the highlights below.

How much he missed crowds and talks about them being present during his WrestleMania 37 appearance:

“I miss it so much. Whether it’s the Kentucky Derby, it’s on, this is something that’s like maybe I’ll watch it, I’m not a big horseracing fan. I’m going to watch about anything that has a crowd. I almost don’t care what it is. I just need that fix. Like all of us, you watch basketball, you’re watching the game, but it’s not the same. You watch professional wrestling, it’s good, but it’s not the same. you’re missing it, I’m missing it a lot. It’s interesting, it’s an interesting period of time to be going through that I think is illustrated in its own way something that I’ve been saying for years and years, especially on my podcast and interviews. I was told that Elvis Presley once said that the most important part of any of his shows is the audience. Without the audience… ehh. I’ve used this analogy long before coronavirus…I’ve always talked about how important the crowd is. I used this analogy once, Adam, can you imagine – what’s your favorite fantasy match of all time? Whatever that may be, doesn’t matter. Let’s say Sting and Undertaker when they were both in their prime, right? What if that match happened but it happened in front of no crowd? It would suck. People wouldn’t care, and no matter how great the match was, no matter how hard everybody worked, no matter how creative it was , you wouldn’t remember it, because it didn’t create any emotion, and that’s the thing about wrestling in particular. Without that crowd, to help convey that energy and emotion so that the viewer at home can actually feel it or live it vicariously through that little box that they’re watching – without that element of the product, it’s amazingly difficult. For me to be able to walk out there, and I was only out there for a minute, a minute and a half, waving to the crowd, you know, trying to be cute, trying to be funny, but really being very humbled, but just to be able to be out there for a minute, minute and a half was like ‘WHOA, I remember that feeling.’ It was really cool.”

On developing a formula to get back to storyline driven aspects of pro-wrestling:

“Someone is going to have to develop a formula. It’s not set in stone. It’s not math, it’s art. Look at stand up comics. All of the best – Jerry Seinfeld has a formula for developing his comedy. It’s a very imprecise formula. Somebody is going to have to develop a formula like is used in every other form of entertainment, whether it’s music, whether it’s movies, television, novels. There’s been a formula for great stories for a long time. Somebody in wrestling is going to look at the basic architecture of storytelling and then modify it and apply it to the unique audience that professional wrestling is. You can’t produce a professional wrestling show like you produce a sitcom, or a drama series on television. You can’t produce a professional wrestling show like you produce a movie. But there are elements from both of those and other forms of storytelling, there are elements of those forms of art that can be applied and modified to fit wrestling so that you can have a more systematic and precise approach to telling your story or creating one because, trust me I think I’m pretty accurate when I say this – for the most part, it’s just a bunch of people getting together and throwing ideas at the wall to see what sticks. Now, what makes a difference between consistently good programming or not is the experience those people have in coming up with ideas, throwing them at the wall and seeing what sticks, and executing them. There’s a lot of very talented people at that method of story approach, but that’s the same way that wrestling was produced and approached creatively since the beginning of wrestling time. The business has changed, television has changed the business – television will change the business, and it has in some respects, but the storytelling aspect, and the way wrestling is approached is lagging way the fuck behind the production value, the athleticism, the size, the scope, the popularity. The only thing that hasn’t really grown and kept up with all those other great things is the approach to storytelling. It’s being done the same way now that is was in the 60s and 70s.”

Says a WWE and AEW crossover could only work if there are high stakes:

“I know that everybody wants to talk about what was the Wednesday Night Wars, and comparing AEW to WWE, and here’s what has to happen for that to be viable, the AEW/WWE approach, AEW’s gotta go head-to-head. There’s gotta be a fight. There has to be a battle. Going back to storytelling, what are the stakes? In a case where you’re laying down an AEW vs. WWE match, champion vs. champion, okay that sounds really cool if you’re a cosplay wrestling journalist and a fan of those people. But it only works if there’s stakes. And the only stakes that matter are who turns out the biggest audience. That’s a fight that people will get behind. That’s a fight that people want to be a part of. That’s what happened during the Monday Night Wars. Why did it work? Because it was real, and because people were invested. They were invested in the characters, they were invested in the fight between the two companies. That actually was more important to them, whether they knew it or not, from a storytelling perspective, the battle between WCW and WWE was a more interesting story than the battle between the two people in the ring. That’s why it worked. So until AEW gets to the point where they’re delivering a similar-sized audience and start trying to take some real estate…it’s a war. If you want a war, you gotta have a freaking war. You can’t just, you gotta do it. AEW needs to take away some WWE real estate. And when that starts happening, people will believe the war. And then they’ll be invested. But otherwise it’s just cosplay.”