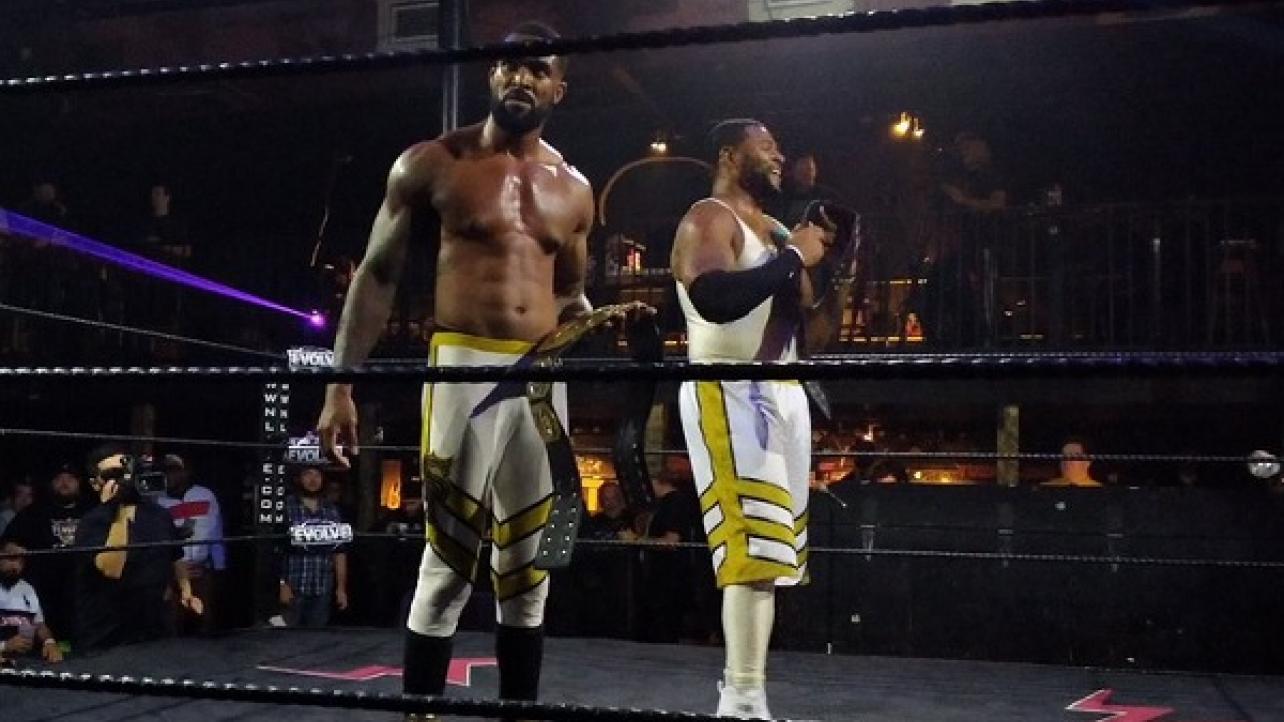 Featured below is a complete recap of EVOLVE 114, which comes courtesy of JJ Williams and F4WOnline.com:

– Chance Auren & Omar Amir defeated Mat Rogers & Zenshi in a pre-show match
– Lenny Leonard and Ron Niemim who were the broadcast team at the event, appeared in the ring and welcomed us to the show.
EVOLVE Champion Shane Strickland made his way to the ring since he was scheduled for a title defense but didn’t have a challenger — which brought out NXT’s Fabian Aichner to set up a title match for later in the show.
– Darby Allin defeated Josh Briggs to advance to the main event ladder match for the WWN Championship
Great match here with the much larger Briggs giving the seemingly indestructible Allin everything he had — but it wasn’t enough.
– Priscilla Kelly defeated Jessie Elaban
This was a matchup of Mae Young Classic participants, with NXT’s Elaban making an appearance. Kelly was just too much for the energetic rookie.
– Adrian Jaoude (w/ Cezar Bononi) defeated Joe Gacy
There was more NXT representation on the show with Jaoude and Bononi. Jaoude showed off his Brazilian kickboxing style with movement and striking.
– Leon Ruff (w/ Ayla Fox) defeated Barrett Brown
Impressive showing by both men in a wild one. The crowd in Ybor loved Leon and chanted him on with loud “Ruff Ruff” chants throughout.
– The Street Profits (Angelo Dawkins & Montez Ford) defeated Doom Patrol (Chris Dickinson & Jaka) to win the EVOLVE Tag Team Championship
This was far from an NXT match with some brutal strikes by Dickinson and Jaka on both Dawkins and Ford throughout. Ford even hit a piledriver towards the end of the match before the Profits took this one. The fans erupted and were surprised by the title change.
Dawkins and Ford cut a promo after the match saying they would remain champs and defend the titles in all the cities currently scheduled for EVOLVE shows coming up.
– Dante Marquis Carter vs. Mikey Spandex ended in a no contest
NXT’s Dan Matha destroyed them. Matha took the mic, ran down everyone, and challenged anyone in the back if they wanted to face a real man. He was answered by The Skulk, who offered him a spot in their scramble match.
– Adrian Alanis won the Skulk Scramble match against Liam Gray, Shawn Dean, and Dan Matha
This was a one fall to a finish match where only two wrestlers could be in the ring at a time. Matha abandoned the match as AR Fox had made his way to ringside.
– Fabian Aichner defeated Shane Strickland to win the EVOLVE Championship
This match built great and the crowd was shocked at the title change. Strickland had gone for the arm throughout and Aichner kept countering to escape. Strickland hit a Swerve Stomp from the top for a major near fall, but Aichner hit a series of moves and a huge sit-out powerbomb to become the new EVOLVE Champion.
– JD Drake defeated Darby Allin, Anthony Henry, Harlem Bravado, AR Fox (w/ Ayla Fox), and Austin Theory (w/ Priscilla Kelly) in a ladder match to win the vacant WWN Championship
This was an absolutely vicious ladder match. There was brawling all over the venue, slams on the ladders, and nonstop mayhem all over the place. Drake and his tag partner Henry worked together early on out of respect. But the further the match went, the more they wanted to win and began fighting each other.
Allin was taken out in the middle of the match and then returned near the finish. They all tried to make their way up the ladder, but Drake was the furthest up and took the championship down in front of everyone. The crowd celebrated with the new champion.