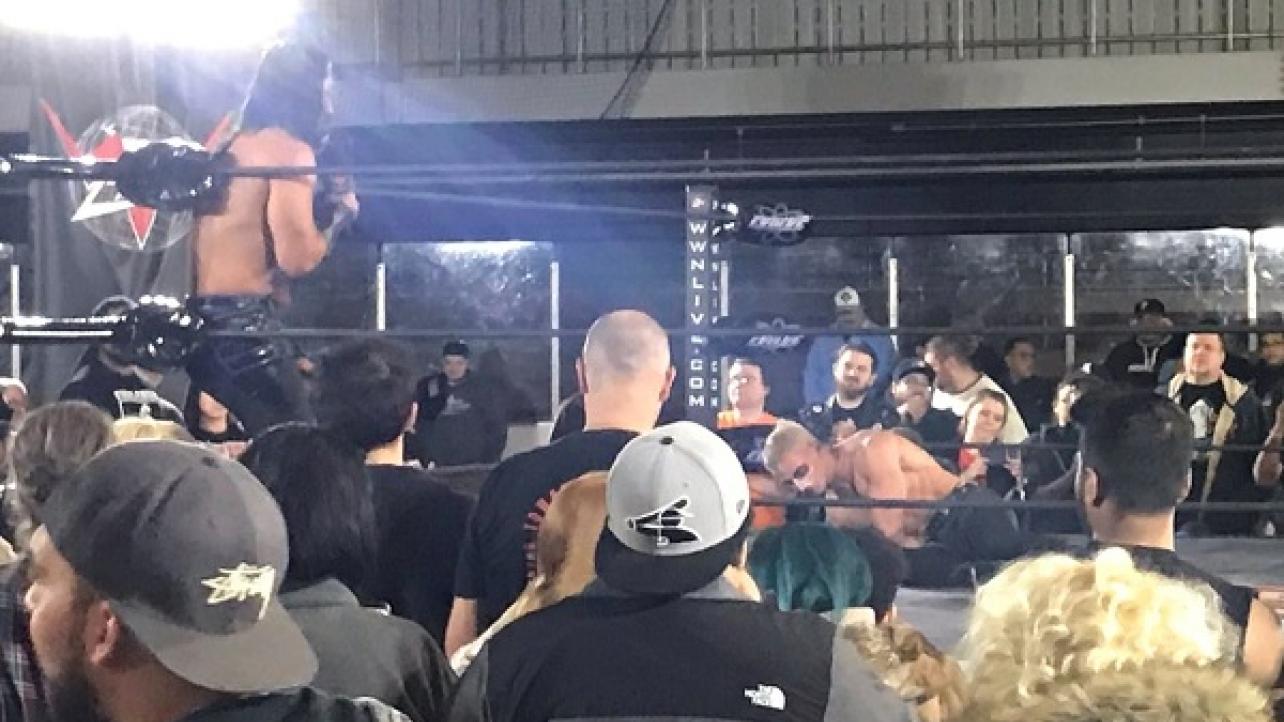 NXT Superstars defended titles and appeared in matches at the EVOLVE Wrestling events over the weekend — EVOLVE 115 and EVOLVE 116.

Featured below, courtesy of F4WOnline.com, are complete results of both shows.

– Barrett Brown defeated BSHP KNG
– Mike Fierro defeated Juntai
– Harlem Bravado defeated Leon Ruff, Adrian Alanis, and Jason Kincaid in a four-way match
Bravado stole the win by hitting his Straight Cash Homie finisher on Ruff.
AR Fox and The Skulk (Fox’s students) came out after, Fox said he was proud of Ruff and Alanis, and they were then interrupted by Austin Theory and Priscilla Kelly.
Kelly said that Theory is Fox’s most successful student. Theory said he should be The Skulk’s role model and coach and that Fox feeds off the careers of his students.
– Austin Theory defeated AR Fox
Theory stole the quick win with a roll-up after Kelly knocked down Ayla Fox on the outside and Fox was checking on her.
As Theory and Kelly were heading to the back, Fox asked for one more match. Fox said it would be an unsanctioned fight. If Theory wins, Theory gets The Skulk and Fox’s wrestling school. If Fox wins, Theory has to show them respect. Theory accepted the challenge.
– Mustafa Ali defeated DJZ
Ali countered the ZDT into a sunset flip to get the win. DJZ got a WWE Cruiserweight title belt from a fan after the match, handed it to Ali, and Ali held it ahead of his match against Buddy Murphy at Survivor Series.
– Josh Briggs defeated Cody Vance
Briggs, who dealt with flight issues to get to the show, won quickly with the M5 (chokeslam into double knees). Briggs then attacked Vance and gave him another M5.
– SHINE Champion Allysin Kay defeated Shotzi Blackheart to retain her title
Kay retained with a discus lariat. She helped Blackheart up after the match but then pushed her.
– EVOLVE Tag Team Champions The Street Profits (Angelo Dawkins & Montez Ford) defeated WWN Champion JD Drake & Anthony Henry to retain their titles
Drake and Henry attacked The Street Profits as they were trying to get in the ring, but The Street Profits ended up retaining with their spinebuster/frog splash combo.
Ford got the pin on Drake and seemed to set up a future WWN Championship match against him as they got in a face off after the match.
– EVOLVE Champion Fabian Aichner defeated Kassius Ohno to retain his title
Aichner survived Ohno’s strikes and hit a sit-out powerbomb to retain after struggling to get Ohno up.
Anthony Henry came out, clapped for Ohno and Aichner, and called the match amazing. Henry said he’s sick and tired of being unappreciated and guys like Aichner coming in and taking spots. Ohno tried to talk to Henry, but Henry said he wants Aichner to go back to where he came from. Henry insulted Ohno and shoved him.
Ohno went to leave but got back into the ring to show Aichner respect.
– AR Fox defeated Austin Theory in an unsanctioned match
Ayla Fox brawled to the back with Priscilla Kelly near the end and AR Fox hit the Foxcatcher on Theory to retain control of his wrestling school and The Skulk.

– Jake Lander defeated Joey O’Riley in a Zero1 USA World Junior Heavyweight Championship number one contender’s match
– Adrian Alanis defeated Barrett Brown
– Josh Briggs defeated Jason Kincaid
Kincaid had Briggs on the top turnbuckle, but Briggs hit the M5 from the top rope for the victory.
– Freelance Wrestling Champion Isaias Velazquez defeated GPA to retain his title
Velazquez is the champion of the local Freelance Wrestling indie promotion and retained with a superkick and DDT.
– EVOLVE Champion Fabian Aichner defeated Anthony Henry by DQ
This was a non-title match. Henry thought he got the win with a double stomp, but Aichner got his foot on the ropes during the count. Henry argued with the referee and shoved him down for the disqualification.
JD Drake, Henry’s tag team partner, came out to talk sense into Henry and get him away from the referee.
Austin Theory and Priscilla Kelly made their way down, staring at Aichner as he left. Theory said he’s embarrassed Drake is WWN Champion because Drake doesn’t look like him.
Drake called Theory an entitled millennial and called out Theory’s lack of experience. Drake said he’s been busting his ass in the ring almost as long as Theory has been alive. Drake talked about all he’s sacrificed for the business to pave the way for people like Theory.
Drake told Harlem Bravado to come out for their triple threat WWN title match.
– WWN Champion JD Drake defeated Harlem Bravado and Austin Theory in a triple threat match to retain his title
After Theory had prevented him from getting the win earlier, Drake pinned Bravado by hitting his Drill Bit slam for the second time and a moonsault from the top rope. Drake and Theory teased fighting after the match before Theory left.
– Matt Knicks defeated Cyrus Satin, BSHP KNG, and Mike Fierro in a four-way match
Knicks stole the win by hitting Satin with a Michinoku driver after giving Fierro a superkick.
– Kassius Ohno defeated Shane Strickland
Ohno missed a moonsault off the top near the finish but got the better of a striking exchange by hitting the high-tension elbow for the win.
Anthony Henry came out after and said he’s frustrated. He said he’s been in the business for 15 years and new guys keep taking his opportunity. Henry called Ohno one of the greatest wrestlers he’s ever seen and said he wants to wrestle him.
Henry asked Ohno to accept his apology, but Ohno said he hasn’t heard one yet. Henry said he’s very sorry for what he did to Ohno, Aichner, and the referee from his match earlier. He again asked Ohno for a match.
Ohno said he accepted Henry’s apology, that he’d talk to some people, and that maybe they’d see each other in the ring sooner rather than later.
– EVOLVE Tag Team Champions The Street Profits (Angelo Dawkins & Montez Ford) defeated AR Fox & Leon Ruff to retain their titles
The Street Profits retained with their spinebuster/frog splash combo on Ruff after Dawkins ducked and Ruff accidentally took out Fox and The Skulk with a dive to the outside.
Ford cut a promo praising Fox, Ruff, and The Skulk and talked about returning home to Chicago. The Street Profits then partied in the ring with their opponents and The Skulk.
– Mustafa Ali defeated Darby Allin
This was also a homecoming for Ali. Allin refused to stay down despite the punishment he was taking from Ali. Allin got a couple of two counts, Ali countered into the Koji Clutch, and Allin lost after passing out in the move.
Ali cut a post-match promo saying he respects Allin because Allin has heart. Ali said he’s going to win the Cruiserweight Championship from Murphy at Survivor Series and wants to come back to EVOLVE in Chicago and give Allin a shot at the title.
Ali said Allin is on a long and difficult road, but if he stays on the path — he’ll get to where he wants to be. Allin was still disappointed over the loss and left the ring.
After thanking everyone for coming to the show, Ali pointed out that his wife and daughter were in the crowd, brought his daughter into the ring, and talked about what can happen if you work hard.