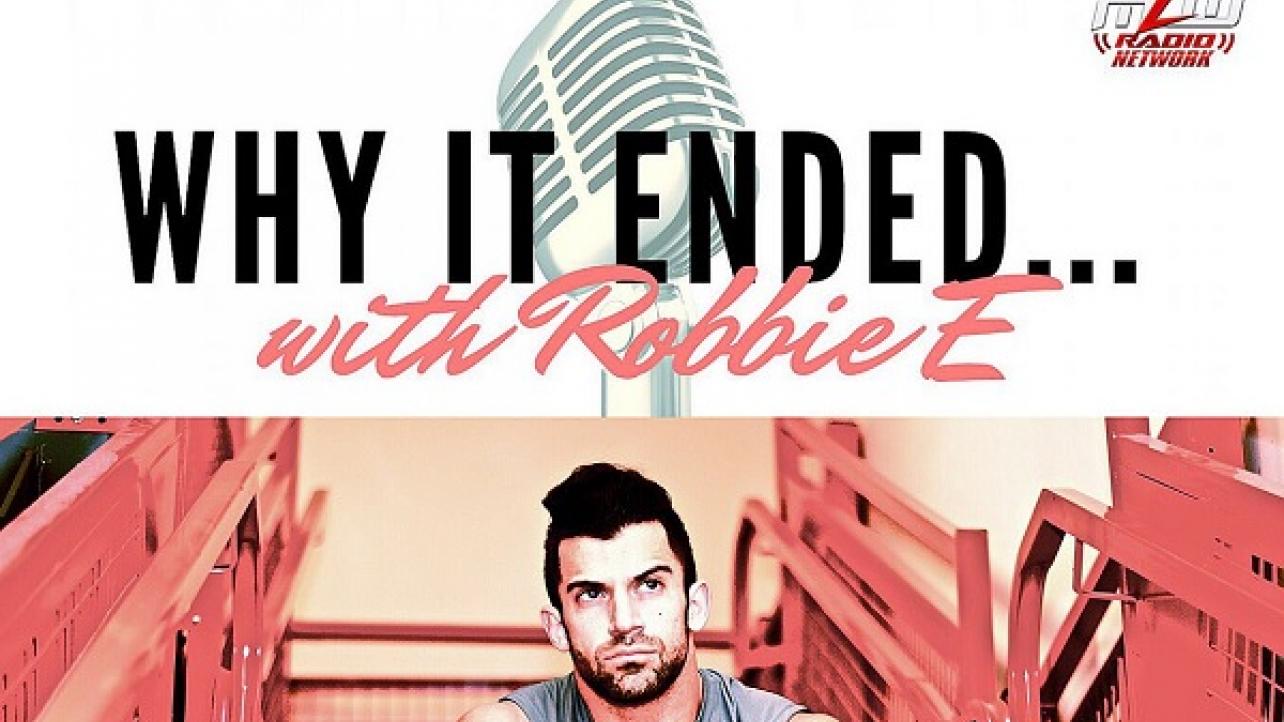 Former Impact Wrestling star and former cast member of The Amazing Race, Robbie E., has announced the launch of his own podcast.

Robbie E.’s podcast will be called Why It Ended… and will feature guests who have vanished from the pro wrestling scene and/or had brief runs on television.

Check out the official press release regarding the show, as well as social media comments from Robbie E., below.

A seemingly unlikely new wrestling podcast burst on the scene with it’s debut at 6 a.m. on Wednesday, March 14th; “WHY IT ENDED WITH ROBBIE E”. This brand new podcast joins the already crowded wrestling podcast scene with a different feel, concept, and approach, and quickly made it’s way to position 48 on the Sports and Recreation Podcasts Itunes charts within a day of its debut.

The concept, on the surface, is an updated version of “where are they now”; a past memorable talent known to wrestling fans is interviewed about their rise and disappearance from the public eye. The focus is on the dream of becoming a wrestler, and how, when, where, and of course, WHY (the dream) ended.

“I wanted to do something different” – Robbie E

” I had an inside look at a couple of the most successful podcasts in wrestling today, and I want to try to replicate that success by giving fans what I think they want. I am a fan, that’s all I can be or have been, so I like to think that the audience for the show is me” – producer/Co-Host Matt Koon

The idea was the brainchild of former Impact wrestler Robbie E, who brought the idea to Matt Koon and they have been spending the last two months developing and promoting it. Robbie had met Matt through his brief period of working on the Terri Runnels podcast, and knew he was the person to bring it to because of his experience producing “Something to Wrestle With Bruce Prichard” and “What happened When Mondays with Tony Schiavone” Koon had recently dipped his toe in the water of hosting podcasts, taking over for his mentor and friend Conrad Thompson the hosting duties of the Jonny Fairplay Podcast, and has taken the helm of the Madusa podcast on the recommendation of Thompson, as well as the Dutch Mantell podcast at the behest of Court Bauer on whose network, the MLWRadio podcast network, WHY IT ENDED appears.

The first episode features “Glacier” Ray Lloyd, and focuses on his run in WCW, the original plans for the “Blood Runs Cold” vignettes (he was to debut as part of a faction with Chris Kanyon, Bryan Clark, and Ernest Miller), why the debut was delayed (The Hulk Hogan Turn at bash of the beach along side the one week at a time debut of the NWO, which was going to be the template for Glacier’s faction’s debut), how he got signed to a three year contact after meeting Eric Bischoff for the first time over a steak dinner, and much much more.

“The future of this podcast is bright, I am shocked by how well it has been received, and I know this is going to continue to grow and become something the fans enjoy. We want to bring the fans the “Glaciers” but also we plan on some people like Air Paris and Cherry, people who captured the public imagination for a brief moment and the disappeared” – Robbie E

“If I could just name a few people I would want to have on future episodes, I would say Muhammad Hassan, David Flair, and Maven” – Matt Koon

Why it Ended debuts new episodes every Wednesday at 6 a.m. on Itunes, Whyitended.com, and MLWRADIO.COM.

I know, I get it… there are so many #wrestlingpodcasts … BUT, this is different! This is mine! Proud to announce I have signed a contract with @MLW and 1 week from today MY show “Why it ended” debuts on the #mlwnetwork … pic.twitter.com/dFWQtZt7mH

This #podcast will have weekly guests that ya probably have forgotten about, guys and gals who have vanished and aren’t on the scene nor have been since there short lived tv runs (some really short)…

This drops every Wednesday at 6:00 A.M. on @itunes and all your other podcast providers as well as https://t.co/mNT9atW8eV I PROMISE it’s unlike any podcast that you have heard and we know you will enjoy and learn from these great unheard stories… #wrestlingpodcast #whyitended